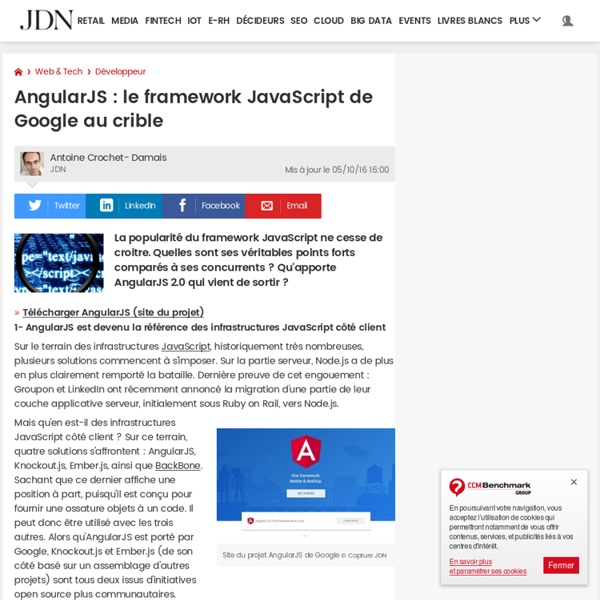 RECESS Overview Developed at Twitter to support our internal styleguide, RECESS is a simple, attractive code quality tool for CSS built on top of LESS. Incorporate it into your development process as a linter, or integrate it directly into your build system as a compiler, RECESS will keep your source looking clean and super managable. Installation Run the following line in your terminal: $ npm install recess -g French Forum Home Screenshots Showcase Features Download Purchase Comparing Angular, Aurelia and React: Is there a next-gen JS framework that rules them all? Angular is by far the most popular Javascript framework on the market. With the developer preview of Angular 2.0 now available, we decided to check how the developer preview of the framework compares to its main competitors, React and Aurelia. Does Angular remain king, or will one of the others take its place on the throne? The main reason for Angular's popularity is that it's quite easy to create a robust single page app. Various modules can contain various assets, like controllers, services, factories etc. and the 'separation of concerns' principle is applied to great effect, i.e. when using directives to create custom components. As such, Angular has proven to be a refreshing alternative to other frameworks from the 'jQuery era', which didn't advocate a clean division between logic (JS), representation (HTML DOM) and layout (CSS).

Gavin Dudeney: Digital Literacy Primer Take a quick tour around the education systems of the world and you’ll increasingly hear talk of ‘21st century skills’ (the USA and the UK), ‘new media literacies’ (the USA), ‘digital literacy skills’ (Australia) and, perhaps more commonly, discussions to ensure that learners acquire the ‘digital competences’ (Norway and Spain, to name but a couple) they will need in an ever-more connected world, and workplace. But just what are these ‘new’ literacies? An umbrella term for the media literacy skills and digital competences which appear in national curricula, digital literacies refer to our ability to effectively make use of the technologies at our disposal. We are not just talking about a checklist of technical skills, but also about the social practices that surround the use of new media. So not just knowing how to create a blog entry, but knowing how to use this to connect with a wider community of readers and writers, and what sort of online persona one projects though one's post.

$q A service that helps you run functions asynchronously, and use their return values (or exceptions) when they are done processing. This is a Promises/A+-compliant implementation of promises/deferred objects inspired by Kris Kowal's Q. $q can be used in two fashions --- one which is more similar to Kris Kowal's Q or jQuery's Deferred implementations, and the other which resembles ES6 (ES2015) promises to some degree. Modules · nodejs/node-v0.x-archive Wiki This page is deprecated. Feel free to add to it, but be advised that it is, at best, a faded relic of Node modules that were written before npm was a dominant force in the Node.js ecosystem. It is not all that useful any more. If you are a newcomer, it can be handy to at least get a starting point. However, note that there are many tens of thousands of modules in the npm registry, and only just under 2,000 modules here.

How to Install APK Files to Galaxy Gear! [Win/Mac/Linux] Download this video for viewing in HD on your smartphone or computer. Click Here to Download High-Quality HD video to your Smartphone or Computer. I know many of you requested me to show you how to install APK files to your Galaxy Gear using ADB and this will allow you to install any regular Android apps onto your Galaxy Gear. Now, not all Android apps work out of the box on the Galaxy Gear but you will find many do work including Nova launcher, which can give you a fresh, vanilla Android UI over Galaxy Gear’s watch UI. By installing APK files to your Galaxy Gear, you can essentially turn it into a standalone Android device.

React vs AngularJS vs KnockoutJS: a Performance Comparison This article will compare the performance of React JS vs Angular JS vs Knockout JS in three different browsers: Chrome, Firefox, and Safari. I’ve recently written an article comparing React JS and Angular JS, and it’s been getting a fair bit of attention, so I figured I’d go one step further and show how well each of the two perform. I’ve also added in Knockout JS to the mix here just for comparison’s sake, and also some raw JavaScript DOM manipulation to give a base line as to how well things work across the board.

Quick start Getting Started with jQuery Mobile jQuery Mobile provides a set of touch-friendly UI widgets and an AJAX-powered navigation system to support animated page transitions. Building your first jQuery Mobile page is easy. Here's how: Create a basic page template Pop open your favorite text editor, paste in the page template below, save and open in a browser.