AngularJs Multiselect Typeahead Directive - Angular Script. Node.js - libsass bindings not found when using node-sass in nodejs. AngularJS: About Those Custom Attributes... The first thing I noticed on the AngularJS homepage was the use of a non-standard attribute, ng-app: <div ng-app><div><label>Name:</label><input type="text" ng-model="yourName" placeholder="Enter a name here"><hr><h1>Hello ! 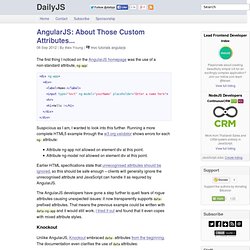 </h1></div></div> Suspicious as I am, I wanted to look into this further. Running a more complete HTML5 example through the w3.org validator shows errors for each ng- attribute: Attribute ng-app not allowed on element div at this point. Earlier HTML specifications state that unrecognised attributes should be ignored, so this should be safe enough – clients will generally ignore the unrecognised attribute and JavaScript can handle it as required by AngularJS. The AngularJS developers have gone a step further to quell fears of rogue attributes causing unexpected issues: it now transparently supports data- prefixed attributes. Knockout Unlike AngularJS, Knockout embraced data- attributes from the beginning. Directives Conclusion. Angular ui - angularjs ui-router - how to build master state which is global across app. Multiple Named Views · angular-ui/ui-router Wiki. ◄ Back (Nested States & Nested Views) Next (URL Routing) ► You can name your views so that you can have more than one ui-view per template. 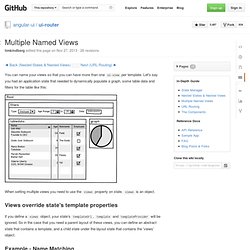 Let's say you had an application state that needed to dynamically populate a graph, some table data and filters for the table like this: When setting multiple views you need to use the views property on state. views is an object. Views override state's template properties If you define a views object, your state's templateUrl, template and templateProvider will be ignored. Angularjs - Correct way to integrate Jquery plugins in Angular.js. How do I "think in AngularJS" if I have a jQuery background? Dan Wahlin - Using an AngularJS Factory to Interact with a RESTful Service. What’s covered in this Post? 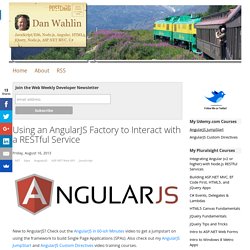 Creating a RESTful ServiceCreating an AngularJS ModuleCreating a FactoryCreating a Controller AngularJS provides a great framework for building robust Single Page Applications (SPAs) and provides built-in support for routing, MV*-style programming, services and factories, modules, testing, and much more. Although Angular can consume virtually any HTTP resource, in this post I’m going to focus on using it to consume a RESTful API created using ASP.NET Web API (note that any back-end service could be used). If you’ve worked with jQuery before then you’re used to calls such as $.getJSON() or $.ajax(). Although Angular plays really well with jQuery, it has built-in HTTP functionality that can be used out of the box and a way to encapsulate data functionality using factories or services. Here’s a quick review of some of the key players in AngularJS. Nested States & Nested Views · angular-ui/ui-router Wiki.

◄ Back (State Manager) Next (Multiple Named Views) ► Methods for Nesting States States can be nested within each other. 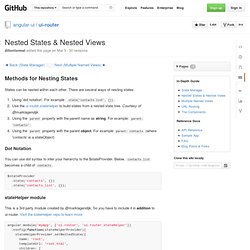 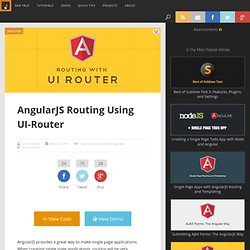 When creating single page applications, routing will be very important. We want our navigation to feel like a normal site and still not have our site refresh. We’ve already gone through Angular routing using the normal ngRoute method. Angular ui - angularjs ui-router - how to build master state which is global across app. Cacomania: Using nested views in AngularJS with UI-Router. The default AngularJS router works well, but has a very limited functionality. 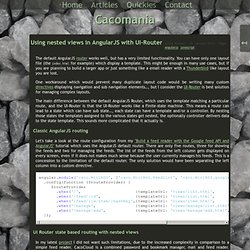 You can have only one layout file (the index.html for example) which display a template. This might be enough in many use cases, but if you are planning to build a larger app or just something like a email reader with a Thunderbird like layout you are lost. One workaround which would prevent many duplicate layout code would be writing many custom directives displaying navigation and sub navigation elements…, but I consider the UI-Router is best solution for managing complex layouts. The Definitive Guide to Angular on Mobile. Mobile apps are not the next frontier for software developers, they’re already here. 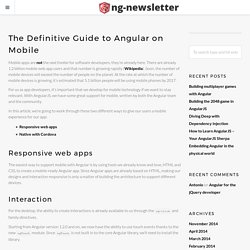 There are already 1.2 billion mobile web app users and that number is growing rapidly (Wikipedia). Soon, the number of mobile devices will exceed the number of people on the planet. At the rate at which the number of mobile devices is growing, it’s estimated that 5.1 billion people will be using mobile phones by 2017. For us as app developers, it’s important that we develop for mobile technology if we want to stay relevant. With AngularJS, we have some great support for mobile, written by both the Angular team and the community. Angularjs - Angular UI-Router multiple views. 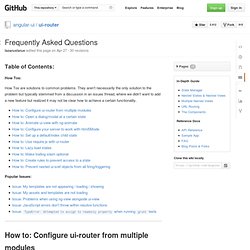 They aren't necessarily the only solution to the problem but typically stemmed from a discussion in an issues thread, where we didn't want to add a new feature but realized it may not be clear how to achieve a certain functionality. Creating a Single Page Todo App with Node and Angular. Today we will be creating a very simple Todo application using the MEAN (Mongo, Express, Angular, Node) stack. 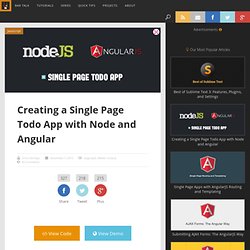 We will be creating: Single page application to create and finish todosStoring todos in a MongoDB using MongooseUsing the Express frameworkCreating a RESTful Node APIUsing Angular for the frontend and to access the API While the application is simple and beginner to intermediate level in its own right, the concepts here can apply to much more advanced apps. The biggest things we should focus on is using Node as an API and Angular as the frontend. Making them work together can be a bit confusing so this tutorial should help alleviate some confusion. 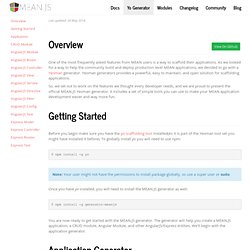 One of the most frequently asked features from MEAN users is a way to scaffold their applications. As we looked for a way to help the community build and deploy production level MEAN applications, we decided to go with a Yeoman generator. Yeoman generators provides a powerful, easy to maintain, and open solution for scaffolding applications. So, we set out to work on the features we thought every developer needs, and we are proud to present the official MEAN.JS Yeoman generator. It includes a set of simple tools you can use to make your MEAN application development easier and way more fun. Before you begin make sure you have the yo scaffolding tool installed(As it is part of the Yeoman tool set you might have installed it before) . $ npm install -g yo Note: Your user might not have the permissions to install package globally, so use a super user or sudo. Once you have yo installed, you will need to install the MEAN.JS generator as well: $ yo meanjs $ grunt.

Mongodb Mongod complains that there is no /data/db folder.