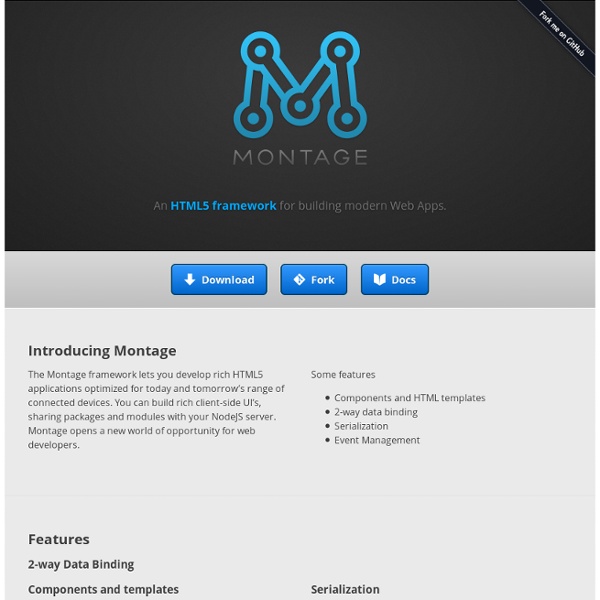 Bootstrap Customize Twitter Bootstrap To Not Look Bootstrap-y - Aj freelancer NOTICE: This article is outdated. Please read my article on how to build Bootstrap 3.0 themes the proper way. Thank you! PLEASE, if you do use Bootstrap for just about everything be courteous to your audience and change up some of the basic variables so it doesn’t look all the same! I just tested a really cool app and was SO disappointed that it used bootstrap. I used BootTheme. Have trouble coming up with a damn color scheme? Take an extra five minutes and figure out a good color combo. They have a “customize” page! Font Awesome because holy crap new icons with minimal 5 minute setup. Subtle Patterns is THE PLACE to go to for quick, beautiful patterns. Extras (updated) After writing this article and having it take off with tens of thousands of readers, I found a few NEW things you can do and that will help out: adjust shadow settings. Truth Be Told Update: I coded up a free bootstrap theme for everyone to see. I’m not asking for that much. A little bit of self promotion Other Resources

Less Framework 4 I called Less Framework "a CSS grid system for designing adaptive websites". It was basically a fixed-width grid that adapted to a couple of then popular screen widths by shedding some of its columns. It also had matching typographic presets to go with it, built with a modular scale based on the golden ratio. The resources it was originally published with are still available on GitHub. Contrary to how most CSS frameworks work, Less Framework simply provided a set of code comments and visual templates, instead of having predefined classes to control the layout with. /* Default Layout: 992px. Less Framework was popular in the early days of responsive design. Eventually, I moved on from fixed-width grid systems and worked on a fully fluid-width one, in the form of Golden Grid System. Less Framework's popularity was helped by the following contributions and the lovely people behind them (dead links crossed off):

jQuery: The Write Less, Do More, JavaScript Library User Interface UI Kit | Gumby Framework Introduction Gumby v2 is here. You haven't a moment to waste! Some things you will need with you on this journey are: A code editor of your choice (we recommend Sublime Text 2+)A decent knowledge of HTML/CSSA willingness to learnGoogle or comparable search engine. Some optional things that we recommend include: A web server (Apache or similar) Some basic knowledge of programming (variables, functions)General knowledge of the terminal Things that are NOT required are: Any specific web framework such as Rails, Codeigniter, etc. Browser Compatibility Gumby is developed following the latest standards and specs. ChromeFirefoxOperaInternet Explorer 8 – 10 We also support some of our elderly community of browsers down to IE 8. Options There are many ways you can work with Gumby. GUIs There are several GUIs out there that take the fear/mystery/fun out of using the terminal. Vanilla CSS You don't need to use Sass if you're all about retro things and living in the past. Terminal (It's not scary!) Mac Linux

jQuery UI - Home Skeleton: Beautiful Boilerplate for Responsive, Mobile-Friendly Development 20 Awesome Resources for Twitter Bootstrap Lovers Generators Bootstrap Custom Build Before diving into great third party Bootstrap resources, it’s worth pointing out a great little tool right from Twitter that allows you to completely customize an impressive range of Boostrap features so that you can create a custom build that’s perfect for your project. If you haven’t checked out Bootstrap in a while, you should give this a look because it’s new with Twitter Bootstrap 2.0. StyleBootstrap.info As with Twitter’s own tool above, this tool allows you to use a simple interface to customize various aspects of Bootstrap. The app itself is also more visual than Twitter’s generator and allows you to see what your styles will look like before you hit that download button. Beautiful Buttons for Twitter Bootstrappers This is a simple little tool that only does one thing: helps you design great looking buttons for use with Twitter Bootstrap. Theming BootstrapStyler “A beautiful, reusable set of Bootstrap themes for $39” WrapBootstrap Galleries For Mockups

Introduction to Sass for New WordPress Theme Designers As a new WordPress theme designer, you would quickly learn the challenges of maintaining long CSS files while keeping them organized, scalable, and readable. You will also learn that many designers and front-end developers recommend using a CSS preprocessor language like Sass or LESS. But what are these things? and how do you get started with them? What is Sass? The CSS that we use was designed to be an easy to use stylesheet language. It is very much like PHP which is a preprocessor language that executes a script on the server and generates an HTML output. Since version 3.8, WordPress admin area styles were ported to utilize Sass for development. Getting Started With Sass for WordPress Theme Development Most theme designers use local development environment to work on their themes before deploying it to a staging environment or a live server. First thing you need to do is to install Sass. For the sake of this article, you will need to create a blank theme. Managing Multiple Stylesheets