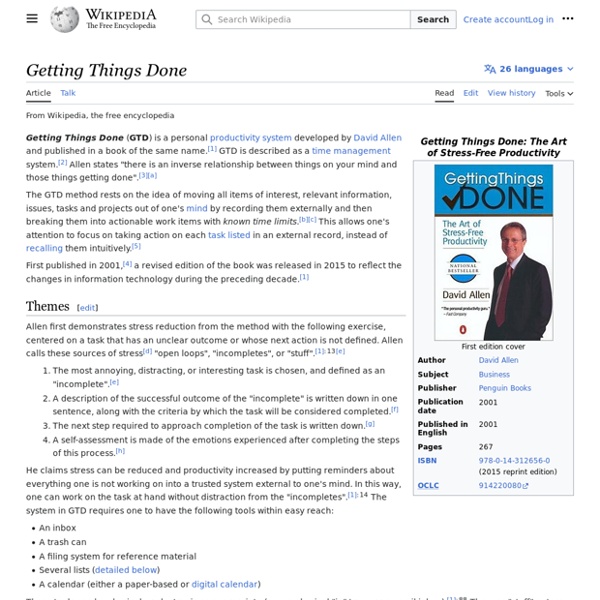 The GTD method rests on the idea of moving planned tasks and projects out of the mind by recording them externally and then breaking them into actionable work items. This allows attention to be focused on taking action on tasks, instead of recalling them.[2] First published in 2001, a revised edition of the book was released in 2015 to reflect the changes in information technology during the preceding decade. Themes[edit] Allen first demonstrates stress reduction from the method with the following exercise, centered on a task that has an unclear outcome or whose next action is not defined. Allen calls these sources of stress "open loops", "incompletes", or "stuff".[1]:13 He claims stress can be reduced and productivity increased by putting reminders about everything you are not working on into a trusted system external to your mind. Workflow[edit] Logic tree diagram illustrating the second and third steps (process/clarify and organize) of the five-step Getting Things Done workflow.

Exploring the 'Net and Star Trek with Pearltrees Over the past few days, you may have noticed that we've embedded a new tool known as Pearltrees in certain articles on TG Daily. As you can see, Pearltrees embeds a significant amount of supplemental information related to a post in a way that is easy to navigate, while giving you a chance to preview content before you even click a link. There's a lot more to Pearltrees, though. During a recent interview, the company told us they are engaged in building an expanding a comprehensive "social curation" community. What does this mean for you? Well, you can "team-up" with people who share your interests to curate a topic, thereby providing improved context, more depth and high-quality information.

Huge List Of GTD &amp; Productivity Sites/Blogs - Advice on organized and productive living through lifehacks and GTD One of the longest running and most respected productivity blogs on the net! Huge List Of GTD & Productivity Sites/Blogs Published on Jul 02, 2007 | Blogroll | 33 comments SlideShare The website gets an estimated 58 million unique visitors a month,[7] and has about 16 million registered users.[citation needed] SlideShare was voted among the World's Top 10 tools for education & e-learning in 2010.[8][9] SlideShare's biggest competitors include Scribd.com, Issuu and Docstoc. Some of the notable users of SlideShare include The White House, NASA, World Economic Forum, State of Utah, O'Reilly Media, Hewlett Packard and IBM. §Zipcasts[edit] In February 2011 SlideShare added a feature called Zipcasts.[10] A Zipcast is a social web conferencing system that allows presenters to broadcast an audio/video feed while driving the presentation through the Internet.

Prezi Prezi is a cloud-based (SaaS) presentation software and storytelling tool for presenting ideas on a virtual canvas.[1][2][3][4][5] The product employs a zooming user interface (ZUI), which allows users to zoom in and out of their presentation media, and allows users to display and navigate through information within a 2.5D or parallax 3D space on the Z-axis. Prezi was officially established in 2009 by co-founders Adam Somlai-Fischer, Peter Halacsy and Peter Arvai. History[edit] Prezi (or Prezi.com) was created by the support of Kitchen Budapest and Magyar Telekom in 2008 in order to replace the ordinary slide based presentations. Today the project is assisted by Sunstone Capital. holykaw.alltop Brilliant ideas strike people all the time. Perhaps you’ve been inspired at some point with the notion for an innovative product or process. But it takes more than just some clever firing of the brain circuits to turn an invention idea into a working, tangible product. And then it takes even more work to develop it into a mass-market phenomenon This article offers a brief look at the labor-intensive, potentially lucrative process of bringing an invention to market. The obstacles inventors must hurdle to come up with a good idea, legally protect it and entice people to buy it are tremendous.

Stop Organizing Your E-mail, Says Study - Technology Review (Build 20110413222027) If you’re the type to meticulously file your emails in various folders in your client, stop, says a new study from IBM Research. By analyzing 345 users’ 85,000 episodes of digging through old emails in search of the one they needed, researchers discovered that those who did no email organizing at all found them faster than those who filed them in folders. By using search, the non-organizers were able to find the email they needed just as easily as filers. They also didn’t have to spend any time filing email in folders, putting them ahead overall.

Google Drive Google Drive is a file storage and synchronization service provided by Google, released on April 24, 2012,[4][5] which enables user cloud storage, file sharing and collaborative editing. Rumors about Google Drive began circulating as early as March 2006.[6] Files shared publicly on Google Drive can be searched with web search engines. Google Drive is the home of Google Docs, an office suite of productivity applications, that offer collaborative editing on documents, spreadsheets, presentations, and more. Storage[edit] Google offers all users an initial 15 GB of online storage space, that is shared across three of its most-used services: Google Drive, Gmail, and Google+ Photos[7] (aka Picasa Web Albums).[8] Users can upgrade their free 15 GB account through a paid monthly subscription plan to get additional storage.[8] Documents using Google Docs native formats (including .gdoc, .gslides, and .gsheet) do not count towards this quota. Client[edit]

Twitter History Creation and initial reaction Twitter's origins lie in a "daylong brainstorming session" held by board members of the podcasting company Odeo. Dorsey, then an undergraduate student at New York University, introduced the idea of an individual using an SMS service to communicate with a small group.[15][16] The original project code name for the service was twttr, an idea that Williams later ascribed to Noah Glass,[17] inspired by Flickr and the five-character length of American SMS short codes. The developers initially considered "10958" as a short code, but later changed it to "40404" for "ease of use and memorability.