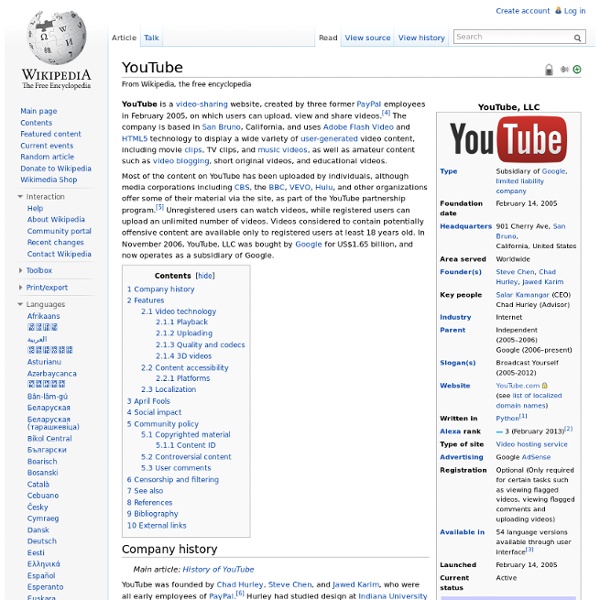 YouTube is a video-sharing website, created by three former PayPal employees in February 2005 and owned by Google since late 2006, on which users can upload, view and share videos.[4] The company is based in San Bruno, California, and uses Adobe Flash Video and HTML5 technology to display a wide variety of user-generated and corporate media video content, including video clips, TV clips, and music videos, and amateur content such as video blogging, short original videos, and educational videos. Most of the content on YouTube has been uploaded by individuals, but media corporations including CBS, the BBC, Vevo, Hulu, and other organizations offer some of their material via YouTube, as part of the YouTube partnership program.[5] Unregistered users can watch videos, and registered users can upload an unlimited number of videos. Videos considered to contain potentially offensive content are available only to registered users affirming themselves to be at least 18 years old. Company history

Electric guitar Invented in 1931, the electric guitar became a necessity as jazz musicians sought to amplify their sound in the big band format. During the 1950s and 1960s, the electric guitar became the most important instrument in pop music.[1] It has evolved into a stringed musical instrument that is capable of a multitude of sounds and styles. It served as a major component in the development of rock and roll and many other genres of music. History[edit] The "Frying Pan", 1932 The need for the amplified guitar became apparent during the big band era as orchestras increased in size, particularly when guitars had to compete with large brass sections. Gibson Les Paul Custom 1954 The first solid body "Spanish" standard guitar was offered by Vivi-Tone no later than 1934. Gibson's first production electric guitar, marketed in 1936, was the ES-150 model ("ES" for "Electric Spanish"; and "150" reflecting the $150 price of the instrument, along with matching amplifier). In 1945, Richard D. Construction[edit]

Google Makes New YouTube Channel Creation Easier For Those With Multiple Channels Google announced a new small but helpful feature for YouTube today. Now when you go to create a new channel, you’ll have the option to have it connected with a Google+ Page. This makes it easier for channel creators that already have other channels. As YouTube software engineer Brett Hobbs explains, “Previously, every channel you created needed to have its own Google account login. If you’re a creator that manages many channels, you might even have a spreadsheet to organize the various email addresses and passwords you use to log in to your channels.” “We made a significant improvement to the multiple channel management experience recently when we launched the option to connect your existing channels with a Google+ page,” he notes. Now with the new feature, things are just easier right from the start. Of course this also means that those who go to create YouTube channels for the first time will be encouraged to use a Google+ page, and that can’t hurt for Google+ usage.

Skateboarding A skateboarder in mid flight performing a trick Skateboarding is an action sport which involves riding and performing tricks using a skateboard. Skateboarding can also be considered a recreational activity, an art form, a job, or a method of transportation.[1] Skateboarding has been shaped and influenced by many skateboarders throughout the years. A 2002 report found that there were 18.5 million skateboarders in the world. 85 percent of skateboarders polled who had used a board in the last year were under the age of 18, and 74 percent were male.[2] Since the 1970s, skateparks have been constructed specifically for use by skateboarders, Freestyle BMXers, aggressive skaters, and very recently, scooters.[3] History 1940s–1960s Skateboarding was probably born sometime in the late 1940s or early 1950s when surfers in California wanted something to surf when the waves were flat. "Today's skateboarders are founders in this sport - they're pioneers - they are the first. 1970s 1980s 1990s 2000–present

Interview with Tara Walpert Levy of Google & YouTube | AAF Thought Leadership 2013 Advertising Hall of Achievement Interview: Tara Walpert Levy, Managing Director, Ads Marketing, Google & YouTube Tara Walpert Levy brings 17 years of experience to Google, where she leads Ads Marketing for Google and YouTube. In this role, she is responsible for the company’s communications and market development for Google and YouTube’s advertising offerings, globally. On Tuesday, November 5th, Tara will be inducted, along with six others, into the American Advertising Federation’s Advertising Hall of Achievement. You came to Google with a passion to bridge the digital divide. When I came to Google a few years ago, Mary Meeker was still showing the significant gap between the time people spent on digital and the attention marketers gave to the medium. The traditional and digital worlds have evolved from fighting over which way is best to learning to take the best from each other. There’s no playbook; that’s the challenge. You’ve been spending a lot of time with YouTube lately.