How classrooms look around the world — in 15 amazing photographs 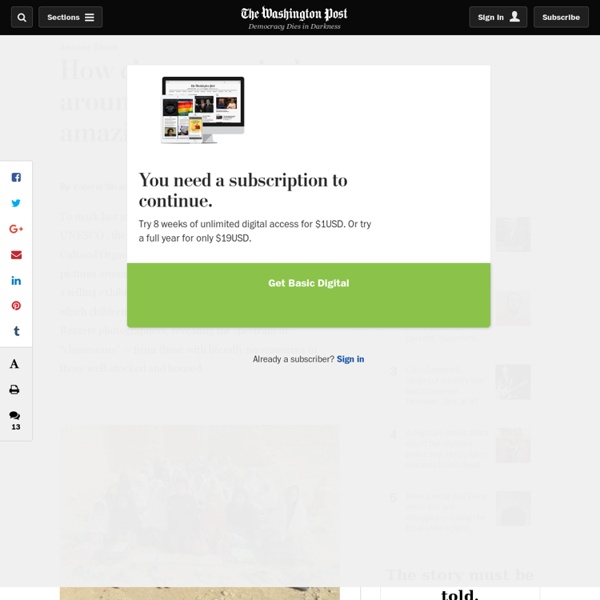 To mark last month’s World Teachers’ Day (sponsored by UNESCO , the United Nations Educational, Scientific and Cultural Organization), photographers from Reuters took pictures around the world of educators with their students in a telling exhibit of the very different circumstances under which children attend school. Here are 15 pictures taken by Reuters photographers, revealing the spectrum of “classrooms” — from those with literally no resources to those well-stocked and housed. Teacher Mahajera Armani and her class of girls pose for a picture at their study open area, founded by Bangladesh Rural Advancement Committee (BRAC), outside Jalalabad city, Afghanistan September 19, 2015. (Reuters) Class one children aged between six and seven years old pose for pictures in their classroom at Gifted Hands Educational Centre in Kenya’s Kibera slum in the capital Nairobi, September 16, 2015. (Reuters) A class at Tyburn Primary School in Chatsworth, Durban, South Africa, September 15, 2015. local

Classroom Furniture: Does it impede or improve learning? *Donate to my Donor’s Choose Project: Any donations made before May 17th qualify for a dollar to dollar match when donors use the code LIFTOFF during check out. My first year teaching I remember spending the week before school setting up my new classroom. I hung pictures, organized my desk, and set up all of the desks and chairs into neat rows. I believed that putting students in rows facing the front of the room would make them easier to manage.

Global Learning This past year, students from around the world came together to collaborate on world issues affecting their communities, taking the concept of global learning and turning it into a reality. In GlobalCOlab (GCL), Students teaching students from around the world, has connected students and educators from different cultures and religions from around the world to cross-cut disciplines, curricula, and traditional subjects to empower participants through student-led and student-created topics. These topics are based around global issues affecting each student’s community. GCL educators will discuss the need for an educational paradigm shift towards a global classroom in a one hour panel format.

30 Of The Most Powerful Images Ever A picture is worth a thousand words, but not all pictures are created equal. These pictures are powerful. They are gripping and unforgettable because of the volumes they speak about the human condition – about some of the best and worst moments of contemporary human existence. We should warn our readers that some of these pictures may upset them, while others may fill them with joy. But that’s precisely because these images reflect some of the best and worst parts of the human experience and world events. Education System in the USA Introduction In the USA, children start school when they are five or six years old. Depending on the state, schooling is compulsory until the age of 16 or 18. Children younger than five can go to a nursery school or preschool. At the age of five or six, the children attend elementary school (also known as grade school or grammar school), which last six years. The fist year at elementary school is called kindergarten.

Traveling Teaches Students in a Way Schools Can't When I turned 15, my parents sent me alone on a one-month trip to Ecuador, the country where my father was born. This was tradition in our family—for my parents to send their first-generation American kids to the country of their heritage, where we would meet our extended family, immerse ourselves in a different culture, and learn some lessons on gratefulness. My family’s plan worked. That month in Ecuador did more for my character, education, and sense of identity than any other experience in my early life. And five years later, my experience in Ecuador inspired me to spend more time abroad, studying in South Africa at the University of Cape Town.

Why I Decided Getting Rid of My Classroom Furniture Was the Best Thing for My Kids The following video features the AlphaBetter® Standing Desk with fidget bar that teacher Abby Brown and a local furniture company collaborated on when traditional furniture wasn’t working in her classroom. Watch it and then read on to find out why Abby gave in to her students’ need to fidget. As a teacher of more than 30 years, I’m a big supporter of fidgeting. I know this might sound a little unusual at first. We spend a lot of time telling students things like, “Sit still.” “Keep your hands to yourself.” Walking the Amazon On 9th August 2010, Ed Stafford became the first man to walk the length of the Amazon River in South America from the source to the sea. He walked for 860 days. No-one had ever done what he attempted. “Truly extraordinary… in the top league of expeditions past and present.” – Sir Ranulph Fiennes Ed filmed and blogged his deadly journey and engaged followers all over the world for two and a half years.

360 FREE Warmers, Ice-Breakers and Fillers For The ESL Classroom Planning a lesson is no easy task, especially if you're about to introduce a difficult topic. Sometimes, you need a little bit of something extra to really make your lesson flow. For this reason, ESL teachers usually use warmers and fillers. Warmers are used in lessons to ease the students into the topic you're going to present. United States – WebEnglish.se Related Native Americans, 7-9 Related topics: Thanksgiving, Year 3-7 Colonisation of North America 8-9 Background Native Americans Came to America in One Single Migratory came later than we originally thought—and in one single migratory wave. Colonization in the New informative text for the teacher about the British colonisation of the East… In "Intermediate"

Literacy Through Photography Blog For decades Wendy Ewald has collaborated in art projects with children, families, women, and teachers in Labrador, Colombia, India, South Africa, Saudi Arabia, Holland, Mexico, and the United States. Starting as documentary investigations of places and communities, Ewald’s projects probe questions of identity and cultural differences. In her work with children she encourages them to use cameras to record themselves, their families, and their communities, and to articulate their fantasies and dreams. Ewald herself often makes photographs within the communities she works with and has the children mark or write on her negatives, thereby challenging the concept of who actually makes an image, who is the photographer, who the subject, who is the observer and who the observed.

My Classroom Doors I have two doors in my classroom that are "growing" as we march through the year. I thought I would share their progress with you as this first semester ended. My front door is a year long record of our classroom learning. About the project In 2003, after The Earth seen from the Sky, Yann Arthus-Bertrand, with Sybille d’Orgeval and Baptiste Rouget-Luchaire, launched the 7 billion Others project. 6,000 interviews were filmed in 84 countries by about twenty directors who went in search of the Others. From a Brazilian fisherman to a Chinese shopkeeper, from a German performer to an Afghan farmer, all answered the same questions about their fears, dreams, ordeals, hopes: What have you learnt from your parents? What do you want to pass on to your children? What difficult circumstances have you been through? What does love mean to you?

The 50 most useful Idioms and their Meaning - A list on 1 page Commonly used Idioms Idiom: a manner of speaking that is natural to native speakers of a language Every language has its own collection of wise sayings. They offer advice about how to live and also transfer some underlying ideas, principles and values of a given culture / society.