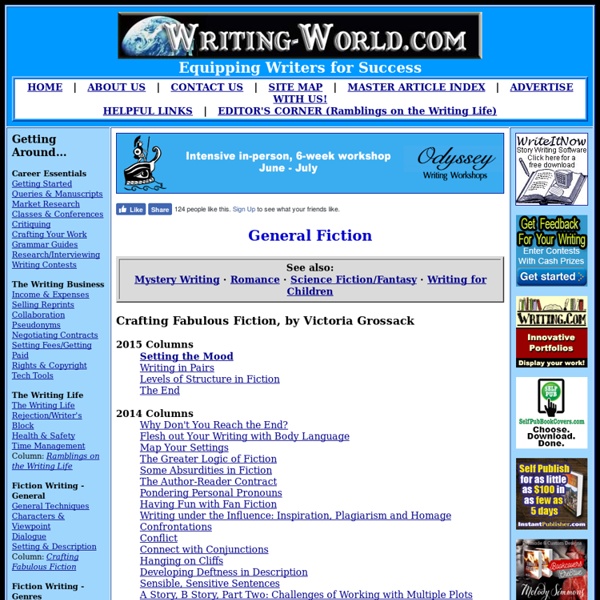 Creating a Realistic Fantasy World by Penny Ehrenkranz Did you ever wonder how David Eddings, Terry Brooks, Orson Scott Card, Stephen King, Piers Anthony, or J. R. How to Create an Instant Bestselling Novel How to Create an Instant Bestselling Novel by Cliff Pickover Please consider the following helpful tips. These will make it easier to get your stories or novels published. Jack Kerouac's Essentials of Spontaneous Prose Category: Writing Techniques SET-UPThe object is set before the mind, either in reality. as in sketching (before a landscape or teacup or old face) or is set in the memory wherein it becomes the sketching from memory of a definite image-object. PROCEDURETime being of the essence in the purity of speech, sketching language is undisturbed flow from the mind of personal secret idea-words, blowing (as per jazz musician) on subject of image. METHODNo periods separating sentence-structures already arbitrarily riddled by false colons and timid usually needless commas-but the vigorous space dash separating rhetorical breathing (as jazz musician drawing breath between outblown phrases)--"measured pauses which are the essentials of our speech"--"divisions of the sounds we hear"-"time and how to note it down." (William Carlos Williams)

Monomyth Joseph Campbell's monomyth, or the hero's journey, is a basic pattern that its proponents argue is found in many narratives from around the world. This widely distributed pattern was described by Campbell in The Hero with a Thousand Faces (1949).[1] Campbell, an enthusiast of novelist James Joyce, borrowed the term monomyth from Joyce's Finnegans Wake.[2] Campbell held that numerous myths from disparate times and regions share fundamental structures and stages, which he summarized in The Hero with a Thousand Faces:

How to Create Good Personalities for Your Characters Edit Article Sample Character DescriptionsCreating Personalities for Your Own Characters Edited by Secretive, Julia Maureen, Flickety, Ben Rubenstein and 19 others You're on a plane to a distant country to visit some weird old relatives you are somehow related to. In your hands, you hold a book that your friend recommended. But wait...as you begin to read you realize that the characters are really boring!

How To Write a Death Scene People often visit Creative Writing Corner searching for answers about how to write a death scene, so it’s about time that I gave my thoughts about it. I was first given the assignment to write a death scene as a stand-alone piece when I was a freshman in college, in my very first creative writing class. I chose to write a creative non-fiction piece about a relative of mine. The piece ended up being fairly successful; it was published in my college newspaper and I received a lot of very kind comments about it. Here are a few things I learned from that writing experience: Is Your Writing Any Good? Do you ever worry that your writing might not be much good? When I talk to writers, especially those who are just beginning to get their work out there in the world, one of the most common fears they have is “I’m not good enough.” All too often, I find myself surprised that they can’t see the strength of their own words.

36 Writing Essays by Chuck Palahniuk 1: Establishing Your Authority Chuck teaches two principal methods for building a narrative voice your readers will believe in. Discover the Heart Method and the Head Method and how to employ each to greatest effect. 2: Developing a Theme At the core of Minimalism is focusing any piece of writing to support one or two major themes.

8 ½ Character Archetypes You Should Be Writing Here’s the thing about character archetypes: everybody’s got his own take. Do you run with Joseph Campbell’s gazillion and one Jungian archetypes? How about Dramatica’s double quad of eight archetypes? Or maybe screenwriter Michael Hauge’s simple offering of four main players? Nothing wrong with running with all of them. How to Plot and Write a Novel: Plan Your Novel Writing with the Snowflake Method Many novelists mull over story ideas, letting them ripen and develop over time. When the story is ready to be told, instead of just sitting down and starting to type, try the Snowflake Method. This step-by-step way to write a novel begins with essential elements and becomes more detailed with each step. Essential Elements for Novel Structure Snowflakes have a structure which begins with a simple form and adds more elements to create complex patterns. Novelist and physicist Randy Ingermanson created the Snowflake Method to break novel-writing into steps that build on each other in the same way.

How Much of My World Do I Build? First, let me say that worldbuilding is an essential skill for every writer, regardless of genre. Not all writers need to concentrate on all areas of worldbuilding, but every writer must do some worldbuilding if he hopes to have a novel that is coherent, consistent, and real. Second, writers seem to come in three varieties — those who really have no idea what worldbuilding is or why they should bother with it; those who do know, but figure they’ll wing the details as they go; and those obsessive folks who secretly believe that they really can’t start the book until the whole planet is in place.