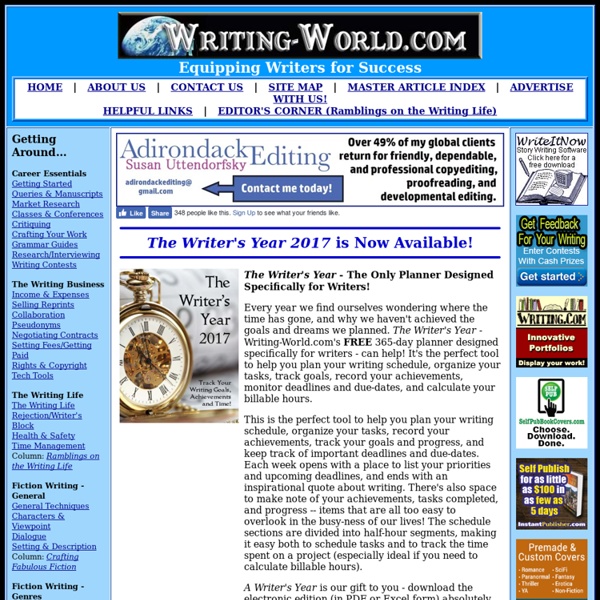 New on Writing-World.com Recent Articles Has it been awhile since you've dropped by? Here's what we've added to the site in the past six months... February 2014 Do You Hear Voices?

100 Useful Web Tools for Writers All kinds of writers, including poets, biographers, journalists, biz tech writers, students, bloggers and technical writers, take a unique approach to their jobs, mixing creativity with sustainability. Whether you’re a freelance writer just scraping by or someone with a solid job and more regular hours, the Internet can provide you with unending support for your practical duties like billing, scheduling appointments, and of course getting paid; as well as for your more creative pursuits, like developing a plot, finding inspiration and playing around with words. Turn to this list for 100 useful Web tools that will help you with your career, your sanity and your creativity whenever your write. Getting Organized Thanks to the Internet, disorganized writers are no longer a cliche. Keep track of appointments, interviews and deadlines with these handy web-based tools.

www.xmarkjenkinsx.com/outside.html Besançon Rome Rio de Janeiro Tudela London Dublin 102 Resources for Fiction Writing « Here to Create UPDATE 1/10: Dead links removed, new links added, as well as Revision and Tools and Software sections. Are you still stuck for ideas for National Novel Writing Month? Or are you working on a novel at a more leisurely pace? Write Better: 3 Ways To Introduce Your Main CharacterWritersDigest.com One of the biggest bugaboos in manuscript submissions is when the author doesn’t properly introduce the protagonist within the first chapter. Readers want to know quickly the protagonist’s sex, age and level of sophistication in the world of the story, and they want to relate to the character on an emotional level. Readers’ interest in the protagonist has to be earned, in other words.

Imaginative Package Designs - Design.inc Blog - StumbleUpon Imaginative Package Designs Packaging is a very important marketing strategy to glamorize a product in order to attract the consumer's attention. The 7-Step Write a Book Fast Program Post written by Leo Babauta. I’m often asked about writing (something I’ve done professionally for 22 years), and one of the most common things people want help with is writing a book. I’ve written a number of books, including 110,000 words of a novel in a month (in addition to blogging regularly), and numerous non-fiction books. I could share a lot of tips for writing a book, but my favorite secret is how I can write a book in just three days. I’ve written several books this way, and really, it’s the same process I used to write 110,000 words in a month.

Dream Dictionary The significance of dreams has probably been debated since people first developed the ability to communicate. Despite this, there's still no agreement on why we dream. It's hard to believe that dreams have no meaning at all, though, especially when it's so much fun to try to figure out what they're trying to tell us. Cliche Finder Have you been searching for just the right cliché to use? Are you searching for a cliché using the word "cat" or "day" but haven't been able to come up with one? Just enter any words in the form below, and this search engine will return any clichés which use that phrase... Over 3,300 clichés indexed! What exactly is a cliche?

For writers: hints - Mem Fox So you want to write a picture book… There’s some quick-and-snappy advice below, in case you’re in a hurry, but don’t forget to read the important list of 20 do’s and 20 don’ts, which you’ll find at the end of the first section. And there’s even more advice after that. Before I continue, however, you will discover, if you’re lucky, that the two most important people in anyone’s writing life are agents and editors. First you will need an agent to help you find a publisher; then the publishing house will assign you an editor. A book that’s accepted doesn’t mean it won’t change radically after an editor has cast an eye over it.

Related:
Related:  dianemarycowan2   -  Where the Writers Go to Write (Poetry, Stories, Contests and more!)   -  General Fiction   -  Dark Copy | Text Editor   -  Links for Aspiring Writers   -  Writer Unboxed – about the craft and business of fiction   -  Everyday Carry is EDC   -  100 Blog Topics I Hope YOU Write   -  stories_final   -  Internet Resources - Writers Resources - Writing Links & Writers Links for Writers - Fiction Writing   -  Rules for Comma Usage   -  Home   -  36 Writing Essays by Chuck Palahniuk | LitReactor   -  400 Writing Topics - Prompts and Suggestions for Paragraphs, Essays, and Speeches - Essay Topics   -  Creative Uses of Magic in Your Fantasy Story   -  Welcome to Teaching That Makes Sense!   -  General Journal Prompts - Journal Prompts   -  Dramatica - The Next Chapter in Story Development   -  My StoryMaker : Carnegie Library of Pittsburgh   -  Svbtle   -  How to Collage in Your Art Journals   -  How to Write a Short Story (with Sample Stories)   -  How to write a book now and finish   -  Notebooks - Your unique notebook on iPad, iPhone, Mac and PC   -  Skillswise - Spelling   -  The Writers Block. Writing resources for the students at PVCC   -  Tapas: Read and Discover Comics Online   -  Ten steps for writing an essay - School A to Z   -  Misktakes In Writing   -  How to Use Popular Music to Teach ESL   -  The best free software for writers 2017   -  70 useful sentences for academic writing   -  The Top 10 Relationship Words That Aren't Translatable Into English | Harpy's Review | Big Think   -  Fargo   -  Newspaper Blackout Poetry   -  5 Writing Exercises That Will Make You More Creative   -  Ten rules for writing fiction   -  Fidus Writer | an editor for academics   -  7 Big Reasons You Need Your Own Book