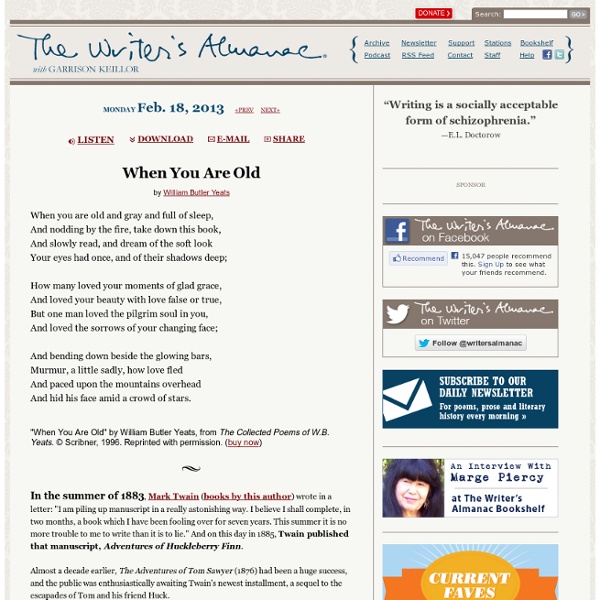 Quotes of the Day - Get daily quotes on Twitter. Follow us on Twitter and get more daily quotes!Don't forget to stop by the Motivational Quotes of the Day.Starling Fitness: Fitness weblog from the authors of The Quotations PageHear Motivational Quotes set to music at Affirmation StationStarling Travel: Travel weblog from the authors of The Quotations PageFind out what happened Today in History (Scope Systems)You can include these quotations on your own Web page.Read classic books, essays, plays, and poetry online at The Literature Page. If an author's name is highlighted, you can click it for more quotations by that author. Click on a quotation for more information about it, or click on the icons next to each quotation:

rudyard kipling 50 poems discovered Kipling scholars are celebrating the publication of lost poems by the author whose exhortations in "If" to "keep your head when all about you / Are losing theirs and blaming it on you" are regularly voted the nation's favourite poem. Discovered by the American scholar Thomas Pinney in an array of hiding places including family papers, the archive of a former head of the Cunard Line and during renovations at a Manhattan house, more than 50 previously unpublished poems by Rudyard Kipling will be released for the first time next month. The collection includes several poems dating from the first world war, which Kipling initially supported, helping his son John to gain a commission in the Irish Guards. A short poem, "The Gambler", finishes with the couplet: "Three times wounded; three times gassed / Three times wrecked – I lost at last", while another fragment runs: "This was a Godlike soul before it was crazed / No matter.

Where Should a Second Chapter Start? on October 12th, 2010 by Fiction Editor Beth Hill and last modified on October 12, 2010 We’ve all read advice about the first chapter—how and where to begin a story; what makes for strong openings, depending on the genre; what not to include in the first paragraph or page of chapter one; what to include in a novel’s opening. We understand that a good opening chapter sets the tone and introduces lead characters and gets the plot rolling. We know almost as much about the final chapter, the final paragraph, and the final words.

M-W Word of the Day "… so we repaired to a publick-house, took a friendly glass, and thus parted." — Peter Drake, Amiable Renegade: The Memoirs of Captain Peter Drake, 1671–1753, 1960 "… Warren repaired to the dining alcove off the kitchen … and ate dinner with Nina and the children, discussing their schoolwork and events of the day." — Kevin Starr, Embattled Dreams, 2002 We are all familiar with the verb repair used as a synonym of fix. But today's word, while it is a homograph and a homophone of the more familiar repair, is a slightly older and unrelated verb.

writing ideas Enter your e-mail to get the e-book for FREE. We'll also keep you informed about interesting website news. "I have searched the web and used different worksheets, but none have come close to your worksheets and descriptions of (what to do and what not to do). Both courses I have taken have with Creative Writing Now have been amazing. Each time I have learned something new. The one thing I love, you take everything apart and give examples." - Katlen Skye

20 Common Grammar Mistakes That (Almost) Everyone Makes I’ve edited a monthly magazine for more than six years, and it’s a job that’s come with more frustration than reward. If there’s one thing I am grateful for — and it sure isn’t the pay — it’s that my work has allowed endless time to hone my craft to Louis Skolnick levels of grammar geekery. As someone who slings red ink for a living, let me tell you: grammar is an ultra-micro component in the larger picture; it lies somewhere in the final steps of the editing trail; and as such it’s an overrated quasi-irrelevancy in the creative process, perpetuated into importance primarily by bitter nerds who accumulate tweed jackets and crippling inferiority complexes.

ancient egyptian poetry by PoetryGrrrl on February 17, 2014 the Temple of Ramses II at Abu Simbel. An excerpt from an article titled Ancient Egyptian Love Poems Reveal a Lust for Life by Cameron Walker for National Geographic News, pub. Seduction, Not Instruction (Part I) One of the first admonitions to a beginning writer is to "Show not Tell". Let me start this two-part article by saying I hate this adage, that I find it misleading, confusing and often next-to-useless. I might add that for years I didn't understand what it meant and agonised over why my own writing was flat.