How to Find Your Purpose and Do What You Love 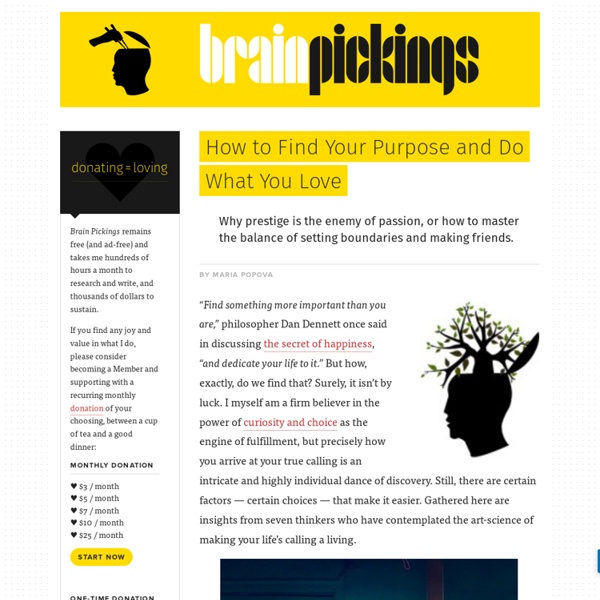 “Find something more important than you are,” philosopher Dan Dennett once said in discussing the secret of happiness, “and dedicate your life to it.” But how, exactly, do we find that? Surely, it isn’t by luck. I myself am a firm believer in the power of curiosity and choice as the engine of fulfillment, but precisely how you arrive at your true calling is an intricate and highly individual dance of discovery. Still, there are certain factors — certain choices — that make it easier. Gathered here are insights from seven thinkers who have contemplated the art-science of making your life’s calling a living. Every few months, I rediscover and redevour Y-Combinator founder Paul Graham’s fantastic 2006 article, How to Do What You Love. What you should not do, I think, is worry about the opinion of anyone beyond your friends. More of Graham’s wisdom on how to find meaning and make wealth can be found in Hackers & Painters: Big Ideas from the Computer Age. 16. 28. This is your life.

14 Lies Your Mind Tells You to Prevent Life Changes The mind is a wonderful thing. It’s also a complete liar that constantly tries to convince us not to take actions we know are good for us, and stops many great changes in our lives. Scumbag mind. I’ve had to learn to watch these rationalizations and excuses very carefully, in order to make the changes I’ve made in my life: a healthier diet, regular exercise, meditation, minimalism, writing daily, getting out of debt, quitting smoking, and so on. If I hadn’t learned these excuses, and how to counter them, I would never have stuck to these changes. In fact, I failed many times before 2005 (when I started changing my life), because these excuses had complete power over me. Practice the Change You Wish to See in the World Life is a practice and what you choose to practice is what will make up your character. It’s worth considering what you value in life and then making an intention and plan to live alongside those values. This is the direct back to living Ghandi’s words, “Be the change that you wish to see in the world.” Consider how simple it really is:

Marxism Marxism is a worldview and a method of societal analysis that focuses on class relations and societal conflict, that uses a materialist interpretation of historical development, and a dialectical view of social transformation. Marxist methodology uses economic and sociopolitical inquiry and applies that to the critique and analysis of the development of capitalism and the role of class struggle in systemic economic change. In the mid-to-late 19th century, the intellectual tenets of Marxism were inspired by two German philosophers: Karl Marx and Friedrich Engels. Marxist analyses and methodologies have influenced multiple political ideologies and social movements. Marxism encompasses an economic theory, a sociological theory, a philosophical method, and a revolutionary view of social change.[1] Marxism builds on a materialist understanding of societal development, taking as its starting point the necessary economic activities required to satisfy the material needs of human society.

Why Are Hundreds of Harvard Students Studying Ancient Chinese Philosophy? Picture a world where human relationships are challenging, narcissism and self-centeredness are on the rise, and there is disagreement on the best way for people to live harmoniously together. It sounds like 21st-century America. But the society that Michael Puett, a tall, 48-year-old bespectacled professor of Chinese history at Harvard University, is describing to more than 700 rapt undergraduates is China, 2,500 years ago. Puett's course Classical Chinese Ethical and Political Theory has become the third most popular course at the university.

7 Smart Ways to Deal with Toxic People Don’t let toxic people rent space in your head. Raise the rent and get them out of there. Surviving the ups, downs, and lightning storms of other people’s moodiness can be quite a challenge. It’s important, though, to remember that some moody, negative people may be going through a difficult stage in their lives. How I Learned to Be Heard Rule #13 Tell A Tale Share a personal story with emotional appeal “The universe is made of stories, not of atoms.” — Muriel Rukeyser According to West Wing Writers, a speechwriting and communications strategy firm in D.C., 63 percent of people recall stories a speaker tells, yet only 5 percent can remember a single statistic — even when the speech includes vastly more statistics than stories. Since I work in a news company, I often share my personal story to tell people why I am passionate about the industry. The story goes like this: my Italian father was on a train in Paris when he noticed a group of soldiers bothering a Portuguese woman as she was trying to read a newspaper.

The Great Philosophers 8: Theodor Adorno Theodor Wiesengrund Adorno was born in Frankfurt in 1903 into a wealthy and cultured family. His father, a wine merchant, was of Jewish origin but had converted to Protestantism at university. Teddy (as his closest friends called him) was an extremely fine pianist from a young age. Until his twenties, he planned for a career as a composer, but eventually focused on philosophy.

16 Things I Wish They Had Taught Me in School I am 28 now. I don’t think about the past or regret things much these days. But sometimes I wish that I had known some of things I have learned over the last few years a bit earlier. That perhaps there had been a self-improvement class in school. 7 Strange Questions That Help You Find Your Life Purpose One day, when my brother was 18, he waltzed into the living room and proudly announced to my mother and me that one day he was going to be a senator. My mom probably gave him the “That’s nice, dear,” treatment while I’m sure I was distracted by a bowl of Cheerios or something. But for fifteen years, this purpose informed all of my brother’s life decisions: what he studied in school, where he chose to live, who he connected with, and even what he did with many of his vacations and weekends. After almost half a lifetime of work later, he’s the chairman of a major political party and a judge. He also ran for state congress in his 30s and barely lost. Don’t get me wrong.

Adam Leipzig only needs five minutes to help you find your life purpose Adam Leipzig @TEDxMalibu (photo: LyVell Gipson) Adam Leipzig’s 2012 TEDxMalibu talk lasted around 10 minutes but more than three years later, it still resonates with viewers. “It has been so overwhelming and so flattering to see the way so many people have watched the talk and responded to it,” he said. “I get easily 20 emails a week from people who have seen it; either giving me feedback about it or asking me questions.” The Great Philosophers 3: Epicurus The Ancient Greek philosopher Epicurus was born in 341 BC, on the island of Samos, a few miles off the coast of modern Turkey. He had an unusually long beard, wrote over three hundred books and was one of the most famous philosophers of his age. What made him famous was his skilful and relentless focus on one particular subject: happiness.