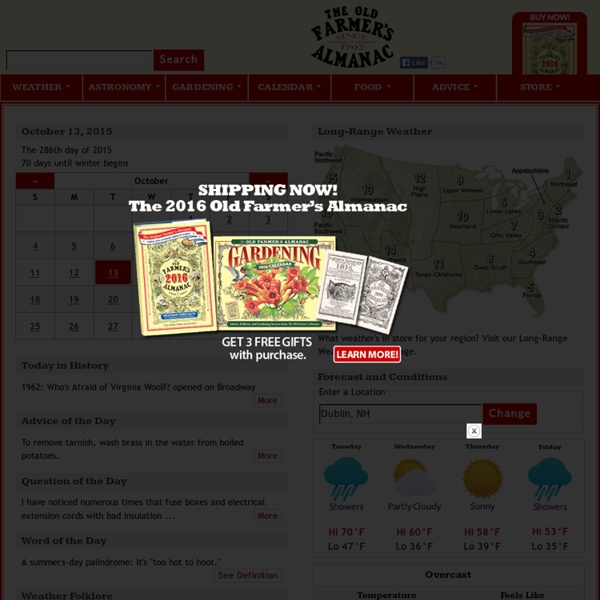 Phases of the Moon Enter a year between 1700 and 2035 in the form below and press the "Get Data" button to obtain a calendar showing the dates of the primary phases of the Moon for that year. Definitions For definitions of the phases, see the explanation of Phases of the Moon and Percent of the Moon Illuminated in the Astronomical Information Center. In addition, the explanation of Crescent Moon Visibility discusses the waxing crescent phase. Time Format The Autobiography of Benjamin Franklin - Chapter 1 Chapter One The Author's Reasons for undertaking the present Work---A Dissertation upon Vanity---Some Account of his Ancestors---He discovers that he is the youngest Son of the youngest Son for five Generations---Young Franklin is at first destined for the Church---His Father soon after takes him from School and emplys him as an Assistant in making Candles, Etc.---He is desirous of being a Sailor---Some Account of his youthful Frolicks--- Becomes greatly attached to Books---Is bound Apprentice to a Printer---Begins to study Composition---Adopts a vegetable Regimen---And is extremely fond of Disputation.

How to Tell Time Without a Clock: 14 steps (with pictures) Edit Article Sun PositionReading the MoonNorth Star Clock Edited by Jen, Nicole Willson, Dan McGillen, [UCF] grego and 50 others Celtic Zodiac Index Celtic Astrology was created by the Druids sometime around 1000BC. The Druid religion was based on 3 basic strands of belief: the first was to remember their ancestors and the past; the second was to have an understanding of nature so that they could work with it, not against it; and the third was to explore the connection of everyday reality with that of the spiritual realm. In Celtic astrology, the zodiac is based on the trees that the Druids held sacred. It was believed that the trees themselves expressed personal characteristics that could then be associated with particular months of the year.

The Rattlesnake as the Perfect Symbol of America - Benjamin Franklin's Letter The following letter was published in the Pennsylvania Journal on December 27, 1775. It was signed by "An American Guesser," recently identified as Benjamin Franklin. Written after the Revolution began but before the Declaration of Independence was signed, it offers a unique glimpse into Franklin's observant mind. The Rattlesnake as a Symbol of America I observed on one of the drums belonging to the marines now raising, there was painted a Rattle-Snake, with this modest motto under it, "Don't tread on me." But then "the worldly properties" of a Snake I judged would be hard to point out.

Sefer Ha-Bahir - The Book of Illumination Attributed to Rabbi Nehunia ben haKana What is the Sefer ha-Bahir? The Bahir is one of the oldest and most important of all Kabbalistic texts. Thoughts on the Present State of American Affairs Thoughts on the Present State of American Affairs IN the following pages I offer nothing more than simple facts, plain arguments, and common sense: and have no other preliminaries to settle with the reader, than that he will divest himself of prejudice and prepossession, and suffer his reason and his feelings to determine for themselves that he will put on, or rather that he will not put off, the true character of a man, and generously enlarge his views beyond the present day. Volumes have been written on the subject of the struggle between England and America. Men of all ranks have embarked in the controversy, from different motives, and with various designs; but all have been ineffectual, and the period of debate is closed. Arms as the last resource decide the contest; the appeal was the choice of the King, and the Continent has accepted the challenge.

Complete Sun and Moon Data for One Day Use these forms to obtain rise, set, and transit times for the Sun and Moon; civil twilight beginning and end times; and, lunar phase information. First, specify the date and location in one of the two forms below. Then, click the "Get data" button at the end of the form. Use Form A for cities or towns in the U.S. or its territories. Use Form B for all other locations. Both forms are immediately below.