Listen to 2,500-year-old music brought back to life 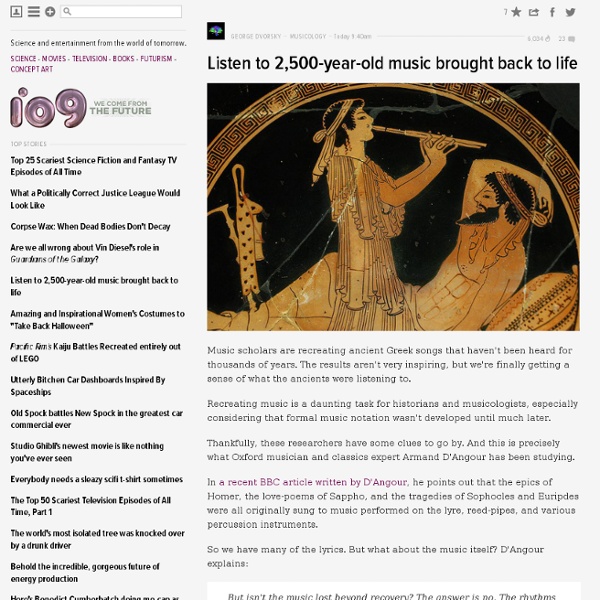 A Breathing Earth - CometBird Here's a view looking at one year of seasonal transformations on Earth. Made possible by the tremendous folks of the NASA Visible Earth team, I downloaded the twelve cloud-free satellite imagery mosaics of Earth ("Blue Marble Next Generation") at each month of the year. I wrapped them into some fun projections then stitched them together into a couple animated gifs... Don't click this small version or this tiny version. Click here to see the irrationally large version (8.9 MB). Don't waste your time with this boring small version or this lame tiny version. I of course had some expectation of what I would see as a result of animating these frames. Why? Of course there are the global characteristics of climate and the nature of land to heat and cool more rapidly than water. But, overall, to me it looks like breathing.

Phoenician music interpreted from cuneiform tablets that contain the Hymn to the Moon Goddess Nikhal Ancient Music Reaching back into ancient history, it is clear that music and musical instruments played a major part of all civilizations. The earliest known scrap of musical notation -- a hymn to the moon goddess Nikkal -- is discussed later in this essay. What is evident today is the fact that early civilizations bequeathed explorations of theory, systems of tunings, instruments, a range of appropriate occasions for music and an emphasis on specialization and technique. In Greek mythology, Apollo was supposed to have played a "civilized" string instrument. The earliest surviving "new music manifesto" was written in 420 B.C. by Timotheus of Miletus: "I do not sing the old songs: the new ones are the winners, and a young Zeus is king today." In Biblical records musical instrument are referred to on various occasions and circumstances. Also, the Book of Psalms contains musical notations which, though not understood today, were used to chant the Psalms. Phoenician Music Phoenician Art

Angel Haze Finally Does Justice To Macklemore's "Same Love" main Why not develop music in ways unknown? This only makes sense. I cannot understand the difference between my notes on paper and other notes on paper. If beauty is present, it is present. Emily Howell is a computer program created by David Cope during the 1990s. Dr Cope My name is Jenna Mattox, and I am a freshman at Nazareth College of Rochester. From Darkness, Light (Opus 1): Two Pianos 20:57. Intuit® | Website Building Software & Website Design 7 Wanted Criminals Who Made Mocking Police Into an Art Form #3. Kevin Poulsen, Hacker to the Stars Photos.com The Crime: You may know Kevin Poulsen as a writer and editor over at Wired.com, but before that he was quite the badass hacker-turned-fugitive. At the age of 17 (in 1983, the same year that WarGames came out, not surprisingly), Kevin "Dark Dante" Poulsen used his ancient TRS-80 computer to hack into the U.S. Enlightenlists.com"Let him go; you rookies captured early '80s Nicolas Cage again." The Audacity: Instead of laying low, Poulsen laid in on the hacking harder than ever, pulling one spectacular stunt after another. Thomas Lohnes/Getty Images News/Getty ImagesReason Number 14,381 to pay attention in computer science class. The coup de grace came when Poulsen was featured on the show Unsolved Mysteries: The 1-800 hotline mysteriously went dead as soon as Poulsen's face appeared on the screen. Thinkstock Images/Stockbyte/Getty ImagesToo bad. 1998 was a bad year to miss. #2. USA Today No-debts.com Pictured: Crazy Enough. #1. Nathan J.

Emily Howell Emily Howell is a computer program created by UC Santa Cruz professor of music David Cope during the 1990s. Emily Howell consists of an interactive interface that allows both musical and language communication. By encouraging and discouraging the program, Cope attempts to “teach” it to compose music more to his liking. The program uses only the output of a previous composing program called Experiments in Musical Intelligence (EMI)[1] as a source database for its musical choices. Emily Howell’s first album was released in February 2010 by Centaur Records (CRC 3023). References[edit] Jump up ^ David Cope (1987), "Experiments in Music Intelligence."

Western-backed resolution on Syria doomed? Published time: January 27, 2012 11:25 Edited time: January 28, 2012 08:39 The UN Security Council is due to consider a new resolution on Syria, which demands that the country’s authorities step down. Russia however has stated that the draft offered by the West and the Arab League has no chance of being passed as it is. ­"The UN Security Council will meet in closed consultations this Friday 3:00 pm in New York to discuss steps to take on the situation in Syria," France's UN mission Twitter page informed. The draft resolution was reportedly proposed by France and supported by the United States, the UK, Portugal, Germany and the Arab countries. According to the Itar-Tass news agency, the new draft will demand that the Syrian regime stop all violence in Syria, withdraw armed forces from inhabited areas and allow peaceful rallies. ­‘Fresh draft resolution unacceptable for Russia’ – top official “There are not even such elementary things as a reference to adherence to the UN Charter,” he said.