Everything You Wanted to Know about TOR & the Deep Web 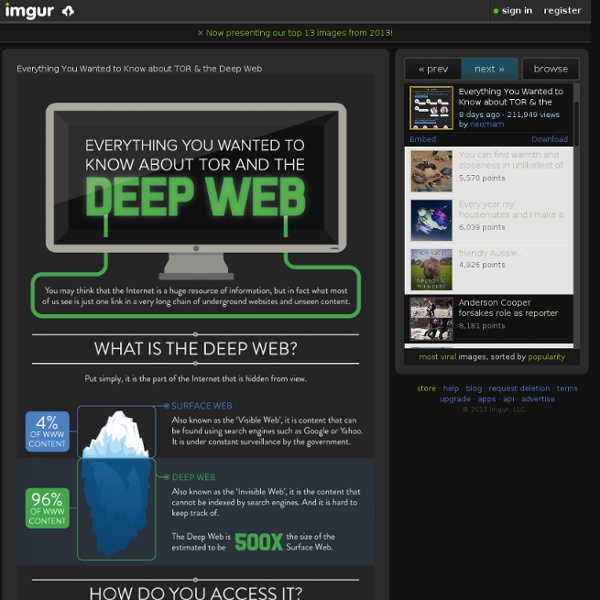 Snowden Used Common Web Crawler Tool To Collect NSA Files Eurasia Review By RT Whistleblower Edward Snowden used “inexpensive” and “widely available” software to gain access to at least 1.7 million secret files, The New York Times reported, quoting senior intelligence officials investigating the breach. The collection process was “quite automated,” a senior intelligence official revealed. Snowden used “web crawler” software to “search, index and back up” files. The program just kept running, as Snowden went about his daily routine. “We do not believe this was an individual sitting at a machine and downloading this much material in sequence,” the official said. Investigators concluded that Snowden’s attack was not highly sophisticated and should have been easily detected by special monitors. The whistleblower managed to set the right algorithm for the web crawler, indicating subjects and how far to follow the links, according to the report. “In at least one instance when he was questioned, Mr. About the author: RT Visit RT's website

Harvard University Bomb Hoax: How FBI Used TOR Network To Catch Suspect, Eldo Kim According to an affidavit filed on Tuesday, the FBI was able to locate 20-year-old Eldo Kim, who created a bomb hoax at Harvard University to avoid an exam, by using the Tor network. On Monday morning, Kim emailed multiple bomb threats to Harvard’s offices, police department, officials and the school newspaper. The subject line of the email read “bombs placed around campus,” and the body of the email read: shrapnel bombs placed in:science center sever hall emerson hall2/4. The whole thing thankfully turned out to be a hoax. But the FBI also noticed that Guerilla Mail had been accessed through Tor. “This is one of the problems of using a rare security tool,” Bruce Schneier, a security technician, wrote on his blog.

NSA XKeyscore targets german citizen involved in Tor encryption | Dirty Babylon A 27-year-old informatics student in southern Germany was identified in news reports on Thursday as the first German citizen known to be under surveillance by the National Security Agency since Chancellor Angela Merkel. The news came on the same day that two former American security officials testified to a parliamentary inquiry about reports of sweeping digital surveillance and monitoring in Germany by American intelligence, which touched off a major controversy and put strains on German-American relations. The student, Sebastian Hahn of Erlangen in Bavaria, said he had been active for six years in the Tor network, a group that works to encrypt digital communications, and that he had rented space on a computer in Nuremburg that he said was one of several around the world that direct other computers involved in Tor. Like this: Like Loading...