Working Links To The Deep Web 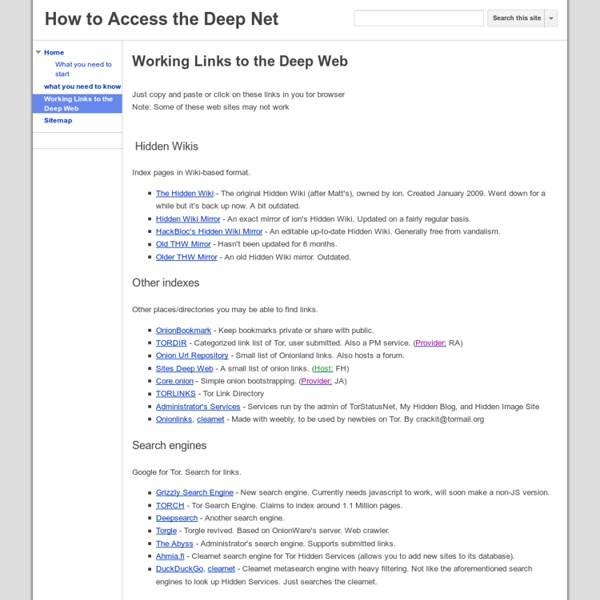 The Ultimate Guide to the Invisible Web Search engines are, in a sense, the heartbeat of the internet; “Googling” has become a part of everyday speech and is even recognized by Merriam-Webster as a grammatically correct verb. It’s a common misconception, however, that Googling a search term will reveal every site out there that addresses your search. Typical search engines like Google, Yahoo, or Bing actually access only a tiny fraction — estimated at 0.03% — of the internet. The sites that traditional searches yield are part of what’s known as the Surface Web, which is comprised of indexed pages that a search engine’s web crawlers are programmed to retrieve. "As much as 90 percent of the internet is only accessible through deb web websites." So where’s the rest? So what is the Deep Web, exactly? Search Engines and the Surface Web Understanding how surface pages are indexed by search engines can help you understand what the Deep Web is all about. How is the Deep Web Invisible to Search Engines? Reasons a Page is Invisible Art

100 Search Engines For Academic Research Back in 2010, we shared with you 100 awesome search engines and research resources in our post: 100 Time-Saving Search Engines for Serious Scholars. It’s been an incredible resource, but now, it’s time for an update. Some services have moved on, others have been created, and we’ve found some new discoveries, too. Many of our original 100 are still going strong, but we’ve updated where necessary and added some of our new favorites, too. Check out our new, up-to-date collection to discover the very best search engine for finding the academic results you’re looking for. General Need to get started with a more broad search? iSEEK Education:iSeek is an excellent targeted search engine, designed especially for students, teachers, administrators, and caregivers. Meta Search Want the best of everything? Dogpile:Find the best of all the major search engines with Dogpile, an engine that returns results from Google, Yahoo! Databases and Archives Books & Journals Science Math & Technology Social Science

Deepweb.to | your entry to the Deep Web, Darknet, Onionland, Tor, Hidden Wiki, Deepweb p0f v3 Copyright (C) 2012 by Michal Zalewski <lcamtuf@coredump.cx> Yeah, it's back! 1. What's this? P0f is a tool that utilizes an array of sophisticated, purely passive traffic fingerprinting mechanisms to identify the players behind any incidental TCP/IP communications (often as little as a single normal SYN) without interfering in any way. Some of p0f's capabilities include: Highly scalable and extremely fast identification of the operating system and software on both endpoints of a vanilla TCP connection - especially in settings where NMap probes are blocked, too slow, unreliable, or would simply set off alarms. Common uses for p0f include reconnaissance during penetration tests; routine network monitoring; detection of unauthorized network interconnects in corporate environments; providing signals for abuse-prevention tools; and miscellanous forensics. You can read more about its design and operation in this document. Fun fact: The idea for p0f dates back to June 10, 2000. 2. 3. 4. 5.

99 Resources To Research & Mine The Invisible Web College researchers often need more than Google and Wikipedia to get the job done. To find what you're looking for, it may be necessary to tap into the invisible web, the sites that don't get indexed by broad search engines. The following resources were designed to help you do just that, offering specialized search engines, directories, and more places to find the complex and obscure. Search Engines Whether you're looking for specific science research or business data, these search engines will point you in the right direction. Turbo10: On Turbo10, you'll be able to search more than 800 deep web search engines at a time. Databases Tap into these databases to access government information, business data, demographics, and beyond. GPOAccess: If you're looking for US government information, tap into this tool that searches multiple databases at a time. Catalogs If you're looking for something specific, but just don't know where to find it, these catalogs will offer some assistance. Directories

Did Hitler’s obsession with the occult lose him the war? | The Spectator When he came to power Hitler had a dowser scour the Reich Chancellery for cancerous ‘death rays’. Before flying to Scotland Rudolf Hess had his horoscope drawn up by a personal astrologer. Himmler backed research on the Holy Grail and medieval devil worship (‘Luciferism’) and sent an SS expedition by the explorer Dr Ernst Schafer to Tibet in 1938 to investigate the ancient Indo-German ‘Aryan’ origins of Buddhism. Himmler also founded the SS Witches Division, which collected evidence in eastern Europe in the second world war that Teutonic ‘wise women’ had been persecuted and burnt in a Jewish-Catholic Inquisition plot against volkisch German culture and blood. In 1939 Goebbles sat up late at night reading the prophecies of Nostradamus, which he revealed to an enthusiastic Führer as evidence that the British were soon to be defeated. The British had ASDIC or radar to find German U-boats: the German Navy had the Pendulum Dowsing Institute in Berlin.

Computer FrEaKs Top Free Proxy Server | Super Fast, Anonymous, and Secure Zenmap - Official cross-platform Nmap Security Scanner GUI Zenmap is the official Nmap Security Scanner GUI. It is a multi-platform (Linux, Windows, Mac OS X, BSD, etc.) free and open source application which aims to make Nmap easy for beginners to use while providing advanced features for experienced Nmap users. Frequently used scans can be saved as profiles to make them easy to run repeatedly. A command creator allows interactive creation of Nmap command lines. Scan results can be saved and viewed later. Saved scan results can be compared with one another to see how they differ. You can download Zenmap (often packaged with Nmap itself) from the Nmap download page. Here are some Zenmap action shots (click for full res):

15 Expert Google Drive Tips for Teachers By Jessica Sanders Google Drive makes your life easier and encourages collaboration and 21st century skill development among your students. Make sure you’re getting the most of out this free tool with these expert tips. 1. Use Google Docs templates. With more than 300 to choose from, you can create Pinterest-worthy docs in a fraction of the time. 2. 3. 4. 5. 6. 7. 8. 9. 10. 11. 12. 13. 14. 15. Hidden Masonic Links to the Legendary Treasure of Oak Island According to legend, a young man named McGinnis was wandering Oak Island, an island in the Mahone Bay off the coast of Nova Scotia in Canada, in the year 1795 when he came upon an oak tree where an old rope was tied to a branch. In front of it was ground that appeared to be slumped. Believing there might be buried treasure, he and two friends began to dig in the depression. Treasure Hunting on Oak Island The earliest treasure hunt on the island is said to have been in 1795 when the aforementioned group of treasure seekers discovered a layer of flagstones, a shaft, and some rotten wooden logs. Oak Island, Nova Scotia. ( Farhad Vladia / Panoramio ) These earlier accounts are probably partly apocryphal. After several years, the company was disbanded as no treasure was found. Creating the Oak Island Legend Over the past two centuries, the legend has built up to one that is quite detailed. Buried Treasure : Illustration of William “Captain” Kidd overseeing a treasure burial. ( Public Domain )