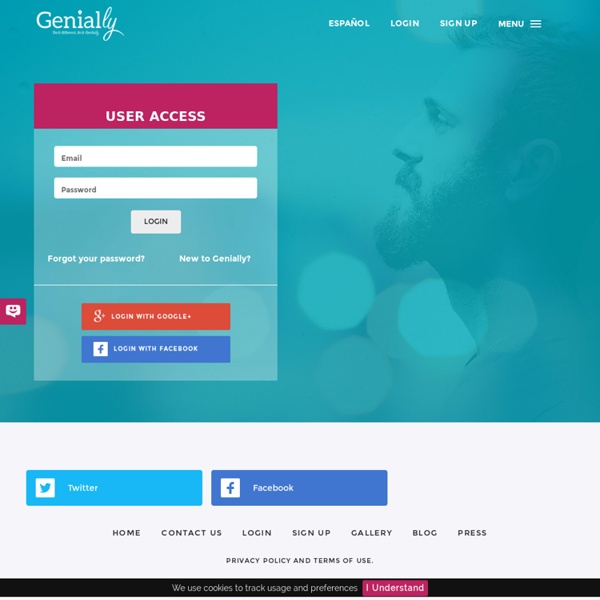 Comics and Cartoons There are so many good free tools for creating comics and cartoons on the web, as well as apps for tablets and smartphones. I've built out a list of fun tools I am looking forward to trying out over the upcoming holiday break. I can't wait to brainstorm creative ways to leverage these in lessons! Click to view original, large image Shakespeare and Nicki Minaj’s ‘Anaconda’: 15 seconds that will motivate your teenagers #15secondshakespeare is a new awesome Twitter trend similar to Ice Bucket Challenge. It involves people reciting a 15-second snippet of a popular song – anything from Taylor Swift to Gangnam Style – as dramatically as possible. Some famous actors have joined in and the results are HILARIOUS! For more details and example videos check out this information here:

‎PhotoSpeak: 3D Talking Photo dans l’App Store PhotoSpeak™ can transform any portrait photo into a moving 3D avatar that repeats your every word. You can make anyone come alive, just like the talking wall portraits in Harry Potter’s Hogwarts castle. *** How to use the app *** - Take a portrait photo or pick one from your photo library, and the face will automatically start moving in 3D. - Talk to it and it will repeat your every word. - Record your moving 3D avatar as a movie.

Zoom In - Set Up Your Class Create a Teacher Account Teacher accounts allow you to assess student progress and manage student accounts. Create a Class Spanish Proficiency Exercises Spanish Proficiency Exercises is a compilation of brief video clips in which native speakers of Spanish from various locations throughout Latin America and Spain demonstrate various language tasks. The objective of the exercises is to provide students of Spanish with the necessary tools to be able to talk about the same topics in Spanish. In order to do, this Spanish Proficiency Exercises contains five major components. First, there is a simplified video clip. This simplified version is scripted, the native speakers talks slower, and he or she uses simpler words and less slang.

7 Tools for Making an Infographic in an Afternoon Infographics are such a fun and effective visual way to display information. We at Buffer have certainly used them quite a few times to share information. I always enjoy looking at them, but always feel like there is no way I could ever create one myself. Or is there? Big Picture Challenge The PBS Big Picture Challenge App Can you guess the zoomed in image? Test your skills and download PBS Big Picture Challenge for FREE now. The Photos Behind Norman Rockwell's Iconic Paintings In his 50 year career with The Saturday Evening Post, Norman Rockwell’s cover paintings became some of the most iconic images of everyday life in America. Today, prints of the romanticized paintings of a simpler time are popular wall decor in diners and grandparents’ homes and commonly referenced in movies and TV shows. It would be nearly impossible to find an American adult who has not been exposed to at least one of these famous works, therefore it’s quite exciting to find out that the characters in each painting were, in fact, real people.