UC Davis School of Vet Med: Center for Companion Animal Health: Understanding Cancer in Golden Retrievers. I was greatly impressed with this article that appeared in a publication for Golden Retriever owners and breeders. 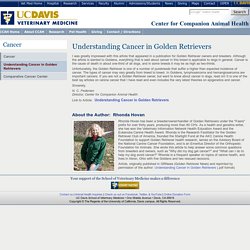 Although the article is slanted to Goldens, everything that is said about cancer in this breed is applicable to dogs in general. Cancer is the cause of death in about one-third of all dogs, and in some breeds it may be as high as two-thirds. Unfortunately, the Golden Retriever is one of a number of purebreeds that suffer a higher than expected incidence of cancer. The types of cancer may vary greatly from breed to breed. In Goldens, lymphosarcoma and hemangiosarcoma are important cancers. Sincerely, N. Link to Article: Understanding Cancer in Golden Retrievers About the Author: Rhonda Hovan Rhonda Hovan has been a breeder/owner/handler of Golden Retrievers under the "Faera" prefix for over thirty years, producing more than 60 CH's. The Anatomy of the Dog Soft Palate. I. Histological Evaluation of the Caudal Soft Palate in Mesaticephalic Breeds - Arrighi - 2011 - The Anatomical Record: Advances in Integrative Anatomy and Evolutionary Biology.

Abstract The gross anatomy and overall structure of the soft palate has been described in the average dog's head, however, no descriptive microanatomical studies of the dog soft palate are available, despite their possible utility in view of the manifold and important repercussions of this organ physiology. 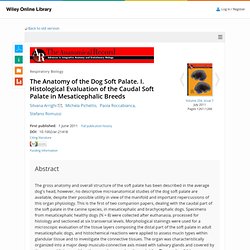 This is the first of two companion papers, dealing with the caudal part of the soft palate in the canine species, in mesaticephalic and brachycephalic dogs. Specimens from mesaticephalic healthy dogs (N = 8) were collected after euthanasia, processed for histology and sectioned at six transversal levels. Morphological stainings were used for a microscopic evaluation of the tissue layers composing the distal part of the soft palate in adult mesaticephalic dogs, and histochemical reactions were applied to assess mucin types within glandular tissue and to investigate the connective tissues. Enhanced Article Feedback Close the feedbackYou are previewing our new enhanced HTML article. Mr. The Anatomy of the Dog Soft Palate. II. Histological Evaluation of the Caudal Soft Palate in Brachycephalic Breeds With Grade I Brachycephalic Airway Obstructive Syndrome - Pichetto - 2011 - The Anatomical Record: Advances in Integrative Anatomy and Evolu.

Abstract In brachycephalic dogs, the skull bone shortening is not paralleled by a decreased development of soft tissues. 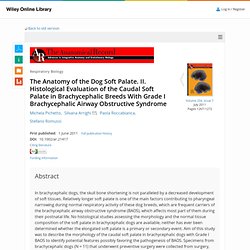 Relatively longer soft palate is one of the main factors contributing to pharyngeal narrowing during normal respiratory activity of these dog breeds, which are frequent carriers of the brachycephalic airway obstructive syndrome (BAOS), which affects most part of them during their postnatal life. 100 Years of Breed “Improvement”

For the sake of honest disclosure, I will admit to owning “purebreds” (the ‘pureness’ of purebreeds is a discussion for another time) but I also have mutts. 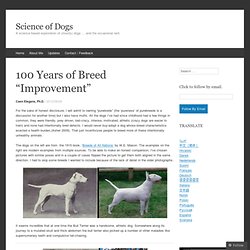 All the dogs I’ve had since childhood had a few things in common, they were friendly, prey driven, ball-crazy, intense, motivated, athletic (crazy dogs are easier to train) and none had intentionally bred defects. I would never buy/adopt a dog whose breed characteristics exacted a health burden. (Asher 2009). That just incentivizes people to breed more of these intentionally unhealthy animals. The dogs on the left are from the 1915 book, ‘Breeds of All Nations‘ by W.E. It seems incredible that at one time the Bull Terrier was a handsome, athletic dog. The Basset Hound has gotten lower, has suffered changes to its rear leg structure, has excessive skin, vertebra problems, droopy eyes prone to entropion and ectropion and excessively large ears. A shorter face means a host of problems. Once a noble working dog, the modern St. Like this: Canine Inherited Disorders Database.

Welcome to the homepage for the Canine Inherited Disorders Database (CIDD). a joint initiative of the Sir James Dunn Animal Welfare Centre at the Atlantic Veterinary College, University of Prince Edward Island, and the Canadian Veterinary Medical Association. 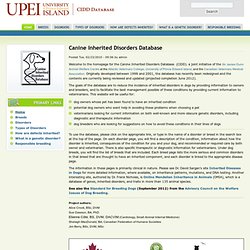 Originally developed between 1998 and 2001, the database has recently been redesigned and the contents are currently being reviewed and updated (projected completion June 2012). The goals of the database are to reduce the incidence of inherited disorders in dogs by providing information to owners and breeders, and to facilitate the best management possible of these conditions by providing current information to veterinarians. This website will be useful for: Canine narcolepsy. Dog brains in a spin. For the first time, scientists have shown that selective breeding of domestic dogs is not only dramatically changing the way animals look but is also driving major changes in the canine brain. 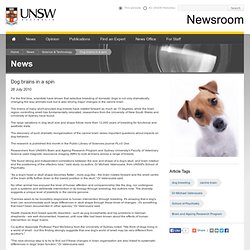 The brains of many short-snouted dog breeds have rotated forward as much as 15 degrees, while the brain region controlling smell has fundamentally relocated, researchers from the University of New South Wales and University of Sydney have found. The large variations in dog skull size and shape follow more than 12,000 years of breeding for functional and aesthetic traits. The discovery of such dramatic reorganisation of the canine brain raises important questions about impacts on dog behavior. The research is published this month in the Public Library of Sciences journal PLoS One. Researchers from UNSW's Brain and Ageing Research Program and Sydney University's Faculty of Veterinary Science used magnetic resonance imaging (MRI) to look at brains across a range of breeds.