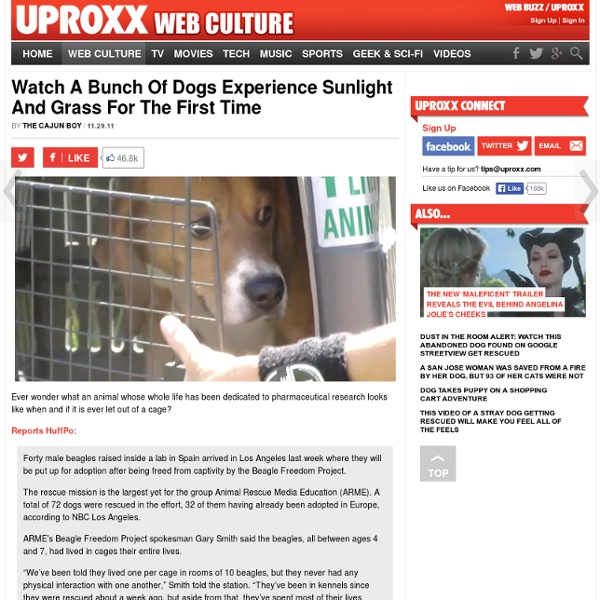 Ever wonder what an animal whose whole life has been dedicated to pharmaceutical research looks like when and if it is ever let out of a cage? Reports HuffPo: Forty male beagles raised inside a lab in Spain arrived in Los Angeles last week where they will be put up for adoption after being freed from captivity by the Beagle Freedom Project.The rescue mission is the largest yet for the group Animal Rescue Media Education (ARME). A total of 72 dogs were rescued in the effort, 32 of them having already been adopted in Europe, according to NBC Los Angeles.ARME’s Beagle Freedom Project spokesman Gary Smith said the beagles, all between ages 4 and 7, had lived in cages their entire lives.“We’ve been told they lived one per cage in rooms of 10 beagles, but they never had any physical interaction with one another,” Smith told the station. If you love dogs and can get past the cheesy music at the beginning, the video after the jump will absolutely melt your heart. (Jezebel via Anna Holmes)

Keira Rathbone - Typewriter Artist Soldier and dog’s reunion video a Web hit | The Upshot How do you say "welcome home" in dog? We're pretty sure this Great Dane Emmitt, nicknamed "Thunderpaws," got his super-excited message across. The overgrown pooch was reuniting with his dad, Trevor Chowder, who was returning from deployment in Afghanistan after spending nine months apart. The loving giant, who is normally not allowed to jump up (you'll see why when you watch the video — he's as tall as his human companion) stares into Trevor's eyes and gives him a hug while standing on his hind legs. [More Ultimate Surprises: Soldier Surprises Mom at Work] Trevor wasn't the only one who enjoyed this furry reunion. And that's really the point. [From Welcome Home Blog: Soldier Surprises Two Year Old Daughter at School] Website founder Chase Holfelder, who has received 500 videos of military reunions, and counting, says: "These videos are undoubtedly heartwarming no matter your political beliefs." Arts & EntertainmentMedia