Shrunk down an Arduino to the size of a finger-tip! by Open Source RF 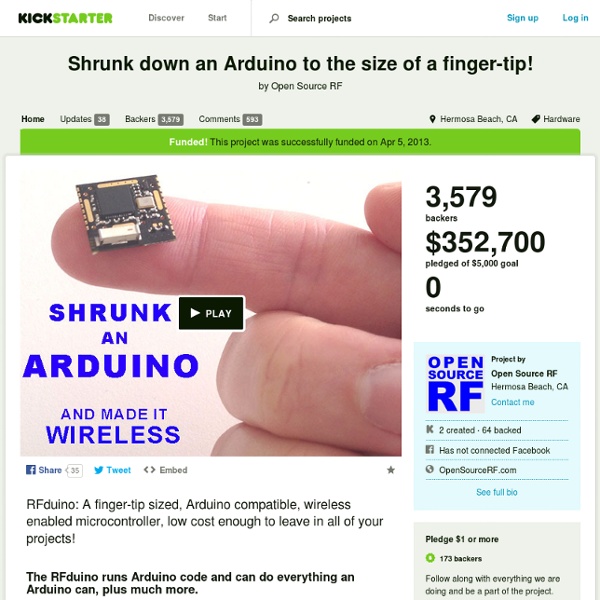 RFduino: A finger-tip sized, Arduino compatible, wireless enabled microcontroller, low cost enough to leave in all of your projects! The RFduino has Bluetooth 4.0 Low Energy built-in, which enables it to wirelessly talk to any smartphone that has Bluetooth 4.0. Currently we have several open source apps built for the iPhone which were used in our demos. Open source Android apps are next. The RFduino has a Nordic 32 bit ARM Cortex-M0 processor, so it has more power then the UNO, however it still runs the same, simple Arduino code the UNO runs, so there is no need to learn any new programming language or environment. Your standard Arduino sketches run on the RFduino. The RFduino GPIO lines all support, Digital IO, Analog ADC, SPI, I2C, UART and PWM. The RFduino is similar to the Arduino UNO or DUE, except the RFduino is a fraction of the cost and size, in addition has wireless smartphone connectivity built-in! The RFduino is a stand-alone board, just like the Arduino UNO. - Armen

ATtiny85 ISP! Shrink your Arduino projects with ease! by Ben Escobedo Shipping Details: Shipping is free to the USA (all 50 states) for all reward levels. For other countries, see description in the reward panel and add the appropriate amount. See project update #2 for full details! The ATtiny85 ISP!

Micro Python: Python for microcontrollers by Damien George The Micro Python project has been Kick-started! Thanks to all backers! You can find the project, including the software and hardware, at micropython.org. We have passed the initial funding goal of £15,000! We have passed the first stretch goal of £40,000! This means that Wi-Fi will be supported via a CC3000 module. Open Source Tracking Device by DSS Circuits My project is an Open Source tracking device based on the Arduino platform. A few years ago we had a bad ice storm here in Massachusetts and we lost power for several days. Well during the power outage my brother-in-law's house was robbed and one of the items stolen was my nephews' PS3. As is usually the case, none of the items were ever recovered. I talked to a couple of law enforcement personnel and found out that gaming consoles were one of the most common things stolen from homes. That's when I came up with the idea to build a tracking device and place it inside a gaming console.

XBoard V2 -A bridge between home and internet (Arduino Compatible) Hello, new here. Just bought a 3 wire LCD module an get this message compiling the example of the wiki page. I got the new libraries supporting Arduino IDE 1.0 + from another post, and tried with IDE 1.0.1 and 1.0.4 libraries from this post: Tessel Use your web development skills to make hardware devices with Tessel. Tessel is an open-source microcontroller that is programmable in JavaScript and compatible with Node.js. We founded Technical Machine to make hardware development as fast and flexible as developing for the web. Piksi : The RTK GPS Receiver by Swift Navigation Inc. We’ve had a lot of interest in the Piksi RTK system from professionals in the GIS and mapping fields, but our RTK Kit alone was not enough to fulfill this need. To use Piksi in these settings, you need a durable, integrated solution - one that can be turned on with the flick of a switch, and is accompanied by an easy, intuitive user interface. So, we have added a new reward, a ruggedized version of our RTK Kit containing two Piksi receivers each fully assembled with an enclosure, a Bluetooth module, an SD card slot, an integrated radio link, and 10 hours of rechargeable Lithium Polymer batteries. We’ll also be releasing data collection apps for Android and iOS that interface with Piksi over Bluetooth; you’ll be able to take measurements, plot points on your smartphone’s map, and for professionals, export to common formats to integrate into your standard mapping workflow - all with the 4 centimeter accuracy of the Piksi RTK system. Some possible applications: Piksi Technical Specs:

Weekly sounds: gel-based speakers, sound to control devices and Audio Branding Congress program New post on Weekly Sounds, with the best resources on the world of Sound and Audio. Our picks of the week Most interesting news of this week are in the field of research, where many sources reported on going experimentations related to the use of Sound in novel and never seen directions. First article is about Harvard University, where Researchers build an audio speaker out of stretchy transparent gel, a flexible speaker with ionic able to produce high-quality sound. Sound Gives Objects A Human Touch reports the work of two researchers from Japan’s University of Tsukub, consisting of an experiment to use the phenomenon of sound resonance of objects to control a mobile or desktop device. Watch the video below to know more.

Learning the Arduino Is an Adventure! Editor-in-Chief Matt Blum Managing Editor Senior Editor Jonathan Liu Publisher, Editor-at-Large Cheapduino (5Pcs) Introduction CheapDuino is the most affordable Arduino compatible processor in the world. The price for each cheapDuino is almost 1/5 price of the Arduino UNO.It's aimed to supply an extremely low cost solution for any disposable projects, such as DIY projects, workshop, gifts projects, E-Textiles and education.

Espruino: JavaScript for Things by Gordon Williams Want to write about Espruino? Check out this page Espruino is a small computer that anyone can use to control things around them. Its JavaScript interpreter gives you instant feedback so that you can experiment and develop whatever your level of experience. Even if you can’t program, you can still get started quickly with our Web-based graphical code editor! NavSpark: Arduino Compatible with GPS GNSS Receiver English, Simplified Chinese (简体中文), Traditional Chinese (繁體中文) For viewers in some region having problem seeing the above YouTube video, the contents is here: Powerpoint (简体中文), Youku Video (简体中文). NavSpark 点名时间上中文說明:

Touché: Touch and Gesture Sensing for the Real World. Disney Research, Pittsburgh. Touché is a new sensing technology that proposes a novel Swept Frequency Capacitive Sensing technique that can not only detect a touch event, but simultaneously recognize complex configurations of the human hands and body during touch interaction. This allows to significantly enhances touch interaction in a broad range of applications, from enhancing conventional touchscreens to designing interaction scenarios for unique use contexts and materials. For example, in our explorations we added complex touch and gesture sensitivity not only to computing devices and everyday objects, but also to the human body and liquids. Importantly, instrumenting objects and material with touch sensitivity is easy and straightforward: a single wire is sufficient to make objects and environments touch and gesture sensitive.