A dying man's last wish: To see his dog 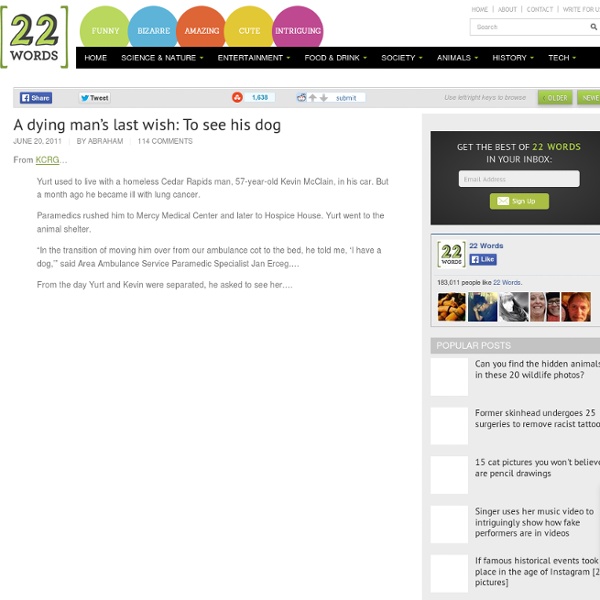 From KCRG… Yurt used to live with a homeless Cedar Rapids man, 57-year-old Kevin McClain, in his car. But a month ago he became ill with lung cancer.Paramedics rushed him to Mercy Medical Center and later to Hospice House. Yurt went to the animal shelter.“In the transition of moving him over from our ambulance cot to the bed, he told me, ‘I have a dog,’” said Area Ambulance Service Paramedic Specialist Jan Erceg.…From the day Yurt and Kevin were separated, he asked to see her (via Bag of Nothing)

Albino Animals Birdwatchers are rushing to Avebury, near Marlborough, Wiltshire to hopefully catch a glimpse of a rare albino jackdaw. Author Andrew Collins was the first to photograph the bird which locals have named Jackie. Other fabulous albino animals include: According to Wikipedia there is no reported case of a true “albino” horse even though white horses have been referred to as albino in literature and some registries. All so-called “albino” horses have pigmented eyes, usually brown or blue, and thus are not true albinos. Dominant white in horses is caused by the absence of pigment cells melanocytes, whereas albino animals have a normal distribution of melanocytes In other animals, patches of unpigmented skin, hair, or eyes due to the lack of pigment cells (melanocytes) are called piebaldism, not albinism nor partial albinism. Despite this, some registries still refer to “albino” horses.

The OSTRICH Story A man walks into a restaurant with a full-grown ostrich behind him. The waitress asks them for their orders. The man says, "A hamburger, fries and a coke," and turns to the ostrich, "What's yours?" "I'll have the same," says the ostrich. The next day, the man and the ostrich come again and the man says, "A hamburger, fries and a coke." The ostrich says, "I'll have the same." Again the man reaches into his pocket and pays with exact change. This becomes routine until the two enter again. "The usual asks the waitress?" "No, this is Friday night, so I will have a steak, baked potato and a salad," says the man. "Same," says the ostrich. Shortly the waitress brings the order and says, "That will be $32.62." Once again the man pulls the exact change out of his pocket and places it on the table. The waitress cannot hold back her curiosity any longer. "Excuse me, sir. How do you manage to always come up with the exact change in your pocket every time?" found an old lamp. me two wishes. would always be there."

Last Suppers: James Reynolds Photographs of Death Row Inmates Final Meals -... Launch Slideshow The death penalty was reinstated 34 years ago this week. To mark the date, we look at a photo series of last meal requests from death row inmates. James Reynolds is a London photographer who documented the final requests of former death row inmates after seeing a small list in Schott's Food and Drink Miscellany. This week marks the 34th anniversary of the reinstatement of the federal death penalty. GOOD: What were you trying to convey about these last requests? JAMES REYNOLDS: I saw a small list of what a few death row prisoners had chosen for their last meals before their deaths and I wondered what they would look like as a visual image. G: Are there any particular meals that spoke to you? JR: I tried to research why each prisoner chose what they did, but only discovered why the single olive was chosen. G: So when you were done photographing these, did you eat the meals? G: Do you have any strong feeling about the death penalty? JR: This is a very difficult question.

A dog’s seeing eye dog Lily is a Great Dane that has been blind since a bizarre medical condition required that she have both eyes removed. For the last 5 years, Maddison, another Great Dane, has been her sight. The two are, of course, inseparable. (via Weird Universe, Daily Record, The Sun) Wild China: 25 Spectacular Species You Should See | Green Buzz China is certainly one of the most beautiful places on earth. Entwined with temples of culture, mountains painted in white snow, lands of the giant panda, coastlines enriched with amazing colonies of unusual birds, dense forests that are roped with hunting tigers and a great wall that stretches through the land and ripples with history. These are only a small handful of the treasures that embellish Chinese lands. But which species thrive here? Here is a selection of 25 species that are sure to be admired as flagship species of China. 1. Image Source – Swan-t The Giant Panda (Ailuropoda melanoleuca, meaning “black and white cat-foot”) is inevitably China’s most adored species. 2. Image Source – Guwashi999 This beautiful golden faced Canid is also known was the Asian Wild Dog. 3. Image Source – Steve Living amongst marshes, ponds, rivers and streams is the strong Chinese alligator, which spends its winters hibernating in burrows. 4. Image Source: jpben 5. Image Source: Reurinkjan 6. 7. 8. 9.

Deadly Leopard Seal Tries to Feed Live Penguins to Photographer (Video) "Bloody Hell! That's the biggest leopard seal I've ever seen!" Leopard seals are pretty scary predators, especially if you're a penguin. The Seal Saw Him as a Useless Predator Here's is a video of Nicklen explaining what happened, with many incredible photos. For more photos by Paul Nicklen, check out his website. See also: Beijing Zoo Puts their Animals on the Menu