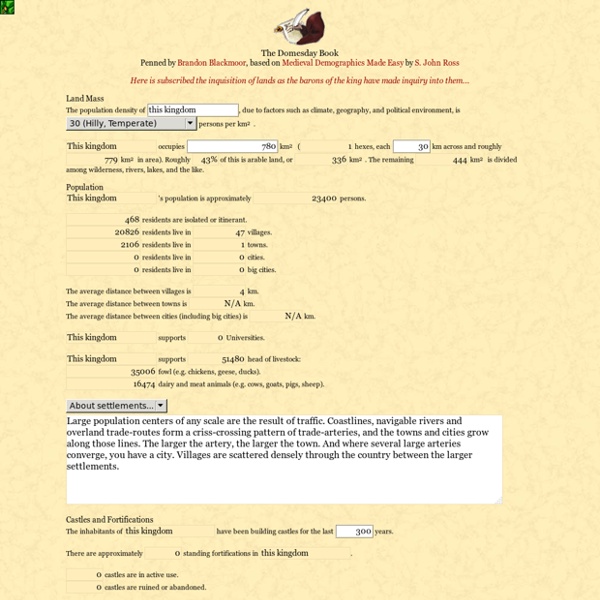 The Domesday Book Penned by Brandon Blackmoor, based on Medieval Demographics Made Easy by S. John Ross Here is subscribed the inquisition of lands as the barons of the king have made inquiry into them... <p>Forsooth, thy browser is truly antiquated! Thou canst not access this web site with a browser such as thine. Land Mass The population density of , due to factors such as climate, geography, and political environment, is persons per km2 . occupies km2 ( hexes, each km across and roughly km2 in area). Population 's population is approximately persons. residents are isolated or itinerant. residents live in villages. residents live in towns. residents live in cities. residents live in big cities. The average distance between villages is km. supports Universities. supports head of livestock: fowl (e.g. chickens, geese, ducks). dairy and meat animals (e.g. cows, goats, pigs, sheep). Large population centers of any scale are the result of traffic. Castles and Fortifications Towns and Cities

Fantasy Name Generator By Samuel Stoddard - Version 1.5 One of the perks of creating fantasy stories -- whether by writing a story or game or by role-playing -- is you get to make up the names. Some people relish the task while others are frustrated by it. Some like it but can't seem to create names that are diverse enough. Fantasy Name Generator is a tool that can help you. It can generate an endless number of random names (of people, places, or anything) that would be suitable for use in a fantasy setting. Yafnag - Fantasy Name Generator This random name generator provides lists of fantasy names, useful in role-playing games, for World of Warcraft, or in any situation where many names of characters or places are needed. Some links: SOAP server: Yafnag can be used through a SOAP web service (SOAP server). See the WSDL description and a example of small python SOAP client. XML-RPC server: more easy than SOAP, Yafnag can also be used through a XML-RPC web service (XML-RPC server). Look at the example of the minimal python XML-RPC client for more information.

First Crop of 4e Tools I wrote my monthly column for Johnn Four’s Roleplaying Tips newsletter last night. It was a 1500 word article on teaching a RPG to new players, I’ll repost it here as soon as Johnn puts it on his site. That also means that I have no meaty article for here this morning… time for some linkys! Life In The 17th Century During the 17th century the population of England and Wales grew steadily. It was about 4 million in 1600 and it grew to about 5 1/2 million by 1700. During the 17th century England became steadily richer. Trade and commerce grew and grew. By the late 17th century trade was an increasingly important part of the English economy. Meanwhile industries such as glass, brick making, iron and coal mining expanded rapidly.

Random City Map Generator The Random City Map Generator creates a "random" city or town map suitable for fantasy and other role-playing games (RPGs) such as Dungeons and Dragons, Pathfinder, GURPS, HERO and many others. Note: you can try out version two of this tool. Because the map is made from layered images, to save or print a map you need to either: Take a sceenshot (print screen key) and paste into an image editor; Or print the page to a pdf file (Macs have this built-in, PCs may need a product like "cutePDF".) See more caveats and planned features below. Planned Features/Caveats Yes, the streets are too ordered for most cities... a couple of completely different street layouts will be added and they will be more random/meandering.

GIMP - hexGIMP hexGIMP This script creates a set of layers and an image grid suitable for making TSR-style wilderness hex maps. The brushes included in the distribution were derived from hex art copyright Thorfinn Tait, used with permission (see his site at thorf.co.uk ). Rpg Campaign Manager New Reviews PowerPoint Presentation is a software which can be used to search number of power point presentations where as it can also be used to replace the power point presentations. The PowerPoint Pipe can also be performed to change various types of UNC ... Bitcoment is a very popular tool in applications of file sharing. Apart from this feature this enhances downloading speed of the system in regular manner. There is no harm in downloading this tool but one should get a prefect shareware of freeware ...

A Medieval Mystery This lesson is suitable for KS3 History Unit 19: 'How and why did the Holocaust happen?' and could also be used to support Citizenship at KS3 Unit 4: 'Britain - a diverse society?'. The cartoon depicts the profoundly negative way in which Jews were viewed in 13th century England. Their situation did not improve. TheForge : fantasy name generator Welcome to TheForge, a collection of Fantasy name and word generators, designed to spark the imagination and kindle the creative process. TheForge is a robust network of databases and sophisticated action-scripting. Nonetheless, using TheForge is a simple and intuitive process, thanks in no small part to the utility's streamlined interface. This fusion of simplicity and power is what has garnered TheForge its acclaim and popularity as one of the foremost name generators on the internet. Unlike most name generators, TheForge does not issue "assembly line" creations. Many times, users are faced with an overwhelming flood of quantity over quality.