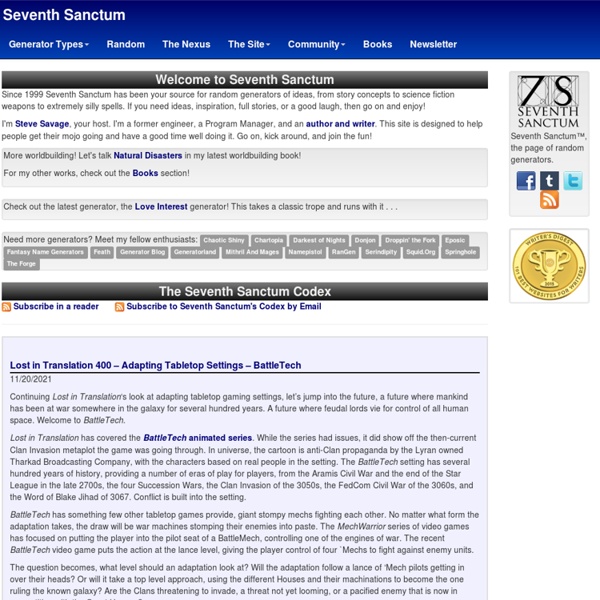 [Way With Worlds appears at Seventh Sanctum, MuseHack, and Ongoing Worlds] So you’re world building, but the world is basically like ours, or like a given historical place and time. You’d start building religions, but . . . you’re dealing with real religions that people practice and live right now (or the ancestors or descendants of those religions). You’re not so much creating them, but asking where they fit into your setting, what’s “real” and what you have to write. There’s more “about” than “building.” Sounds easy, right?

Corel Painter User Resources Resources for users of Corel Painter, the image editing and natural media painting tool. Includes resources for earlier versions including Fractal Design Painter, MetaCreations Painter, and procreate Painter. New Features in Corel Painter X3Explore the best new features in Corel Painter X3 in this screen shot tour. The Clone Source Panel - Creative Color in PainterThe Clone Source Panel in Painter can open up new and exciting ways to render your photographs and with a little imagination you can create beautiful paintings that have your personal touch. Writing Challenge Generator Challenges The story must involve a crown in it. During the story, a character finds out a dark secret. During the story, there is a fight. A character reveals their feelings. StarGen - Solar System Generator Introduction StarGen is the latest version of a series of programs I've worked on off and on over the last thirty years, though none of my code in the current incarnation is more than half that age. It's a program for creating moderately believable planetary systems around stars other than our own. The most recent version runs on Macintosh and Unix machines and produces HTML files as output. The image above is a thumbnail of the sort of thing it produces. Click on it for a page of examples.

Unique, Uncommon, Unusual Baby Names for Boys and Girls, (Male, Female, Meanings) Eleven French Films for People Who Hate French Films A wise man once said, “French films are… too French.” American audiences often have preconceived notions about foreign films… that they’re boring, nonsensical, and hoity-toity(a technical term, you can google it), but French films in particular may come across as more pretentious than a lifetime subscription to McSweeney’s Quarterly Concern. So how do we at Film School Rejects combat this misguided attitude?

Fantasy Name Generator By Samuel Stoddard - Version 1.5 One of the perks of creating fantasy stories -- whether by writing a story or game or by role-playing -- is you get to make up the names. Some people relish the task while others are frustrated by it. Some like it but can't seem to create names that are diverse enough. The Top 10 Web Design Skills You WILL Need! Here are my top 10 web design skills that you WILL need to master to become an effective web designer. If you’re serious about mastering web design and marketing, check out the Pro Web Design Alliance. See how Jordan benefited from the course forum and Google hangout sessions to make his and his clients’ sites better.