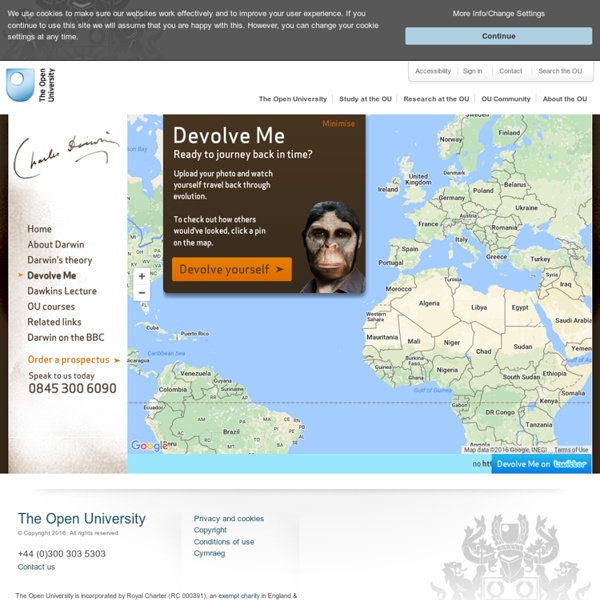 To view our site properly you'll need Flash Player 9 or above and Javascript enabled in your browser. Ready to journey back in time? Use our fun tool to see yourself as you would have looked as an early human. When you've finished, why not share the results with a friend? Upload your photo and see yourself travel back through the evolutionary timeline... it's not an exact science but it is a lot of fun! If you upload your photo in the Devolve Me tool or send the results to a friend, The Open University will not use these photos or email addresses for any other purpose. Australopithecus afarensis The most famous example of afarensis was the skeleton of 'Lucy' discovered in 1974 at Hadar in Ethiopia. Homo habilis Meaning 'handyman', Homo habilis was probably the first of our ancestors to use stone tools and thrived 2.2 - 1.6 million years ago. Homo erectus Homo heidelbergensis The heyday of this stout, thick-boned species was probably around 400,000 to 500,000 years ago. Homo sapien

Dumpr - Photo Fun A Science Odyssey: You Try It: Human Evolution When did humans evolve? Who are our ancestors? Why did we evolve? At the turn of the century, scientists could only dream about finding the answers to these questions. The fossilized remains of a species known as Neanderthal had been found, and there was a primitive, human-like skull that had been discovered in Indonesia. Beyond that, there was little hard evidence to work with. With the 1912 "discovery" of the Piltdown Man, the study of human evolution was sent down a wrong track. There have been many discoveries, and much has been learned about the human odyssey over the past few decades. This activity shows the major hominid (human or human-like) species discovered to date, when they lived, and how they might be related to each other. More... Related People and Discoveries entries A Disclaimer