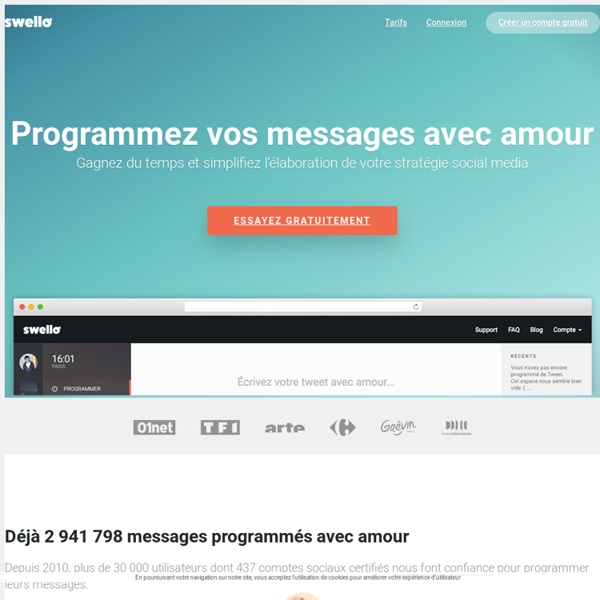 Search Twitter users by Location and Bio and Create Twitter Lists: LocaFollow Search and filter options allowing you to find people to follow depending on location, influence, number of followers, how active users are on Twitter and many more! Find the most beneficial people to target so that you can grow and increase the quality of your Twitter community. Find out your best time to tweet, discover the interests of a custom sample of users and endless extra features! To find out more about our product Exploring the Twitterverse Brian Solis inShare216 Happy New Year! Twitter officially launched to the public in July 2006. Raccourcir un lien Posted by Michael Hermanto, Software Engineer, Firebase We launched the Google URL Shortener back in 2009 as a way to help people more easily share links and measure traffic online. Since then, many popular URL shortening services have emerged and the ways people find content on the Internet have also changed dramatically, from primarily desktop webpages to apps, mobile devices, home assistants, and more. To refocus our efforts, we're turning down support for goo.gl over the coming weeks and replacing it with Firebase Dynamic Links (FDL).

The Most Complete Twitter Application List Available - 2011 Edition I believe this is the best, most complete and accurate list of valuable Twitter applications available on the internet right now. To be fair, I absolutely have merged and plagiarized other older and outdated lists that I found (the larger ones are credited below). However, I spent a good deal of time to clean out the dead applications, delete the apps that were overly quirky or being developed, focus more on the apps that increase productivity, and add in many of the new great apps that have come out over the past six months - particularly in the productivity / business apps section where my primary interest lies. I have also tagged the tools that cost money / have a premium option ($) as well as if they have a valuable free option (F/$). Finally, while application selection can be a personal thing, I tagged my favorite app (*) in each category. Simple Web Based Clients and Twitter Viewing Tools

How To Backup Your Twitter Archive With the Twitter fail whale popping up all the time, you never know when something tragic might happen. No one want to lose all of their Twitter tweets, followers, or anything else for that matter. That’s why it’s a good idea to backup your Twitter archive on a regular basis in case of a Twitter mishap. Custom Design Random qr code with transparent background QR code generator Custom QR code link to Twitter Comments here (tumblr post) : "QR code to Twitter" Color : | | 10 Top Twitter Tools Suggested By the Pros Yes, there are a ton of great Twitter Tools out there for you, but which ones should you pick? I thought one of the best ways to narrow your choice down is to get in touch with the real Social Media experts. I sent them an email and asked them about their recommended Tools for you. So here are the top 10 responses from the Twitter Pros out there. I hope some of these tools will be useful for you too: