BBC Languages – Free online lessons to learn and study with 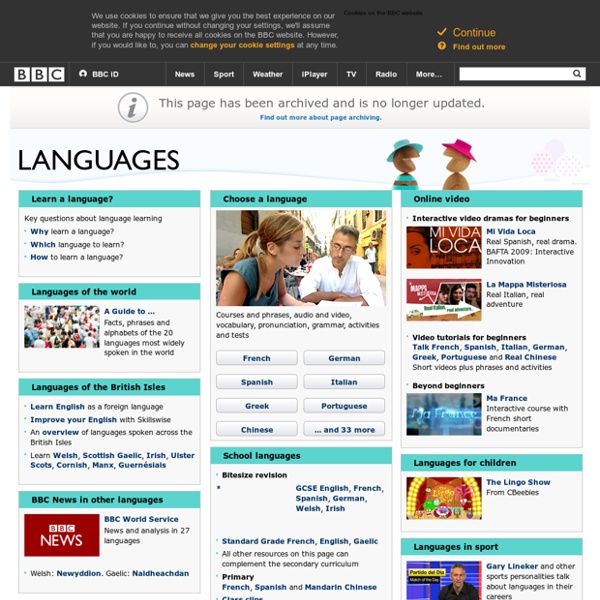 @import '/staticarchive/fa81fb450d419556b29722ee8270c43da933db19.css'; @import '/staticarchive/7ce099eb1cacc32af59884022002b9f87b5f62c5.css'; Cookies on the BBC website We use cookies to ensure that we give you the best experience on our website. We also use cookies to ensure we show you advertising that is relevant to you. If you continue without changing your settings, we'll assume that you are happy to receive all cookies on the BBC website. However, if you would like to, you can change your cookie settings at any time. British Broadcasting Corporation Home Accessibility links This page has been archived and is no longer updated. Learn a language? Key questions about language learning Why learn a language? Which language to learn? How to learn a language? Languages of the world A Guide to ... Facts, phrases and alphabets of the 20 languages most widely spoken in the world Languages of the British Isles Learn English as a foreign language Improve your English with Skillswise BBC World Service BBC iD

25 BEST WEBSITES FOR LEARNING ENGLISH I want the new e-book! How do you learn English in your free time? Do you meet internationals in cafés, do you self-study using books, do you get on the internet? Punctuation, symbols & operators in search - Search Help You can use symbols or words in your search to make your search results more precise. Google Search usually ignores punctuation that isn’t part of a search operator. Don’t put spaces between the symbol or word and your search term. A search for site:nytimes.com will work, but site: nytimes.com won’t. Christmas 2020 by Pavlina Navratilova on Genially Christmas essentials Made by Angličtina v žabkách. Thank you Freepik for the lovely design! Stockings

Art Deco Hotel Montana, Luzern For lovers of Design & Lifestyle The exceptional Penthouse Spa Suites, opened up in June 2010, leave nothing to be desired – from a generous in-room spa area and illuminated sensory showers to a roof-top panorama whirlpool. Montana Hotel is legendary for the wide variety of events it offers, for example gourmet cooking classes or jam sessions in the Louis Bar. For lovers of Typically Swiss Hotels Lucerne, Swiss city par excellence and as impressive as it is sublime, nestles on the shores of Lake Lucerne, surrounded by a magnificent mountain panorama.

Visual Dictionary, Visual Thesaurus Visuwords™ online graphical dictionary — Look up words to find their meanings and associations with other words and concepts. Produce diagrams reminiscent of a neural net. Learn how words associate. Enter words into the search box to look them up or double-click a node to expand the tree. 67-open-source-replacements-for-really-expensive-applications-3 38.Inkscape Replaces Illustrator ($599), CorelDraw($399) Another tool for graphics professionals, Inkscape is a vector graphics drawing program with many advanced features. The Inkscape website also includes links to a library of open source clip art that you can use freely in your illustrations. Operating System: Windows, Linux, OS X 39.

Resources The resources bellow have been inspired by many great teachers and professionals that have been very generous with their ideas and that I have encountered on social media sites. I have credited everyone who has inspired me to create or adapt my own resources in descriptions and shared only where I was permitted to do so. If you like my work you can buy me a coffee 😊 Groceries - Aisle 1 Dear German food lover, We like to say, "It's not just about the German food; it's about the memories!" It's also about adding new features like being able to store your payment information, store multiple address for friends and family, and much more. We do value you as our returning customer, but we have had some exciting changes since you last placed your order with us. Instead of logging in as a returning customer please follow our simple instructions so we can link your past information with your current order profile:

happy English is a West Germanic language that was first spoken in early medieval England and is now a global lingua franca. Named after the Angles, one of the Germanic tribes that migrated to the area of Britain that would later take their name, England, both names ultimately deriving from the Anglia peninsula in the Baltic Sea. It is closely related to the Frisian languages, but its vocabulary has been significantly influenced by other Germanic languages, particularly Norse (a North Germanic language), as well as by Latin and French.[6] English has developed over the course of more than 1,400 years.