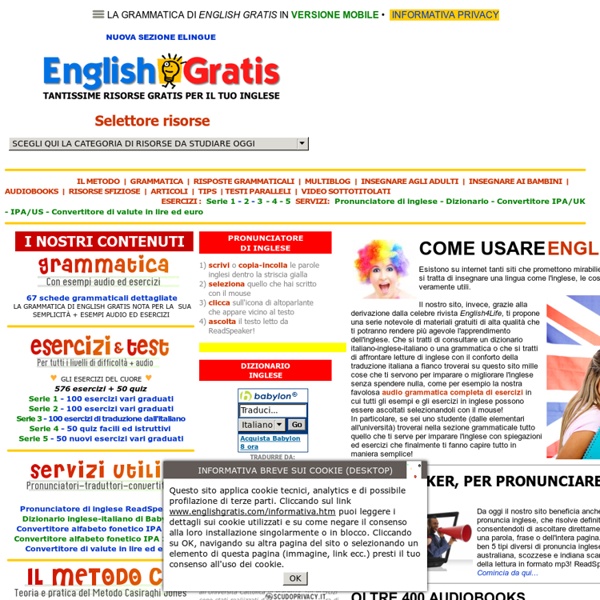 CLASSICI IN INGLESE IN FORMATO AUDIOBOOK CON TRADUZIONE INTERATTIVA The Wonderful Wizard of Oz. by L. Frank Baum. 1. The Cyclone. Dorothy lived in the midst of the great Kansas prairies, with Uncle Henry, who was a farmer, and Aunt Em, who was the farmer's wife. When Dorothy stood in the doorway and looked around, she could see nothing but the great gray prairie on every side. When Aunt Em came there to live she was a young, pretty wife. Uncle Henry never laughed. It was Toto that made Dorothy laugh, and saved her from growing as gray as her other surroundings. Today, however, they were not playing. From the far north they heard a low wail of the wind, and Uncle Henry and Dorothy could see where the long grass bowed in waves before the coming storm. Suddenly Uncle Henry stood up. "There's a cyclone coming, Em," he called to his wife. Aunt Em dropped her work and came to the door. "Quick, Dorothy!" Toto jumped out of Dorothy's arms and hid under the bed, and the girl started to get him. Then a strange thing happened. Toto did not like it. 2. "Oh, dear! 3.

English Club Italian - Open University Course L1 On this page This key introductory Level 1 course – Andante: beginners' Italian – is designed to give you the skills you need to speak and understand simple Italian in everyday contexts. The course takes you through a wide range of practical situations such as travelling, shopping, working and eating out in Italy. Study resources include printed books and a dedicated website with online activities, resources and audio recordings to support your independent learning. Together, they’ll give you not just language skills but a real feel for Italian society and culture too. What you will study The course is based around three books and has at its core the following elements: The study materials are carefully structured and graded, and provide ample opportunities to practise the language in realistic contexts, with an emphasis on listening and speaking skills. Andante is an ideal preparation for Vivace: intermediate Italian (L150). Entry This is a key introductory Level 1 course. Regulations

Manifesto del Partito Comunista - Prima parte A spectre is haunting Europe — the spectre of communism. All the powers of old Europe have entered into a holy alliance to exorcise this spectre: Pope and Tsar, Metternich and Guizot, French Radicals and German police-spies. Where is the party in opposition that has not been decried as communistic by its opponents in power? Where is the opposition that has not hurled back the branding reproach of communism, against the more advanced opposition parties, as well as against its reactionary adversaries? Two things result from this fact: I. II. To this end, Communists of various nationalities have assembled in London and sketched the following manifesto, to be published in the English, French, German, Italian, Flemish and Danish languages. The history of all hitherto existing society is the history of class struggles. In the earlier epochs of history, we find almost everywhere a complicated arrangement of society into various orders, a manifold gradation of social rank. they became so many fetters.

English Grammar, Conditional Sentences: four conditionals explained play an important role in grammar. They describe a condition and the result that follows. On this page, I will shed some light on the subject. Conditional sentences are made up of two parts: the if-clause (condition) and the main clause (result that follows). Basically, there are conditionals: Apart from them, you can also form mixed conditionals. But how do we form those variations? The easiest way is to understand that both clauses (the if-clause and the main clause) can be real or unreal and refer to present (future) or past. Real conditional describes real-life, possible situations. Unreal conditional describes imaginary situations. We'll deal with each clause separately. If-clause First of all, you must decide if the situation in the if-clause is real or unreal. Examples of real if-clauses: I have some money, I go to a club. Examples of unreal if-clauses. If I could fly, I... Once you've decided about that, it's time to choose the correct tense. Examples of present if-clauses: Main-clause 1.

Guide to Learning Languages, part 1 (Learning Techniques, Methods &amp; Strategies) Language Learning Forum Why focus on writing: The following is quoted almost verbatim from my profile thread and dates back to 14 November 2008: There are roughly two kinds of language learners: those that primarily learn through their ears and those who learn through their eyes. My first objective isn't to learn to speak a certain language, but to be able to read it and think it, and after that to be able to write it. To be able to read and even more to think in a language you must of course study the pronunciation first. In the beginning you normally can't understand anything, but you may be able to distinguish certain words and use the pronunciation of these to catch the 'sound' of the language. As a result of this toil and labour I expect some day to wake up and suddenly be able to understand the target language in its spoken form (a so called epiphany moment - see below). When you can understand genuine spoken stuff you finally have the ideal chance to focus on your pronunciation.

Europa Vicina - Rivista poliglotta d'informazione e cultura An Easy Way to Learn Foreign Languages: Part One | Women Learning Thai... and some men too ;-) Introducing Luca and his language learning method… Luca Lampariello is an Italian polyglot who speaks 9 languages: Italian, English, French, German, Spanish, Dutch, Swedish, Russian, and Portuguese. Chinese is his latest language project, and learning to speak Thai is a real possibility! When Luca was barely in his teens (13), he began studying languages on his own. Using these basic principles in his self-study, over the years a simple language learning method evolved. Full circle: Target language (source files) => Native language => Target language This method enabled him to acquire languages with ease. To talk with other language learners, Luca joined YouTube. And YouTube is where I found both Luca and his method. Excited about the possibilities, I contacted Luca to get the finer details on how his method would mesh with learning Thai. And that is what you will find in the coming information. I now hand you over to Luca… An easy way to learn foreign languages… My language learning method…

DVD vs. CD: How Are They Different? Hi, I'm Zoya Popova for About.com, and today we're going to talk about the differences between CD and DVD. Similarities of CDs and DVDs On the face of it, CDs and DVDs look very much alike. Both have a standard 12 cm diameter, and both are about 1.2 mm thick. What's even more important is that they are both optical discs, which means that the data stored on them is read by a laser. The laser goes over the pits and lands embedded onto the disc surface, and communicates a signal to the reading device that turns it into a digital code of 1s and 0s. Structural Difference of DVDs and CDs There are, however, significant differences. In a single-sided DVD, data is embedded into only one half of the disc, the other half being a dummy. DVDs Holds More Information The major difference between CDs and DVDs is the size of the pits and lands that encode data. DVDs Have Faster Rotation Speeds Another major difference is disc rotation speed.