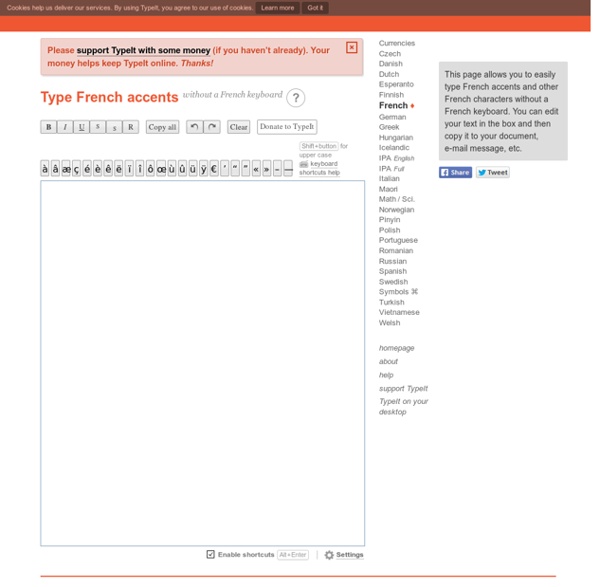 This page allows you to easily type French accents and other French characters without a French keyboard. You can edit your text in the box and then copy it to your document, e-mail message, etc. Press Ctrl with the appropriate letter. For example, to type é, è, ê or ë, hold Ctrl and press E one, two, three or four times. Stop the mouse over each button to learn its keyboard shortcut. You can select text and press Ctrl + C to copy it to your docu­ment.

How to Create Mail Merge in Gmail using Google Docs Learn how to create Mail Merge with Gmail and send personalized email messages in bulk. You may also add file attachments to the mass emails. Mail Merge for Gmail lets you send personalized email messages to multiple contacts in one go. The individual messages have almost the same content but some parts of the message can be customized. For instance, you can greet each recipient by their first name, you can include their postal address in the message body, personalize the subject line, attach different files while the other parts of the email body remain the same.

Learn Spanish with free online lessons How to write a letter or e-mail in French: closing formulae Following on in our look at how to write a letter in French, here is some vocabulary useful in writing a business letter or e-mail. Suggest a change / proposez une modification See also See the section on letter closures for more information on formal and informal ways of signing off a letter in French. You may also be interested in: types of business in French

Timeline for Facebook Pages: THE COMPLETE GUIDE Whether you like it or not, the Timeline format is coming to Facebook Pages, and you have until March 30th to figure it out. If you’re lost and you don’t know what Timeline is or how it works, don’t worry – I’m here to break it down and make it easy for you to understand. Why does any of this matter? Because Facebook is still huge for online business, blogging and driving a ton of traffic. Oxford Language Dictionaries Online False friends (faux amis) English belongs to the Germanic family of Indo-European languages, as can readily be seen from everyday words such as make, can, go, man, wife, son, daughter, sister, brother, house, garden, door—to name but a handful. French, on the other hand belongs to the Romance family which has its roots in the vulgar Latin of the Roman conquest of Europe and the Middle East.

An/Année, Jour/Journée, Matin/Matinée, Soir/Soirée The French word pairs an/année, jour/journée, matin/matinée, and soir/soirée can be confusing to students because each pair has a single English translation. The important thing to understand is that the difference between the words in each pair has to do with two different ways of considering time. The short words an, jour, matin, and soir (note that they are all masculine) indicate a simple amount of time or division of time. Common Mistakes At Writing in French by English Speakers Reading time: 15-20 minutes Difficulty: Intermediate Level Are you making some silly mistakes at writing in French? Then you should definitely check out this article! After the awesome reaction from the first blog post (you can check it out here) and you still want to improve your writing in French, take a look of these 3 NEW examples below. I asked some French learners via my newsletter and facebook to write an essay and I just corrected it. You will find the original version, the corrected version AND I record it so you can practice your listening and pronunciation as well (I will do later in the coming week).

20 Must Know French Texting Abbreviations for Facebook & phone -infographic Let’s face it, texting or using text message abbreviations like LOL or ROLF to communicate is no longer restricted to totally cool hipster adults or tweens anymore. Even in France. If you live in France or have French friends you want to stay in touch with via Facebook, email or text messaging, try learning a few internet text message abbreviations. Here are 20 common ones to get you started. Why should you learn some French texting slang abbreviations? Even if you never plan on texting in French or insist on using whole words rather than abbreviated words to communicate, like my husband, it doesn’t mean other people will do the same. Improve your French with popular French songs with translations and vocabulary exercises. Comme des enfants – Coeur de pirate. French lyrics and English translation. January 4, 2010 Coeur de pirate released her debut album recently. She is a young woman from Québec and I am a big fan of her first album.

French Linguistics Articles and Books Article Indexes MLA Bibliography via Online Journals & Databases *Available only to UIUC Affiliates. French Language Audio Think French Audio is the key to your success mastering the French language! Think French Audio provides hours of listening, pronunciation and speaking practice. Each month the articles in Think French are read by native French speakers. The new content you receive every month provides you with hours of enjoyable listening and speaking practice. Listen to Think French while reading your magazine or copy the files to your Ipod or CD and enjoy on your commute to work. Think French Audio will immediately begin to improve your listening comprehension, enhance your pronunciation and increase your confidence speaking aloud. Appendix:French idioms - Wiktionary Definition from Wiktionary, the free dictionary List of idioms in the French language: A[edit] B[edit] C[edit] D[edit]

9 French Words We Should Be Using in English When learning a foreign language, new words stick with you for different reasons. Some words express a cultural concept, an idea intrinsically bound with the language and culture that you are learning. Other words express a concept or idea that is familiar, but for which there is no equivalent word or expression in your own language. These are the “of course!” words, the “why don’t we have a word for that?”