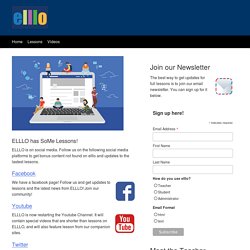 ELLLO is on social media. Follow us on the following social media platforms to get bonus content not found on elllo and updates to the lastest lessons. Facebook We have a facebook page! Follow us and get updates to lessons and the latest news from ELLLO! Youtube ELLLO is now restarting the Youtube Channel. Twitter ELLLO has a Twitter page. Podcast | iTunes and Stitcher Did you know ELLLO has a podcast? Pinterest This site is made especially for teachers. TalkEnglish.com - Learn English with Free Business English Lessons. 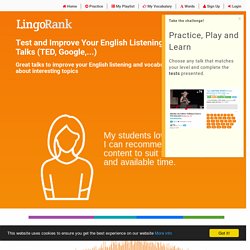 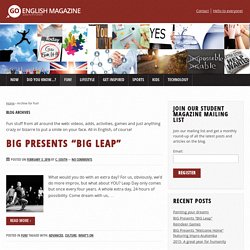 All in English, of course! What would you do with an extra day? For us, obviously, we’d do more improv, but what about YOU? Leap Day only comes but once every four years. A whole extra day, 24 hours of possibility. Posted in Fun! Barcelona holds something magical for all of us. Air conditioning systems are on full blast, mosquitos are getting fatter and our kids are rejoicing in the fact that school is (almost) out for the summer.

If women think all the decent guys in their thirties are married, then finding decent men in their fifties and sixties is like looking for a needle in a haystack. Vocabulary Games, English Vocabulary Word Games. Wordnik. How do you pronounce the word hot? Visual Dictionary Online. Free Visual Dictionary & Thesaurus. Shahi - A visual dictionary. Happy. English is a West Germanic language that was first spoken in early medieval England and is now a global lingua franca. 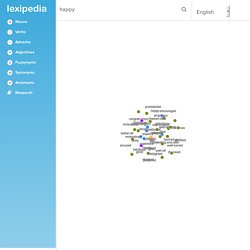 Named after the Angles, one of the Germanic tribes that migrated to the area of Britain that would later take their name, England, both names ultimately deriving from the Anglia peninsula in the Baltic Sea. It is closely related to the Frisian languages, but its vocabulary has been significantly influenced by other Germanic languages, particularly Norse (a North Germanic language), as well as by Latin and French.[6] English has developed over the course of more than 1,400 years. The earliest forms of English, a set of Anglo-Frisian dialects brought to Great Britain by Anglo-Saxon settlers in the 5th century, are called Old English. Middle English began in the late 11th century with the Norman conquest of England and was a period in which the language was influenced by French. 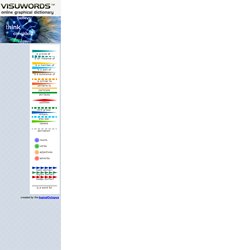 Produce diagrams reminiscent of a neural net. Learn how words associate. Enter words into the search box to look them up or double-click a node to expand the tree. Click and drag the background to pan around and use the mouse wheel to zoom. Hover over nodes to see the definition and click and drag individual nodes to move them around to help clarify connections. It's a dictionary! Visuwords™ uses Princeton University’s WordNet, an opensource database built by University students and language researchers. The Visuwords™ Interface To use the applet you only need to type a word into the search query at the top of the page and press 'Enter'. You can zoom the model in and out by rolling the wheel on your mouse. ePals. 25 BEST WEBSITES FOR LEARNING ENGLISH.

I want the new e-book! 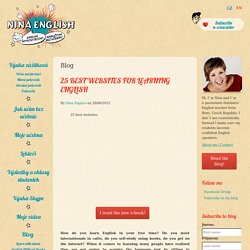 How do you learn English in your free time? Do you meet internationals in cafés, do you self-study using books, do you get on the internet? When it comes to learning many people have realized they are not going to acquire the language just by sitting in classrooms. Interesting Things for ESL/EFL Students (Fun English Study) RealLife English.