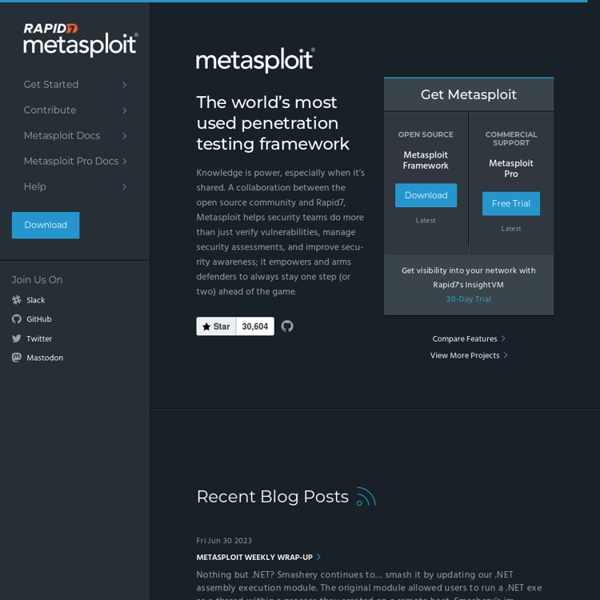 Free Steganography Software - QuickStego Free Steganography Software - QuickStego What is Steganography? Steganography is the science of writing hidden messages in such a way that no one apart from the sender and intended recipient even realizes there is a hidden message. News of the World 'hacked 7/7 family phones' 6 July 2011 Last updated at 11:02 GMT The father of David Foulkes, who was killed in the Edgware Road blast, said police had contacted him Families of 7/7 bombing victims may have had their phones hacked by the News of the World, it has emerged. A solicitor for some of the relatives said one family had been told their phone may have been hacked in 2005.

The Art of Keylogging with Metasplo Rarely does a week go by without a friend or family member getting their login credentials compromised, then reused for malicious purposes. My wife is always on the lookout on Facebook, warning relatives and friends to change their passwords. Many people don't understand how their credentials get compromised. Password reuse on several websites is usually the culprit. Password reuse is a problem even if the website encrypts the passwords in their databases.

LOIC tool enables 'easy' WikiLeaks-driven DDoS attacks How was it that a loosely-coupled group of cyber-protestors could launch -- with varying degrees of success -- targeted distributed denial-of-service (DDoS) attacks against sites such as MasterCard, PayPal, PostFinance, and the website belonging to a Swedish prosecutor? Turns out it's quite simple. All an attacker need do is download the open source network stress testing tool known as LOIC (the Low Orbit Ion Cannon) that is widely available. Launching an attack with LOIC is mind-numbingly easy: just point and shoot. LOIC will then flood the target with HTTP requests, UDP and TCP packets. More about Wikileaks Artificial Intelligence Based Advanced Threat Prevention The BlackBerry Cylance 2020 Threat Report Don’t miss our annual analysis of global security issues. This year’s report includes discussions related to IOT, mobile devices, user identity, embedded systems, adversarial AI, and more.

Cybersecurity Framework Latest Updates NIST is pleased to announce the release of NISTIR 8323 (Draft) Cybersecurity Profile for the Responsible Use of Positioning, Navigation, and Timing (PNT) Services. The comment period is open through November 23, 2020 with instructions for submitting comments available HERE. NIST just published NISTIR 8286, Integrating Cybersecurity and Enterprise Risk Management (ERM). This report promotes greater understanding of the relationship between cybersecurity risk management and ERM, and the benefits of integrating those approaches.

How we found the file that was used to Hack RSA The current theory is that a nation-state wanted to break into Lockheed-Martin and Northrop-Grumman to steal military secrets. They couldn't do it, since these companies were using RSA SecurID tokens for network authentication. So, the hackers broke into RSA with a targeted e-mail attack.

70 Photoshop Tutorials For Creating Perfect Typography The aim post was not to create an article as such bu t to create a resource, which can be used as a reference point for designers to expand their knowledge on how they can use Photoshop in order to create spectacular text effects. The article features 70 high quality Photoshop tutorials, which if the steps are follow it can to turn a Photoshop and give you an understanding on the features of Photoshop. A lot of time has been put into this roundup in order to find and collect the best Photoshop design tutorials. I hope you enjoy this article and as always your more than welcome to share thoughts and any addition comments about the article it would be welcomed and highly appreciated. 1. Smoke Type in Photoshop in 10 Steps

Pro-WikiLeaks denial of service attacks: just another form of civil disobedience. - By Evgeny Morozov Judging by the last two weeks, being an enemy of Julian Assange is only marginally less stressful than being Julian Assange. Amazon, PayPal, MasterCard, and Visa, which all moved to cut ties with Assange's WikiLeaks after the site's release of diplomatic cables, have been the targets of distributed denial-of-service attacks from a group that calls itself "Anonymous." There is nothing fancy going on here. DDoS attacks simply aim to send more traffic to a target site than it can handle, slowing it down or making it temporarily unavailable.

ICO issues guidance on disclosing employee personal data under FOI The Information Commissioner's Office (ICO) said that public sector bodies must assess whether they could avoid disclosing some information about employees whilst still ensuring that "the legitimate interests" of those requesting the information are observed. "For example, could the legitimate interests be met by other means that interfere less with the employee’s rights and freedoms?" the ICO said in new guidance. (32-page / 155KB PDF) "Is it necessary to provide all of the information requested?

155 High Quality Categorized Photoshop Text Effect Tutorials With Photoshop text effects, you can make most designs stand out and it is not that hard! Typography is defined as the art and technique of arranging type, type design, and modifying type glyph. With Photoshop and the right skills and techniques at your disposal, you can push the limits of Typography to the edge. How Operation Payback Executes Its Attacks Over the last few days, companies like Visa, Mastercard, PayPal and Amazon.com have found themselves targets of coordinated distributed denial-of-service attacks, designed to force their websites and other infrastructure elements offline. The campaign, which is called "Operation Payback" (and is reportedly headed up by Anonymous), is targeting companies that have denied service to WikiLeaks and its founder, Julian Assange. In essence, what is happening is that lots and lots of individuals are hammering specific websites with TCP or UDP packets or HTTP requests. There are only so many resources to go around, which means that with enough individuals involved, even large websites can be taken down very quickly.

WebGoat - Learn the hack - Stop the attack Learn the hack - Stop the attack WebGoat is a deliberately insecure application that allows interested developers just like you to test vulnerabilities commonly found in Java-based applications that use common and popular open source components. Description Web application security is difficult to learn and practice. Not many people have full blown web applications like online book stores or online banks that can be used to scan for vulnerabilities. In addition, security professionals frequently need to test tools against a platform known to be vulnerable to ensure that they perform as advertised.