Home page. About the M-System // Leica M // Photography - Leica Camera AG. Ystudio - Brassing Sketching Pen – KOHEZI. The Intrepid Camera Co. FUJIFILM. Match Technical Services - Thumbs Up 1/3. Thumbs Up EP-3S Available in Black, Silver, Steel Grey and ME Grey For an introduction to our Thumbs Up grips and suggestions as to which model will suit you, see Thumbs Up - help. 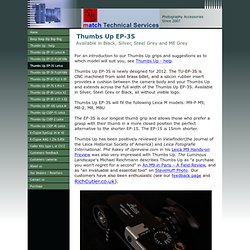 Thumbs Up EP-3S is newly designed for 2012. The TU-EP-3S is CNC machined from solid brass billet, and a silicon rubber insert provides a cushion between the camera body and your Thumbs Up and extends across the full width of the Thumbs Up EP-3S. Available in Silver, Steel Grey or Black, all without visible logo. WVIL - Wireless Viewfinder Interchangeable Lens. Congratulations, you’ve found the WVIL website. 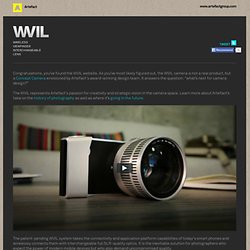 As you’ve most likely figured out, the WVIL camera is not a real product, but a Concept Camera envisioned by Artefact's award-winning design team. It answers the question: “what’s next for camera design?” The WVIL represents Artefact's passion for creativity and strategic vision in the camera space. Learn more about Artefact’s take on the history of photography as well as where it’s going in the future. 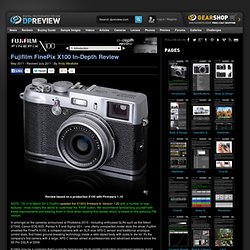 We recommend familiarising yourself with these improvements and bearing them in mind when reading this review, which is based on the previous FW version. In amongst all the cameras announced at Photokina 2010 - including enthusiast SLRs such as the Nikon D7000, Canon EOS 60D, Pentax K-5 and Sigma SD1 - one utterly unexpected model stole the show. Fujifilm unveiled the FinePix X100, a compact camera with an SLR-size APS-C sensor and traditional analogue control dials, that hides ground-breaking technology inside a retro-styled body with looks to die for. It's the company's first camera with a large, APS-C sensor aimed at professionals and advanced amateurs since the S5 Pro DSLR of 2006.

The X100, though, is something totally different. Key features Compared to... Fujifilm X100 Test Report. Exceptional But Frustrating The Fujifilm Finepix X100, to give it its full name, has been one of the most eagerly awaited new cameras of the first half of 2011. 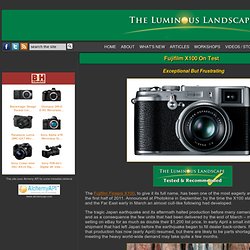 Announced at Photokina in September, by the time the X100 started shipping in Europe and the Far East early in March an almost cult-like following had developed. The tragic Japan earthquake and its aftermath halted production before many cameras had been produced, and as a consequence the few units that had been delivered by the end of March – mostly in Asia – started selling on eBay for as much as double their $1,200 list price. In early April a small initial North American shipment that had left Japan before the earthquake began to fill dealer back-orders.

Fujifilm has announced that production has now (early April) resumed, but there are likely to be parts shortages for some time, and so meeting the heavy world-wide demand may take quite a few months. Ladder and Wall. Fujifilm X100 @ ISO 200. Build Your Own Lenses. Nikon, Canon, Leica, Pentax, Sigma, Tokina, and a host of other lens makers are all striving to bring you the sharpest lenses with all optical aberrations reduced to the minimum. 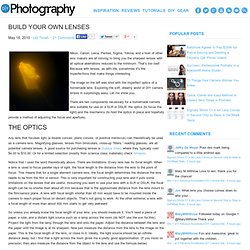 That’s too bad! Because with lenses, as with life, sometimes it’s the imperfections that make things interesting. The image on the left was shot with the imperfect optics of a homemade lens. Exploring the soft, dreamy world of DIY camera lenses in surprisingly easy. Let me show you. Peekfreak. Of Switzerland - Manufacturers of remarkable cameras - Home : THE HUMAN PRINTER.