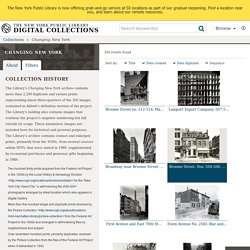 The Library's holding also contains images that continue the project's negative numbering but fall outside its scope. These anomalous images are included here for historical and pictorial purposes. The Library's archive contains contact and enlarged prints, primarily from the 1930s, from several sources within NYPL that were united in 1989, supplemented by occasional purchases and generous gifts beginning in 1988 : Support from the National Endowment for the Arts in 1991-1992 enabled a computerized inventory of the individual prints-titles, dates, sizes, physical characteristics such as various hand-stamps, additional inscriptions, paper weight and types, print quality, and preservation condition. Background Related Resources Abbott, Berenice and Elizabeth McCausland. Farm Security Administration Photographs - NYPL Digital Collections. 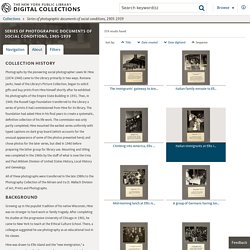 Hine (1874-1940) came to the Library primarily in two ways. Romana Javitz, head of the Library's Picture Collection, began to solicit gifts and buy prints from Hine himself shortly after he exhibited his photographs of the Empire State Building in 1931. Then, in 1949, the Russell Sage Foundation transferred to the Library a series of prints it had commissioned from Hine for its library. The foundation had asked Hine in his final years to create a systematic, definitive collection of his life work. All of these photographs were transferred in the late 1980s to the Photography Collection of the Miriam and Ira D.

Background Growing up in the populist tradition of his native Wisconsin, Hine was no stranger to hard work or family tragedy. Hine was drawn to Ellis Island and the "new immigration," a contemporary term for the waves of newcomers arriving from southern and eastern Europe and elsewhere. Related Resources. Photographs of British algae: cyanotype impressions - NYPL Digital Collections. Collection History Photographs of British Algae is a landmark in the histories both of photography and of publishing: the first photographic work by a woman, and the first book produced entirely by photographic means. 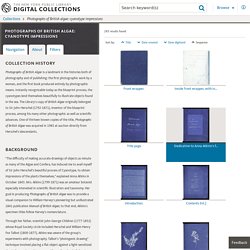 Instantly recognizable today as the blueprint process, the cyanotypes lend themselves beautifully to illustrate objects found in the sea. The Library's copy of British Algae originally belonged to Sir John Herschel (1792-1871), inventor of the blueprint process, among his many other photographic as well as scientific advances. One of thirteen known copies of the title, Photographs of British Algae was acquired in 1985 at auction directly from Herschel's descendants. Background "The difficulty of making accurate drawings of objects as minute as many of the Algae and Confera, has induced me to avail myself of Sir John Herschel's beautiful process of Cyanotype, to obtain impressions of the plants themselves," explained Anna Atkins in October 1843. 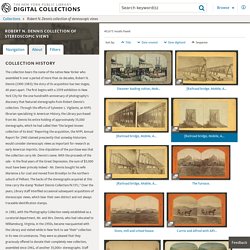 Dennis (1900-1983); the story of its acquisition has two stages, 40 years apart. The first begins with a 1939 exhibition in New York City for the one-hundredth anniversary of photography's discovery that featured stereographs from Robert Dennis's collection. Through the efforts of Sylvester L. Vigilante, an NYPL librarian specializing in American History, the Library purchased from Mr.