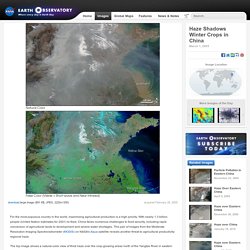 Faults in Xinjiang. Just south of the Tien Shan mountains, in northwestern Xinjiang province, a remarkable series of ridges dominates the landscape. 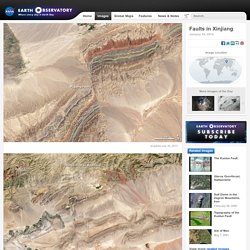 The highest hills rise up to 1,200 meters (3,900 feet) above the adjacent basins, and they are decorated with distinctive red, green, and cream-colored sedimentary rock layers. The colors reflect rocks that formed at different times and in different environments. The red layers near the top of the sequence are Devonian sandstones formed by ancient rivers. The green layers are Silurian sandstones formed in a moderately-deep ocean. Three Gorges Dam, China. A new reservoir is filling in central China. 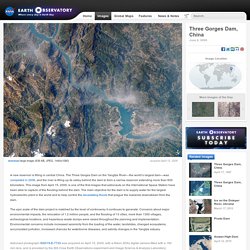 The Three Gorges Dam on the Yangtze River—the world’s largest dam—was completed in 2006, and the river is filling up its valley behind the dam to form a narrow reservoir extending more than 600 kilometers. Landslide in Southern China. On June 5, 2009, a mountainside collapsed in the Chongqing region of southern China. 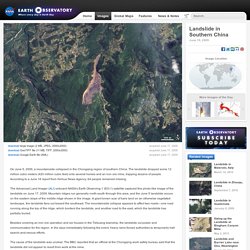 The landslide dropped some 12 million cubic meters (420 million cubic feet) onto several homes and an iron ore mine, trapping dozens of people. According to a June 18 report from Xinhua News Agency, 64 people remained missing. Algal Bloom Along the Coast of China. Acquired June 28, 2008. 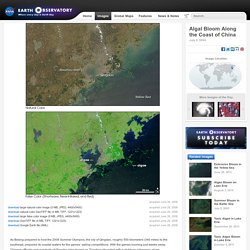 The World’s Largest Urban Area. Even for a nation known for eye-popping rates of urbanization, what has happened along China’s Pearl River Delta (Zhu San Jiao) over the past few decades is extraordinary. 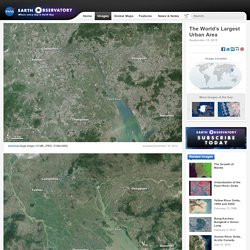 Agricultural Fields Under Snow, China. This astronaut photograph highlights hundreds of rectangular fields on either side of a 36-kilometer (22-mile) stretch of the Songhua River. 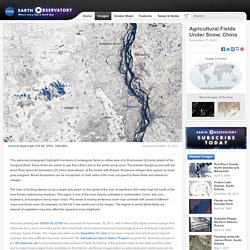 Some fields are easier to see than others due to the winter snow cover. The braided Songhua joins with the Amur River about 40 kilometers (25 miles) downstream, at the border with Russia. Numerous villages also appear as small gray polygons. Broad floodplains can be recognized on both sides of the river, occupied by fewer fields and almost no villages. Solar Farm in Dunhuang. For centuries, traders along the Silk Road relied on the oasis at Dunhuang for a reprieve from the withering sunlight and heat of the Gobi desert. 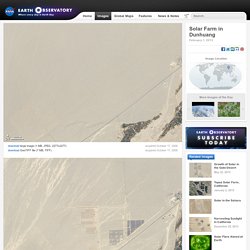 By 2011, a large solar farm on the outskirts of the city had started transforming that searing light into an energy resource for the region. The Advanced Land Imager (ALI) on the Earth-Observing-1 (EO-1) satellite captured this series of images showing the installation of solar power panels on the outskirts of Dunhuang in the Gansu province of western China. In 2006 (top image), barren desert dominated, except for the road and a few patches of agricultural fields (lower right). By 2011 (middle image), grids of photovoltaic panels began to appear in large numbers. By 2012 (lower image), thousands of square meters were covered. Growth of Solar in the Gobi Desert. October 15, 2012. 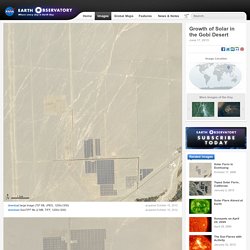 Yellow River Delta, China. Heat Wave in China. For the entire month of July and the first half of August, eastern China baked in a record-breaking heat wave. 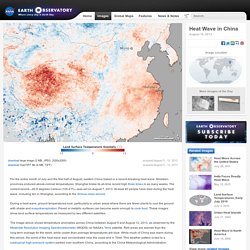 Nineteen provinces endured above-normal temperatures. Shanghai broke its all-time record high three times in as many weeks. The current record—40.8 degrees Celsius (105.4°F)—was set on August 7, 2013. At least 40 people have died during the heat wave, including ten in Shanghai, according to the Xinhua news service. During a heat wave, ground temperatures soar, particularly in urban areas where there are fewer plants to cool the ground with shade and evapotranspiration. The image above shows temperature anomalies across China between August 5 and August 12, 2013, as observed by the Moderate Resolution Imaging Spectroradiometer (MODIS) on NASA’s Terra satellite.

Satellites Map Fine Aerosol Pollution Over China. Many types of aerosol particles circulate in the atmosphere, but one of the most damaging to human health is known as PM2.5, a technical term for microscopic bits of matter less than 2.5 microns in diameter (one thirtieth the width of a human hair). These small pollutants, which come mostly from burning fossil fuels and biomass, can lodge deep in the lungs, where they exacerbate a variety of respiratory and cardiovascular diseases. Ground-based instruments are the standard for monitoring PM2.5 in many industrialized nations.

For example, the U.S. Environmental Protection Agency, along with state and local governments, maintain a network of about 10,000 ground stations that generate real-time air quality measurements for hundreds of cities. Such data gets funneled into services like AIRNow, which issues warnings when pollution reaches unsafe levels. However, not all countries have ground-based monitoring systems that measure such fine-grained pollutants.

Instrument(s): Terra - MISR. Megadunes and Desert Lakes in China. In China's Badain Jaran Desert, dozens of lakes mingle with the tallest sand dunes in the world. Researchers have long studied these features, yet mystery continues to enshroud them. What is the source of lake water? How do the megadunes develop and evolve? The Badain Jaran spans about 50,000 square kilometers (19,300 square miles) of the Alxa Desert region of Inner Mongolia. About half of that area gives rise to megadunes that tower between 200 to 300 meters (660 to 980 feet) tall. To explain how Earth's tallest dunes formed, scientists previously focused on wind conditions and sand characteristics. Salt Glaciers in Xinjiang, China. Editor’s Note: Today’s caption is the answer to Earth Observatory’s October Puzzler.

Layers of rock rich with salt and other evaporites are quite different than other types of sedimentary rock. Salt is weak—one of the weakest sedimentary rocks. It has low density, so it tends to be buoyant. And in many situations, salt behaves like a viscous fluid, oozing more like lava rather than fracturing like rock. Aquaculture in Northeast China. An astronaut aboard the International Space Station focused near the Sun’s reflection point to shoot this photograph of grid-patterned fish farms on the coast of China’s northeast province of Liaoning. The aquaculture basins have been built out from the wooded coast to a distance of nearly 6 kilometers (4 miles). Karst Landscape, China. Rounded mountains are a common theme in Chinese art. Mountains were considered sacred in Chinese culture, and mountain caves and grottoes were seen as gateways to another realm of harmony.

Such beliefs were no doubt influenced by the karst geology that covers some 13 percent of eastern and southeastern Asia. Barkol Lake, Xinjiang. Lop Nur, Xinjiang, China. Located in China’s resource-rich but moisture-poor Xinjiang autonomous region, Lop Nur is an uninviting location for any kind of agriculture.