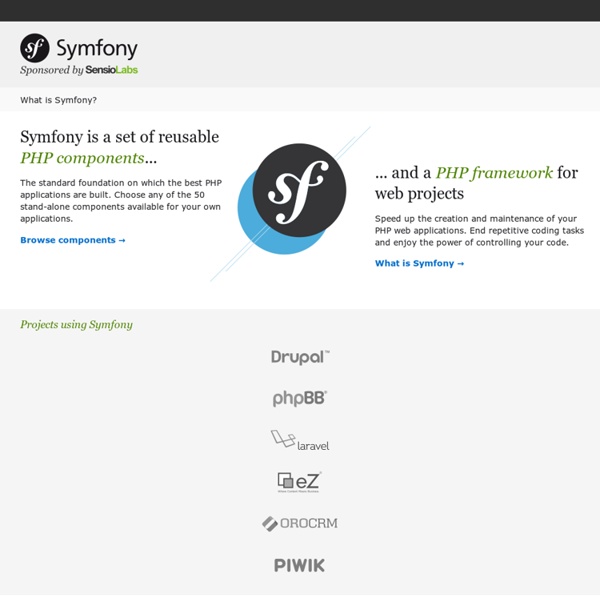 10. Events — Doctrine 2 ORM 2 documentation Doctrine 2 features a lightweight event system that is part of the Common package. Doctrine uses it to dispatch system events, mainly lifecycle events. You can also use it for your own custom events. 10.1. The Event System The event system is controlled by the EventManager. Bootstrap CSS framework Get the lowdown on the key pieces of Bootstrap's infrastructure, including our approach to better, faster, stronger web development. HTML5 doctype Bootstrap makes use of certain HTML elements and CSS properties that require the use of the HTML5 doctype.

Symfony achieves 100% PHP7 compatibility PHP7, the new version of the programming language Symfony is built with, will be released at the end of the year. The recent release of its third beta has brought us another step closer to the final stable release. During these last past months, we've been working very hard to achieve full PHP7 compatibility. This effort accelerated during the past weeks and we're glad to announce that all Symfony maintained branches are now 100% compatible with PHP7. Our PHP7 compatibility journey started on February 2015, when Nicolas Grekas added php: nightly to the list of tested PHP engines on Travis CI (see commit). After that, a lot of pull requests followed to fix PHP7 compatibility for Symfony components.

Simple JavaScript Drop Down Menu with timeout effect v2.0 « Scripts and Tricks « JavaScript DHTML Tutorials It is a One Level Menu with Timeout effect. If you are looking for advanced script, see the Multi-Level Drop-Down Menu based on simple treelike unordered list. Internet has a lot of scripts with the name "Drop Down Menu". One day I needed to make such menu for my site. I have rummaged a heap of sites and archives with scripts. And not found what I looked for. PHP — Good or Bad? It all starts with Tim Bray's little rant on PHP a few days ago. Tim can't stand PHP, because ...all the PHP code I've seen in that experience has been messy, unmaintainable crap. Spaghetti SQL wrapped in spaghetti PHP wrapped in spaghetti HTML, replicated in slightly-varying form in dozens of places.

FOQElasticaBundle by Exercise Note: This bundle has moved toFOSElasticaBundle under the FriendsOfSymfony organization. Elastica integration in Symfony2 Install elasticsearch Install Elastica Download ARML 2.0 SWG 1. Current Status of ARML 2.0 The latest version of ARML 2.0 specification can be found here: A subset of ARML 2.0 (called CARIF) was successfully demonstrated in live use at the Mobile World Congress in Barcelona by the leading AR Browser vendors Layar, Metaio and Wikitude.More information on this event can be found here: Most popular PHP Frameworks 2015 [INFOGRAPHIC] PHP is one of the most popular writing languages in today’s coding world. The reasons why, by latest statistics- it is preferred by 82% of the world’s web server software for its flexibility, database support, interactivity and abundance of Frameworks, that are easy to learn and can make the performance of your website lightning-fast. Thanks to their convenient file structure PHP frameworks give you the opportunity to organize your files and code and increase productivity.

Design a Clean Web Layout with the 960 Grid In this tutorial, we’ll be designing a clean website layout using the 960 Grid System. You’ll see how working with this system can streamline web development workflow, and how to work with a grid system. Final Image Preview