How to set up parental controls on Android - How-To. Parental Controls for Android. (In late 2012 the Android Market was replaced with the Google Play Store) Android has no general built-in parental control features, but does include rudimentary controls in the Google Play store, and you may also put apps on your Android smartphone or tablet to help keep your child safe on the Internet. 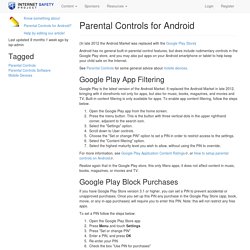 See Parental Controls for some general advice about mobile devices. Google Play App Filtering Google Play is the latest version of the Android Market. It replaced the Android Market in late 2012, bringing with it storefronts not only for apps, but also for music, books, magazines, and movies and TV. Open the Google Play app from the home screen.Press the menu button. Five-minute fix: Setting up parental controls on Android. Parents of Android fans have the ability to set up parental controls on their child’s device, and the recent release of Android 4.3 has enhanced the restricted profiles feature that was introduced with version 4.2 of the operating system. 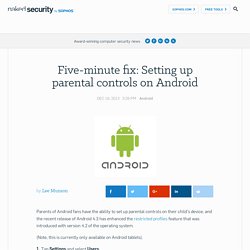 (Note, this is currently only available on Android tablets). 1. Tap Settings and select Users. 2. Tap Add user or profile. 3. At this point you will be prompted to set up a lock using a PIN, password or a pattern if you haven’t already done so. 4. 5. 6. Find instructions for parental controls for other operating systems here. Set up Family Sharing on your iPhone or iPad.

Family Sharing makes it easy for up to six people in your family to share each other’s iTunes, iBooks, and App Store purchases without sharing accounts. 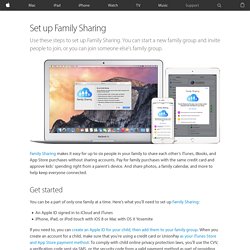 Pay for family purchases with the same credit card and approve kids’ spending right from a parent’s device. Control What Apps Your Student uses on your iPhone or iPad. With Content & Privacy Restrictions in Screen Time, you can block or limit specific apps and features on your child's device. 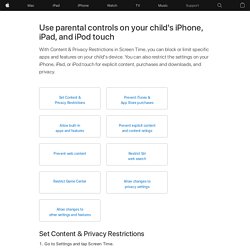 And restrict the settings on your iPhone, iPad, or iPod touch for explicit content, purchases and downloads, and privacy. Set Content & Privacy Restrictions Go to Settings and tap Screen Time.Tap Continue, then choose "This is My [Device]" or "This is My Child's [Device]. "If you're the parent or guardian of your device and want to prevent another family member from changing your settings, tap Use Screen Time Passcode to create a passcode, then re-enter the passcode to confirm. In iOS 13.4 and later, after you confirm your passcode you'll be asked to enter your Apple ID and password. A Parent's Guide to Twitter and Education.

As an educator, there are tons of great hashtags available to find the resources I'm looking for. 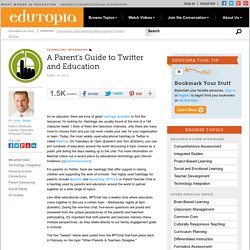 Hashtags are usually found at the end of a 140 character tweet. I think of them like television channels, only there are many more to choose from and you can even create your own for your organization or team. Today, the most widely used educational hashtag on Twitter is called #edchat. On Tuesdays at 12pm (Eastern) and 7pm (Eastern), you can join hundreds of educators around the world discussing a topic chosen by a public poll during the days leading up to the chat. For more information on #edchat check out a recent piece by educational technology guru Steven Anderson (@web20classroom). For parents on Twitter, there are hashtags that offer support in raising children and supporting the work of schools. Like other educational chats, #PTchat has a weekly time where educators come together to discuss a certain topic - Wednesday nights at 9pm (Eastern).

Last 5 #PTchats Archived. A Parent's Guide to Twitter. Chances are your teen has a page on Facebook, the social-networking website with a massive following among users ages 9 to 99. 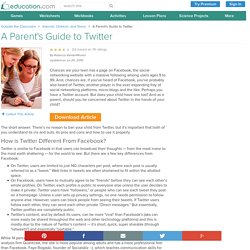 And, chances are, if you've heard of Facebook, you've probably also heard of Twitter, another player in the ever-expanding fray of social networking platforms, micro-blogs and the like. Perhaps you have a Twitter account. But does your child have one too? And as a parent, should you be concerned about Twitter in the hands of your child? A Step-by-Step Guide To Hosting or Joining a Twitter Chat. A few months ago we started up a new Twitter chat series, #Bufferchat. 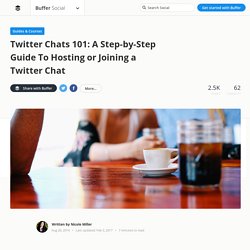 So far, we’ve talked about everything from productivity to social media monitoring and lots of other topics in between. These days, we have up to 185 participants each week, sending out nearly 2,000 tweets. It’s a true delight! Along the way, I’ve been learning the ins and outs of operating a Twitter chat and testing new tools and ideas to optimize our chat even further.

It’s amazing how much there is to know, both for the chat host and the chat participants! Reviews & Age Ratings for Movies & Media - Is it appropriate? Parent Educational Websites from @cybraryman1. ParentCamp SouthJersey Homepage. #PARENTCAMP: An Unconference For Parents & Educators.