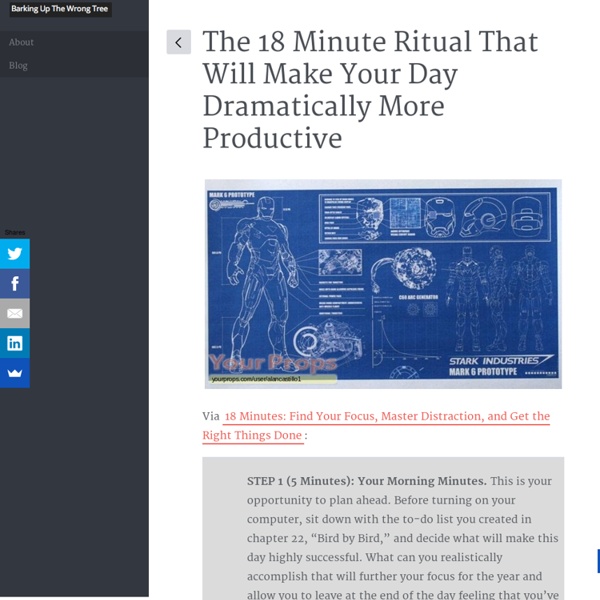 5 Ways to Make Your To-Do Lists More Effective To-do lists seem pretty straightforward: A list of all of the tasks you plan to accomplish during any given day or week. And, really, there are few things more satisfying than drawing lines through each entry. Progress! But, many times, they balloon to unrealistic levels, and we end up feeling overwhelmed and ineffective. That’s usually because we’re using them as a catch-all for every task that’s thrown at us. 1. When you take a few minutes to write your to-do list the night before, you can hit the ground running the next morning, Pozen advises. 2. Everything that goes on your daily to-do list should fit two criteria: It should be something important that you need to do--versus that which doesn’t really need to be done or which can be delegated to someone else--and something that needs to be done on that day. “When people don’t take control, they go through their days passively. 3. 4. Pozen divides his list into two columns. 5.

The Morning Routine Experts Recommend for Peak Productivity What’s the best way to start your day so that you really get things done? Laura Vanderkam studied the schedules of high-achievers. What did she find? Almost all have a morning routine. I’ve interviewed a ton of top experts about their productivity secrets: Tim Ferriss, Cal Newport, Dan Ariely, Charles Duhigg, and others. But you’re busy. So many readers have written to me saying what my friend Jason always does: “I don’t have time. Okay, time to round up what the experts have said and build a roadmap. 1) Stop Reacting Get up before the insanity starts. When I spoke to productivity guru Tim Ferriss, bestselling author of The 4-Hour Workweek, what did he say? Here’s Tim: I try to have the first 80 to 90 minutes of my day vary as little as possible. Most of us get up and it seems like things are already in motion. So of course you aren’t achieving your goals. You need to wake up before the insanity starts. (For more from Tim Ferriss on what the most productive people do every day, click here.)

Waking up early, 10 tips that work Getting up early can be a great way to help you establish a daily routine which is the first step to becoming more productive. Here I present you 10 tips that helped me in becoming an early riser. The most important step is to get up. Actually not just get up, literally try to jump out of bed. After your alarm rings get up instantly, go to another room and turn on the lights. You know, the one that always tells you: "Just 10 more minutes of sleep won't hurt right? Just don't listen to it. This was also a big game changer for me. It took me a month of living with withdrawal symptoms and headaches to get over the addiction. You won't take my word for it? Having a clear goal for getting up early is essential. If you can get yourself even a little bit excited about the things that you will accomplish the next day, waking up early won't be a problem at all. Get one of these big paper calendars (or print one out using iCal). Now let's play a simple game.

The Exact Amount Of Time You Should Work Every Day Editor's Note: This is one of the most-read leadership articles of 2014. Click here to see the full list. You know that taking frequent breaks is good for your productivity, focus, and creativity, but you just never seem to get around to it. You feel stressed and exhausted when you hammer away at your keyboard all day, and the evidence is everywhere. A study earlier this year from the University of Toronto on lunch break patterns of office workers revealed the absence of a proper lunch break can actually lower productivity. "All efforts to control behavior, to perform and to focus draw on that pool of psychological energy. Recently, the Draugiem Group, a social networking company, added to this growing body of research. "Turns out, the secret to retaining the highest level of productivity over the span of a workday is not working longer—but working smarter with frequent breaks," wrote Julia Gifford in The Muse when she posted the study’s results.

10 Things You Should Do Every Day Before 10 AM “When you arise in the morning, think of what a precious privilege it is to be alive; to breathe, to think, to enjoy, to love.” ~ Marcus Aurelius You don’t have to be a morning person to benefit from morning rituals. Most people hit snooze, roll out of bed and into some clothes while plunging into their day without a plan. You, however, can choose to approach your day mindfully. Meditate Meditating or even some simple breathing can help you begin your day with a sense of calm. There is plenty of activity during our day, make a commitment to start on a quieter note. Reflect in Gratitude “If the only prayer you said in your whole life was, ‘thank you,’ that would suffice.” – Meister Eckhart Start your day by reflecting on what you are grateful for. Set Your Daily Intention In the quiet of the day, before the fires need putting out, plan your day by focusing on three goals you want to accomplish. Make those goals a priority for the day. Pad Your Schedule Hydrate Stretch Listen to Music Smile

5 Routines To Clear Mental Clutter That smartphone in your pocket? It’s nearly doubling the amount of time you spend working. A 2013 survey by the Center for Creative Leadership found that the typical smartphone-carrying professional interacts with work an average of 72 hours a week. No wonder we’re all so stressed out. "Year after year, people complain of being more overwhelmed than they were the year before," says Scott Eblin, author of Overworked and Overwhelmed: The Mindfulness Alternative "It’s an epidemic that needs to be addressed." It started during the financial crisis of 2008, says Eblin. For Eblin, an executive coach and president of the Eblin Group, the impact of stress hit home in 2009 when he was diagnosed with multiple sclerosis. "Managing MS is about managing stress," he says. The entry point to mindfulness is awareness, but Eblin says the endless amount of distractions in today’s world makes it difficult. The opposite of fight or flight is "rest and digest." 1. 2. What was supposed to happen? 3. 4. 5.

6 Morning Habits to Guarantee a Great Day How many times have we heard that morning is the most important part of the day? It’s true. The way that we begin our day has a definite impact on how the rest of the day unfolds. We can choose to be proactive and set ourselves up for success, or we can choose to just let things unfold as they may. Since how we begin our day is so important, why would we choose to be lax in our morning routine? We certainly don’t have to be and we’ll show a few different ways to make the morning more productive. 1. Stretching is as important as getting regular exercise. Here are some benefits to stretching: – Stretching helps with posture. – Stretching improves flexibility by increasing the range of motion. – Stretching decreases injury by warming up the muscles before activity. – Stretching increases blood flow and nutrient supply to muscles. -Stretching helps to calm the mind. – Stretching releases both physical and mental tension. To increase the effectiveness of stretching, try these tips: 2. – Meditate. 3.

The Memory Palace System - The Minimalist Blog | Hobbies | Finance | Fitness | Health | Business As illustrated by the image above, memory is quite complex, but the more tools we have to harness our thoughts and power of recall, the simpler it becomes. I have been using the Memory Palace System for a few months now, but only for little things like grocery and topic lists (lists of points I want to make in a conversation or debate). However, recently I’ve been using it to memorize poetry, passages of the Bible, and other important documents, and have found that it has enabled me to memorize passages in less than half of the time it would normally. So a poem that would take 30 minutes to add to my mid/long- term memory now takes less than 15 minutes. The History of the Memory Palace The memory palace, also known as “the Method of Loci”, is the oldest mnemonic technique dating back to the ancient civilization of Rome. Creating the Mind Palace In order to remember the list below in accordance with the method, you need to create a mind palace. A Shopping List Example The List Disclaimers