Stop Procrastinating by "Clearing to Neutral" 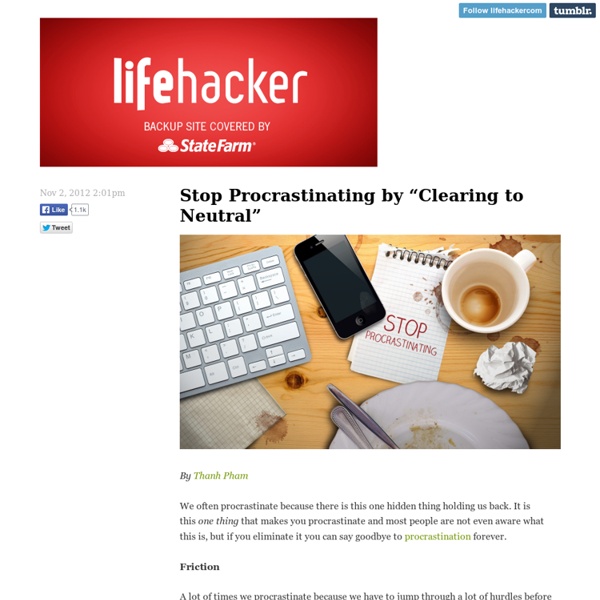 By Thanh Pham We often procrastinate because there is this one hidden thing holding us back. It is this one thing that makes you procrastinate and most people are not even aware what this is, but if you eliminate it you can say goodbye to procrastination forever. Friction A lot of times we procrastinate because we have to jump through a lot of hurdles before we can do the thing we actually want to do. To put it in other words, before you can do your main activity (cooking), you have to all these others things (cleaning) before you can get to your main activity. If you make it hard for yourself to get started, that’s when you will most likely procrastinate. Now imagine you actually cleaned your desk and now you need to do some work on your computer. All these little starting points where you have friction are very common. Now this is where, as we at Asian Efficiency like to call it, the habit of Clearing To Neutral (CTN) comes in. More Examples Next Steps

James Clear: How to Stop Procrastinating by Using the 'Two-Minute Rule' Recently, I've been following a simple rule that is helping me crush procrastination and making it easier for me to stick to good habits at the same time. I want to share it with you today so that you can try it out and see how it works in your life. The best part? It's a simple strategy that couldn't be easier to use. How to Stop Procrastinating With the "Two-Minute Rule" I call this little strategy the "Two-Minute Rule," and the goal is to make it easier for you to get started on the things you should be doing. Here's the deal: Most of the tasks that you procrastinate on aren't actually difficult to do -- you have the talent and skills to accomplish them -- you just avoid starting them for one reason or another. The two-minute rule overcomes procrastination and laziness by making it so easy to start taking action that you can't say no. There are two parts to the two-minute rule... Part One: If it takes less than two minutes, then do it now. The Physics of Real Life Try It Now

Craft the Perfect Keychain This Weekend by Adam Dachis Keychains: they’re great for keeping your keys collected and organized but often become a bulky, enormous mess. This isn’t a problem you have to live with. A few clever tools and tricks can get your keychain in order so it’s not only easy to carry but functional as well. Stop Stressing When You Need to Swap Your Keys Changing up the keys on your keychain is often one of the most frustrating task you’ll encounter, but there are a few tools that don’t cost much and can remove a lot of the frustration. To remove the stress of getting your keys on and off the ring, just get a FREEKey. Minimize the Number of Keys You Have to Carry Bulk is the other main problem most keychain owners face. Make Your Keychain Actually Useful Most keychains hold keys and stop there, but so many useful items fit on the ring as well. Got a weekend project you want us to cover?

5 Habits of People With Remarkable Willpower Willpower is not something you either have or you don't. Sure, some people may be more self-disciplined than you. Some people may be better at resisting temptation than you. But that's probably not because they were born with some certain special something inside them--instead, they've found ways to store up their willpower and use it when it really matters. They have remarkable willpower not because they have more of it, but because they've learned how to best use what they have. Here's how you can, too: 1. The more choices we make during the day, the harder each one is on our brain--and the more we start to look for shortcuts. In fact, we can't help ourselves: We've run out of the mental energy we need to make smart choices. That's why the fewer choices we have to make, the smarter choices we can make when we do need to make a decision. Say you want to drink more water and less soda. Or say you struggle to keep from constantly checking your email. Choices are the enemy of willpower. 2. 3.

The 12 Habits of Highly Connective People Anil Dash at Gel 2011 from Gel Conference on Vimeo. I started the day watching this video from Gel 2011. I love stories like Anil Dash's because I experienced myself the power of networks. Few things give you more joy than doing a good deed. Understanding the importance and power of networks, combined with new tools is our lifeline. That's what true connections can do. A couple of months back, I wrote a post about follow through, which is the secret to successful networking. Make it a habit, and you will see how quickly it yields results. (1.) believe you can make a difference in case you were wondering if this is only touchy-feely, look at how Dana White built a UFC empire out of his desire to connect with fans. (2.) think knowledge as a service it's an overused expression, it really does apply. (3.) take risks they can be small ones. (4.) have a point with your view in other words, put substance behind the approach. (5.) keep your promises (6.) say it another way (7.) show it (9.) write it down

traits of the disciplined mind The Best Hand Tools for Disaster Recovery By The Best Hand Tools for Disaster Recovery By Harry Sawyers When trees are down and power is out, the most useful gadgets are the ones that never need a charge. The situation calls for shovels, rakes, knives—and a few rolls of duct tape don’t hurt either. In the aftermath of Hurricane Sandy, Popular Mechanics posted a list of the 14 hand tools you need during disaster recovery. Here are a few highlights: Long-socket shovels to remove debrisBypass loppers to clear brushA bow saw or pruning saw to cut fallen branchesAxes and hatchets to clean up messy limbsA bow rake to collect debrisA heavy-duty wheelbarrow to haul away garbagePlastic tarps to transport materials or keep things dryDuct tape to help secure that plastic sheeting Utility knives to slice damaged drywall Safety glasses to shield yourself from flying debrisA first-aid kit for any type of small injury A few things we’d add to PM’s already thorough list—rope and twine; contractor bags; and framing hammers or sledgehammers.

How To Be Efficient: Dan Ariely's 6 New Secrets To Managing Your Time It’s hard to be efficient. Sometimes it feels like the world doesn’t make any sense. Sometimes you don’t make any sense. And sometimes it feels like it’s all a conspiracy. As we’ll see shortly, these are all, in a way, true. Dan Ariely is the king of irrational behavior. Dan is a behavioral economist at Duke University and the New York Times bestselling author of three wonderful books: Most recently he’s turned his attention to the irrationality of how we use our time and has helped create a new smart-calendar app, Timeful. What’s great is the data from Timeful is helping us learn things about what works and what doesn’t as it relates to productivity. I gave Dan a call to hear what he had to say about how we can improve time management, how to be efficient and how to get more done. 1) The World Is Working Against You This isn’t a conspiracy theory and a tinfoil hat isn’t required, but we are spending more of our time in environments that have their own agendas. Here’s Dan: (Short on time? Sum Up

6 Ways to Establish Yourself as an Industry Thought Leader So how exactly do you gain credibility as an industry thought leader ? Here are 6 things you can do to start establishing yourself as a trusted expert in your industry. It's no surprise that they all have to do with content creation ... 6 Ways to Become an Industry Thought Leader 1. 2. 3. 4. 5. 6. Leave Promotion at the Door I've said it a few times throughout this blog post, but it's important to emphasize that one of the keys to becoming an authentic thought leader in your industry is to leave promotion at the door. On the other hand, if people start to trust you and respect you as an industry thought leader, the indirect result will be greater trust in the products and services you have to offer, and ultimately, more business! In what other ways can you exhibit your industry thought leadership ? Photo Credit: Jacob Boetter

Daily Rituals: A Guided Tour of Writers’ and Artists’ Creative Habits by Maria Popova Hemingway wrote standing, Nabokov on index cards, Twain while puffing cigars, and Sitwell in an open coffin. “We are spinning our own fates, good or evil, and never to be undone,” the William James’s famous words on habit echo. “Every smallest stroke of virtue or of vice leaves its never so little scar.” Given this omnibus of the daily routines of famous writers was not only one of my favorite articles to research but also the most-read and -shared one in the entire history of Brain Pickings, imagine my delight at the release of Daily Rituals: How Artists Work (public library) by Mason Currey, based on his blog of the same title. The notion that if only we could replicate the routines of great minds, we’d be able to reverse-engineer their genius is, of course, an absurd one — yet an alluring one nonetheless. Mark Twain — master of epistolary snark, unsuspected poet, cheeky adviser of little girls — followed a simple but rigorous routine: Photograph courtesy BBC

Who Needs Photoshop? Amazing Image Editing Feats You Can Do With MS Word Do you have $1000? Go ahead and buy a copy of Adobe Photoshop CS6. The skills to use it aren’t part of the package, but with the help of Photoshop tutorials and our very own Photoshop guides, you can get a smidgen of them. Don’t bring out the telescope yet, because a nice little software that goes by the name of Microsoft Word is sitting there on your computer. There are some amazing image editing feats you can do with MS Word 2010 and its image editing tools. Head for the Picture Tools Most of the image editing magic in MS Word 2010 lies in the Picture Tools tab. It Could Start With a Screenshot It could just have escaped you, but Microsoft Word (and the other apps too) does have a handy screenshot tool. Remove Red Eye with the Picture Manager You can find the Microsoft Office Picture Manager under Microsoft Office 2010 Tool. You can also use the Picture Manager to resize and compress the final pictures. Embed an Image in a Shape 1. 2. 3. 4. Give Your Edges a Softer Touch 1. 2. 3. 1. 2. 3.

Thinking too much promotes stagnation.