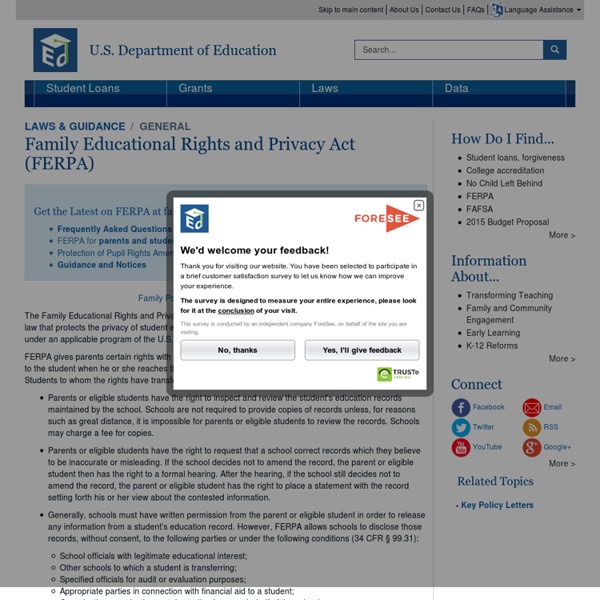 Family Policy Compliance Office (FPCO) Home The Family Educational Rights and Privacy Act (FERPA) (20 U.S.C. § 1232g; 34 CFR Part 99) is a Federal law that protects the privacy of student education records. The law applies to all schools that receive funds under an applicable program of the U.S. FERPA gives parents certain rights with respect to their children's education records. Parents or eligible students have the right to inspect and review the student's education records maintained by the school. Schools may disclose, without consent, "directory" information such as a student's name, address, telephone number, date and place of birth, honors and awards, and dates of attendance. For additional information, you may call 1-800-USA-LEARN (1-800-872-5327) (voice). Or you may contact us at the following address:

Bullying No. 80; March 2011Click here to download and print a PDF version of this document. Bullying is a common experience for many children and adolescents. Surveys indicate that as many as half of all children are bullied at some time during their school years, and at least 10% are bullied on a regular basis. Bullying behavior can be physical or verbal. Boys tend to use physical intimidation or threats, regardless of the gender of their victims. Children who are bullied experience real suffering that can interfere with their social and emotional development, as well as their school performance. Children and adolescents who bully thrive on controlling or dominating others. If you suspect your child is bullying others, it's important to seek help for him or her as soon as possible. If you suspect your child may be the victim of bullying ask him or her to tell you what's going on. It's also important to respond in a positive and accepting manner.

Professional Ethics Introduction Top The debate concerning the ethics of education that took place in the United States at the beginning of the 20th century has gained renewed, worldwide interest in the past two decades. The contemporary debate targets two overlapping sides of the role morality plays in education: the moral behaviour of the teacher and the morality children learn in school. In 2001, Education International (EI), officially entered this debate when the Declaration on Professional Ethics (DPE) was adopted by EI’s 3rd World Congress held in Jomtien, Thailand. The DPE is mainly intended as a blueprint for EI affiliates' own guidelines. Its objectives are: to raise consciousness about the norms and ethics of the teaching profession; to help increase job satisfaction in education; to enhance status and self-esteem, and; to increase respect for the profession in communities. Policy Top The EI Declaration on Professional Ethics represents the core values of the teaching profession itself. Studies:

False history, gas chambers, blue smoke, and cracked mirrors <a href=" history, gas chambers, blue smoke, and cracked mirrors.</a> History just isn't as reliable as we want it to be. v.tr.1. 2. Rare is the Japanese student who is taught of the Rape of Nanking, the wartime medical "experiments" undertaken in Manchuria, or the Bataan Death March Bataan Death March (April 1942) Forced march of 70,000 U.S. and Filipino prisoners of war (World War II) captured by the Japanese in the Philippines. assassins Fanatical Moslem sect that smoked hashish and murdered Crusaders (11th—12th centuries). Brutus conspirator and assassin of Julius Caesar. d`z ), plant of the family Leguminosae (pulse family), native to Japan. field of wildly varying theories, and, more recently, one of the jurors in the first Rodney King trial asserted that King was completely in control of his own beating; this was an event that was videotaped, mind you. It gets worse.

Copyright and Fair Use Disclaimer The information presented here is only general information. Legal advice must be provided in the course of an attorney-client relationship specifically with reference to all the facts of the particular situation under consideration. Such is not the case here, and accordingly, the information presented here must not be relied on as a substitute for obtaining legal advice from a licensed attorney. Updated January 28, 2011 Consistent with BOR Policy IV-3.20, the UMUC Library has developed guidelines for the use of copyrighted materials. The UMUC Library addresses copyright and intellectual property issues because of its role in teaching and promoting information literacy. An Introduction to Copyright What Is Copyright? What Can be Copyrighted? Tangible, original expressions can be copyrighted. Fixation: The item must be fixed in some way. What Cannot be Copyrighted? Works in the public domain: Ideas are in the public domain. What Does Copyright Protect? Top An Introduction to Fair Use

Friends . Bullies someone else. No matter what situation or form it comes in, bullying can make you feel depressed, hurt, and alone. It can keep you from enjoying the activities and places that are part of your life. Bullying happens everywhere, whether it's your town or Paris, France. It happens all the time, and it's happened since forever. Because it's so common, many adults think bullying is just a normal part of growing up. But why should something that can make a person so miserable have to be part of growing up? Let's start by looking at the different kinds of bullying: Physical bullying means: Hitting, kicking, or pushing someone...or even just threatening to do it Stealing, hiding or ruining someone's things Making someone do things he or she don't want to do Verbal bullying means: Name-calling Teasing Insulting Relationship bullying means: Refusing to talk to someone Spreading lies or rumors about someone Making someone do things he or she doesn't want to do What do all these things have in common?