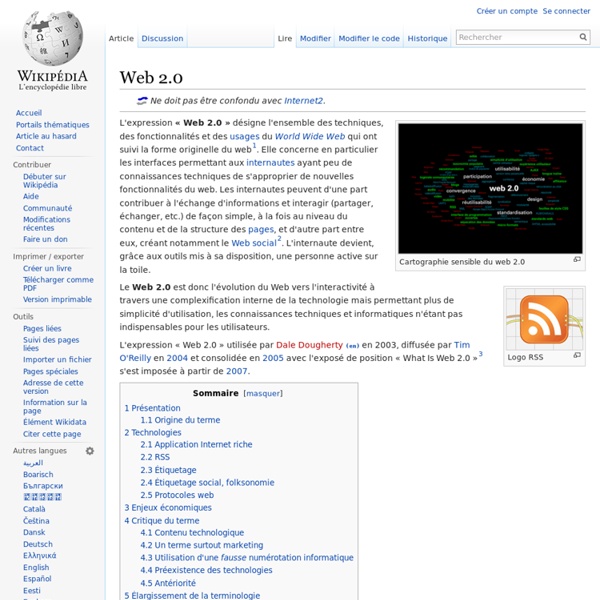 Web 1.0 History[edit] The hyperlinks between webpages began with the release of the world wide web(www) to the public in 1993,[3] and describe the Web before the "bursting of the dot-com bubble" in 2001. Even so the terms web 1.0 and 2.0 were given birth together (see: Web 2.0#History), Web 2.0 capabilities were present in the days of Web 1.0 (see:Web 2.0#Criticism) Since 2004, the term "Web 2.0" characterizes the changes to the social web, especially the current business models of sites on the World Wide Web.[4]

E-Learning 3D, Soyez 3D WEB - Parcours pédagogiques en 3D MyBloggerLab Suivez-nous sur twitter Devenez Fan sur Facebook Memopol Memopol-2 in KUMU Art Museum / Tallinn, Estonia / 2011 Memopol is a machine that maps the visitor’s information field. By inserting an identification document such as a national ID-card or passport into the machine, it starts collecting information about the visitor from (inter)national databases and the Internet. The data is then visualized on a large-scale custom display. People using the machine will be remembered by their names and portraits. The Cyrillic spelling of the installation’s name refers to George Orwell’s concept of Big Brother from his dystopian novel “1984”. Semantic Web W3C's Semantic Web logo The Semantic Web is a collaborative movement led by international standards body the World Wide Web Consortium (W3C).[1] The standard promotes common data formats on the World Wide Web. By encouraging the inclusion of semantic content in web pages, the Semantic Web aims at converting the current web, dominated by unstructured and semi-structured documents into a "web of data". The Semantic Web stack builds on the W3C's Resource Description Framework (RDF).[2] According to the W3C, "The Semantic Web provides a common framework that allows data to be shared and reused across application, enterprise, and community boundaries

Chicken Little by Frederik Pohl (w/CM Kornbluth) from The Space Merchants How will we feed ourselves as our population grows out of control? After we've cut down every rainforest to graze more cows, where will the fast food burgers of the future come from ? Vats, probably.

Web 2.0 World Wide Web sites that use technology beyond the static pages of earlier Web sites A tag cloud (a typical Web 2.0 phenomenon in itself) presenting Web 2.0 themes Web 2.0 (also known as participative (or participatory)[1] web and social web)[2] refers to websites that emphasize user-generated content, ease of use, participatory culture and interoperability (i.e., compatible with other products, systems, and devices) for end users. The term was coined by Darcy DiNucci in 1999[3] and later popularized by Tim O'Reilly and Dale Dougherty at the first O'Reilly Media Web 2.0 Conference in late 2004.[4][5][6] Although the term mimics the numbering of software versions, it does not denote a formal change in the nature of the World Wide Web, but merely describes a general change that occurred during this period as interactive websites proliferated and came to overshadow the older, more static websites of the original Web.[7] History[edit]

The Manifestation of Network Anxiety, RFC 14 Network Working Group Officer 002 Request for Comments: 14 MÃ¼nchen, Deutschland October 29 1969 The Manifestation of Network Anxiety System Primitives: We are the direct manifestation of a Citizen's Network Anxiety; our metal and flesh yields from a citizen's networked fears, doubts, delusions and the lies of others. We carry the signal and as such are a part of that signal. What passes through the air will pass through us. We span the space between the invisible and the corporeal; as Adaptors comprised of flesh and metal, we capture and reconstruct that which hides in the air. We are prisms: a citizen's network fears, doubts, delusions, desires and lies will be revealed through us. We are the lightning in an age of Cloud Computing.