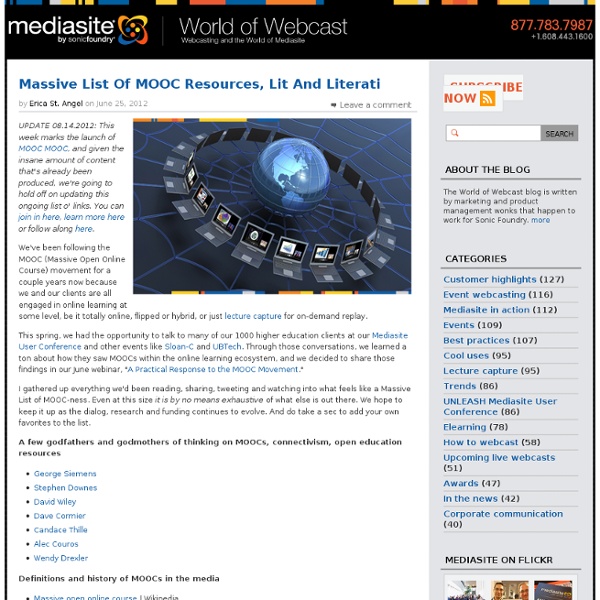 UPDATE 08.14.2012: This week marks the launch of MOOC MOOC, and given the insane amount of content that's already been produced, we're going to hold off on updating this ongoing list o' links. You can join in here, learn more here or follow along here. We've been following the MOOC (Massive Open Online Course) movement for a couple years now because we and our clients are all engaged in online learning at some level, be it totally online, flipped or hybrid, or just lecture capture for on-demand replay. This spring, we had the opportunity to talk to many of our 1000 higher education clients at our Mediasite User Conference and other events like Sloan-C and UBTech. Through those conversations, we learned a ton about how they saw MOOCs within the online learning ecosystem, and we decided to share those findings in our June webinar, "A Practical Response to the MOOC Movement." A few godfathers and godmothers of thinking on MOOCs, connectivism, open education resources Research on MOOCs

10 places where anyone can learn to code Teens, tweens and kids are often referred to as “digital natives.” Having grown up with the Internet, smartphones and tablets, they’re often extraordinarily adept at interacting with digital technology. But Mitch Resnick, who spoke at TEDxBeaconStreet, is skeptical of this descriptor. Sure, young people can text and chat and play games, he says, “but that doesn’t really make you fluent.” Mitch Resnick: Let's teach kids to code Fluency, Resnick proposes in this TED Talk, comes not through interacting with new technologies, but through creating them. The former is like reading, while the latter is like writing. Teaching a MOOC: Lessons Learned & Best Balch Practices « the augmented trader I just completed teaching a MOOC on Computational Investing via coursera.org. I did some things right and a lot of things wrong. Here are my lessons learned from the first round. I’m very excited now about the second go at this, and the ability to make the course even better. Some of these items are coursera specific, but many apply more broadly. Some people will be upset: Be prepared

Assessing MOOCs at HigherEdTech conference LAS VEGAS -- You probably won't be surprised to learn that amid all the high-profile speakers (such as the former Harvard University President Lawrence H. Summers and ex-New York City schools chief Joel Klein) and the many topics discussed (the rise of "big data," the transformation of the textbook industry) at last week's HigherEdTech Summit here, MOOCs reigned. As was true throughout the last year, when massive open online courses roared onto the scene and dominated talk about technology (and many other things) in higher education, quite a bit of the daylong discussion at the summit (part of the mammoth and glitzy International Consumer Electronics Show) revolved around how game-changing MOOCs have been and will be. But so, too, was there a good bit of nuance, and some thoughtfulness about what won't (and shouldn't) change. But Ng perceived progress on that front. To reinforce Thille’s argument, Ng offered an example from his own 100,000-student MOOC on machine learning last spring.

5 Sites Providing Free IT Certification Training Image Source: Flickr.com There are so many IT certifications out there; where do you start? What if the expensive study guide you buy ends up being the wrong track for you? Why don’t you start with what’s free? MOOC pedagogy: the challenges of developing for Coursera In the summer of 2012 the team of teachers and researchers associated with the MSc in E-learning programme at the University of Edinburgh began developing a Massive Open Online Course (MOOC) for the Coursera platform. Launched only a year earlier, this for-profit company founded by Stanford professors Andrew Ng and Daphne Koller has focussed primarily on hosting computer science related courses from big name US institutions. The recently announced partnership with the University of Edinburgh presented the team with an opportunity to engage and experiment with the much-publicised MOOC format, and foreground issues related to the theory and practice of online education itself. Designing for MOOCs

As California Goes? California has taken centre stage in the discussions around online learning and MOOCs in recent weeks, prompted by passage of tax increases (see more and more) to cover rising deficits in the state's higher education system. An organization called 20 Million Minds (20MM) organized a conference to discuss proposals. E-Literate provided very good coverage of the event, which was called Re:Boot California Higher education - a post listing statements made before the conference, some opening thoughts from Michael Feldstein, Senate President Pro Tem Darrell Steinberg's introduction, and bottleneck courses. At WCET, Phil Hill describes the state's increasing rolein the governance of the system. What will the future hold in the rethought California system? Tanya Roscorla summarizes three major points:

50 Top Sources Of Free eLearning Courses Whether you are looking for a master’s degree program, computer science classes, a K-12 curriculum, or GED study program, this list gives you a look at 50 websites that promise education for free. From databases that organize over 1,000,000 students throughout 16 universities, to a small library of documents for those interested in history, the opportunities for free online learning continue to expand as the Internet becomes a crucial component in education. 1. UMass Boston Open Courseware The UMass courseware offers a broad range of classes in areas like psychology, biology, early education, political science, history, mathematics, and others.

MOOCs are really a platform We can officially declare massive open online courses (MOOCs) as the higher education buzzword for 2012. Between Coursera, edX and smaller open course offerings, nearly $100 million in funding has been directed toward MOOCs in that past 8 months. Newspapers from NYTimes to Globe and Mail to publications such as the Chronicle of Higher Education, TV programs such as NPR, radio programs such as CBC, and a few hundred thousand blog posts have contributed to the hype. In higher education, there is joyful abundance of opinions on the topic, ranging from breathless proclamations of their disruptive potential to general dismissal of any value. I’ve captured numerous articles here on diigo. Largely lost in the conversation around MOOCs is the different ideology that drives what are currently two broad MOOC offerings: the connectivist MOOCs (cMOOCs?)

10 Sites to Learn Something New in 10 Minutes a Day Allow me to lay a scene: It's 7:00 am. The kids need to be fed and bundled off to school. The toast is burning. The cat just knocked a pile of papers off the counter, and you've got a big presentation to give in an hour and you haven't even begun to prepare. Okay, so that bit of fiction certainly doesn't describe all of us, but there is a universal truth to it: our lives are busy and hectic and we have little in the way of spare time. So how can we ever find the time to actually learn something new? MOOC's for Credit come to California Take note, folks. It’s here: “MOOCs” for credit. California Governor Jerry Brown, San Jose State University President Mo Qayoumi, and Udacity co-founder and CEO Sebastian Thrun held a press conference this morning to announce a pilot program that marks a first for the state: San Jose State will award college credits for special versions of select Udacity classes. The pilot program will be available to a group of 300 students from San Jose State, community colleges and high schools, but it’s really aimed at the latter two groups — in the hopes of boosting students’ “college readiness” and with the recognition that the wait lists for California’s community colleges make it incredibly challenging for these students to get into introductory classes. (In the fall of this school year, The LA Times reported that some 470,000 California students were on waiting lists for community college classes.) The Year of the “MOOC”?

Top 40 Useful Sites To Learn New Skills The web is a powerful resource that can easily help you learn new skills. You just have to know where to look. Sure, you can use Google, Yahoo, or Bing to search for sites where you can learn new skills , but I figured I’d save you some time.