Walk The Web Step By Step 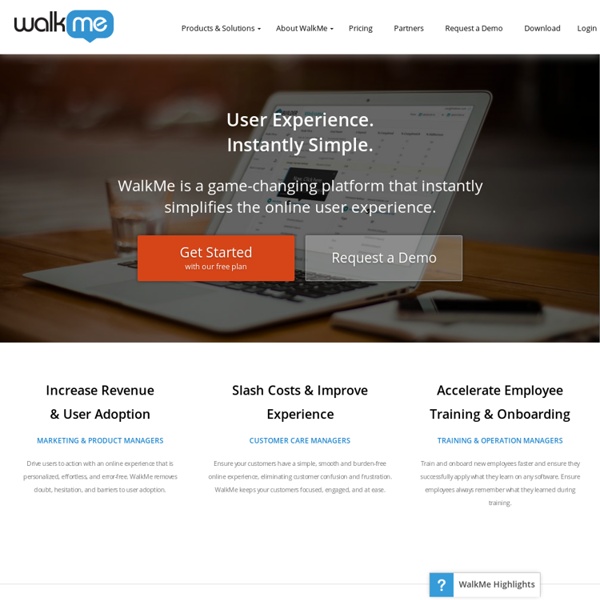 Articulate Storyline 2 - Online Training Software Feel like a pro even if you’re a beginner with Storyline’s familiar, intuitive user interface. No training required. Make your workspace your own. No need to create from scratch, unless you want to. Create more relatable courses by adding 47,500 combinations of photographic and illustrated characters, expressions, and poses. “Began building my first @Articulate #Storyline project today. Carlin Doesken @CarlinDoesken Easy interactivity, without limits. Create virtually any interaction under the sun in minutes. Storyline’s simple enough for beginners, powerful enough for experts. If you can imagine an interaction, you can easily build it with Storyline’s slide layers, triggers, and states. Drop buttons, sliders, markers, and hotspots on your slide to add interactivity in seconds. Respond to learners with dynamic, personalized content. “Storyline is only limited by your imagination.” Mr. @matthewdswift Show, don’t tell. Build a more immersive, engaging learner experience with video and simulations.

Sydney Brenner - Scientist - Inside-out genetics gives faster results - Web of Stories And so our job then... and every classical genetical thing, whether it was in phage or bacteria or C. elegans (Caenorhabditis elegans), and that is the way I began... began with a mutant hunt. You hunt for mutants and then you classify them. The way you classify mutations is you put them into the same organism and you see whether they complement each other. 30 New Web and Mobile GUI kits and Wireframe Templates Just as we did a few days ago with free icon sets, today we take a look at and share with you the latest, the most extensive and the most detailed web and mobile GUI kits and wireframe templates currently available for free. All of the kits and templates below have all been designed with modern design trends in mind, and are all chock-full of components, widgets, form elements, buttons, navigation systems and menus, various page templates, and much, much more. Basically, everything you could possibly need for designing or wireframing a web site or mobile app. The kits and templates are mainly available in either PSD, EPS or AI formats, but there also a few that come in SVG, Fireworks or Sketch formats. Here they are: Web Framework UI Kits Foundation 5 UI Kit by Stephen Way (Sketch Format). Bootflat, a Flat Bootstrap UI Kit (PSD Format). Bootstrap-Based UI Kit by Little Neko (PSD Format). Wireframe & Mockup Templates Wireframing Vector UI Kit by Giles Newman (PSD Format). GUI Templates

Martin Raff - Scientist - Advice to young scientists: Do important science! - Web of Stories Jim Watson’s view is if, I think it was Jim, if you want… you want to be a great scientist, do important, great science, and although that seems absurd, the point in science is to try to do something important early. The earlier, the better. Because if you make a discovery, there’s no other way to gain the confidence that you can make a discovery, because when you find something… So when I told you about that first year when we made a discovery that was, actually turned out to be quite important, it took me months before I could see that this was an important discovery, because how could I have made an important discovery, it makes no sense. So my advice, I guess to a young scientist is to put yourself in a position where your chances of making a discovery that’s of note is greatest.

John Maynard Smith - Scientist - Helen Spurway - Web of Stories Helen, I have to say, I probably learned as much from her as I did from him. I learnt from Helen the absolute importance of writing down what you see as a scientist, not what you'd like to see or what you hoped to see, but what actually happened, and to write it down at the time and so on. I mean she was a meticulous observer, Helen. Give her an animal and she'd keep it and it would be breeding if you could give her one of each sex, I mean, she was marvellous with animals, she was a marvellous observer.

The 20 best tools for online collaboration Individuals in design teams don't always work together in the same office. You may be positioned in distributed groups, or working from home, and clients can come from all over the world. This is where collaboration tools come in – they make it easier and faster for designers to get feedback and approve artwork in a professional manner, and they come in all sort of forms, from free Android apps to Chrome extensions. Here we gather together some of the best available online tools to allow designers to collaborate together in real time. Some are created specifically for designers, some serve as a concept crafting whiteboard, and we've also included some more full-on project management tools for when you need to take your collaborative project to the next level. 01. Want to improve communication with your team? Perfect for anyone managing a team of remote employees, Slack enables project development to move forward more smoothly. 02. 03. 04. 05. appear.in 06. 07. 08. 09. 10.

Designer Genes Are these types of genetic modifications realistic? Yes. Scientists have already made or attempted modifications similar to the ones you will be dealing with in this rotation. While some of the modifications have been successful, both scientifically and commercially, others have failed or been rejected by the community. Your tasks in this rotation deal not only with whether a genetic modification could be done technically, but also to consider whether or not the genetic modifications are ethical and should be allowed. You work and recommendations will need to be based on and backed up by facts. I don't know very much about genetics! This project provides many resources, including step-by-step guides, to help you think through the issues you are dealing with one step at a time. How do I get started? Simply click on "Introduction" in the left menu under "Your Tasks." Note: Students must complete a focus group early in this rotation.

home Aaron Klug - Scientist - 'Pusztai affair' and genetically modified crops - Web of Stories The first GM crops to be made... the first vegetables to be made were tomatoes, they were made by ICI quite a long time ago, and in the early nineties there were tomato paste on sale in British stores made of GM tomatoes, but the point about the GM tomatoes was that they were made for a special purpose. They prolonged the ripening period, and they also... the consistency of the tomato was also less... it was much harder, so you could in fact, it was picked with less damage and there were many other things you could build in. Tomatoes... people had studied what are called quantitative loci in genetics where you have something like the shape of a... or the solidity of tomatoes is governed by about seven different genes. People study these things, they're called quantitative trait loci, T-R-A-I-T, QTLs, this is a branch of genetics where they try to measure the amount of contribution of given genes are to different things. So now what happened is that the...

Research Blog Free Testing and Quizzing Tools for Online Education - eLearning Industry At the following list of Free Testing Quizzing Tools for Online Education you will find 14 Free Online Tools that you can use for Testing and Quizzing at your traditional or online classroom! I have used the most of them but I am not going to tell you which is my favorite! Create the best Course for your School with the Right Vendor Find, choose and compare the top eLearning Content Development Companies for K12! You have to try them your self and share with me your thoughts! If you know a Free Testing and Quizzing Tool that is not included in the list please share it with me! ClassMarkerClassMarker's secure, professional web-based testing service is an easy-to-use, customizable online test maker for business, training & educational assessment with tests and quizzes graded instantly - saving hours of paperwork! You may also find the following lists of tools useful: {slideshare}[slideshare id=15304156&doc=freetestingandquizzingtoolsforonlineeducation-121122152410-phpapp02]{/slideshare}