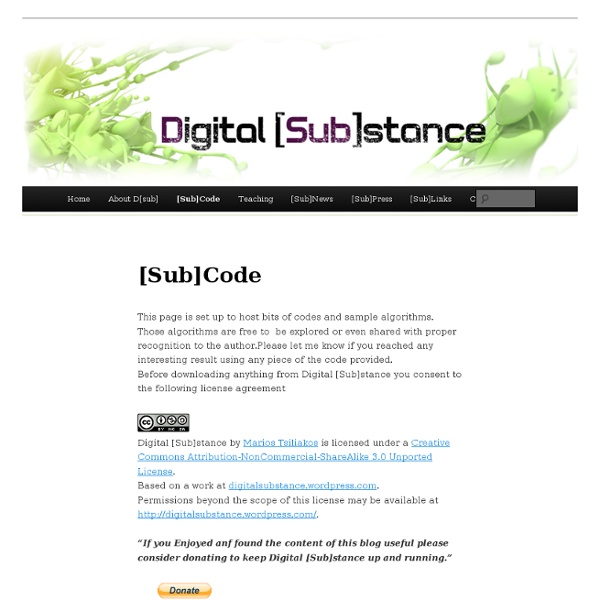 This page is set up to host bits of codes and sample algorithms. Those algorithms are free to be explored or even shared with proper recognition to the author.Please let me know if you reached any interesting result using any piece of the code provided. Before downloading anything from Digital [Sub]stance you consent to the following license agreement Digital [Sub]stance by Marios Tsiliakos is licensed under a Creative Commons Attribution-NonCommercial-ShareAlike 3.0 Unported License. Based on a work at digitalsubstance.wordpress.com. Permissions beyond the scope of this license may be available at “If you Enjoyed anf found the content of this blog useful please consider donating to keep Digital [Sub]stance up and running.” Grasshopper Definitions

Parametric Furniture Research | Fishtnk Design Factory [archive/blog] In collaboration with: Dan Hambleton, MESH consultants. The study has been on going collaborative project which has resulted in a unique approach on structural optimization and material performance analysis furniture and product design for. With the increase of analytic + parametric software presence in design processes, the ideas of mass-customization in large scale production becomes more approachable than ever. The Vessel Chair by fishtnk became a case study for this research. The outcome is developed as a malleable algorithm to be applied to different disciplines for material and structural optimization on the principals of mass-customiza tion. Pieces like Three, Vessel chair, Bungeeseat, Leftover chair are a few that were developed to production level. This collection is developed in Grasshopper for Rhino software platform. The Cortical Chair has been the latest addition to this research :

Architects are starting to 3D print houses—but without a house-sized printer A couple of months ago, Dutch architect Janjaap Ruijssenaars announced that he was building a curvy, loopy and for some reason, largely see-through building, to be made with the help of Enrico Dini’s D-Shape 3D printer. The project would cost up to 5 million euros ($6.4 million) and be completed in 2014. Janjaap Ruijssenaars’s twisty, loopy 3D-printed building. Another group quickly piped up, declaring that a similar project they were working on would be done even faster and cheaper. Softkill Design’s web-like confection of a building. This month, another Dutch company jumped into the fray. DUS Architects plan to use non-traditional 3D printing methods to build a traditional house along a canal in Amsterdam. 3d house-printing—it certainly sounds like a brilliant idea. But what does this 3d house-printing actually mean? How it works A cast concrete sample detailing the resolution of the combined additive (3D printing) and subtractive (robotic milling) fabrication process being developed.

Single Line Font for Fabrication A common part of fabrication is labeling the parts to make assembling easier, but typical TrueType fonts generally aren’t ideal for fabrication. After looking into them a little, we discovered that the it was because fonts need to be closed profiles and not just paths. There are some pseudo single line fonts that can help minimize this problem, though there are often artifacts that may come through as missing or extra lines when Rhino drops part of the closed profile. As an alternative, we used a script component in Grasshopper to convert strings into fairly simple curves. One of the cons with this approach is that because each character is explicitly created there is the chance that some needed characters are missing, though more could always be added as the need arises. Behold the Timplex font. Download Grasshopper Single Line Font, 8.76 kB

LaN / LIVE ARCHITECTURE NETWORK Tree_Columns(Rhino_Grasshopper) video inside 主要利用Grasshopper裡面的Divide Curve功能 從一個點 到一個圓上的等分點 再依等分點畫圓後再等分 類似RECURSIVE的做法 利用ARC(SED)的指令 Mainly using the Divide_Curve function in Grasshopper to draw a RECURSIVE way with Circle and Arc Function We started from a point and the point branched out to 4 circles then we divided each of the circles by 4 then connected the center of the circle to the 4 divided points which move a certain distance from the center point 所以完成樹支之後 可以調整圓的大小以調整樹枝外岔的寬度 以下是GRASSHOPPER檔案 After Finishing the branches, we could start to play with the angle of the spreading and the radius of the branches the picture below are the Grasshopper file 以下是調整參數的變化 也就是等分點的變化 Image below are the process of how to get the branches by divide circle 可以調整樹支的外擴範圍 We could change the spreading angles of the branches 再來就是把他變成陣列 做為建築的柱子 Array the tree as columns then

Vortex | [Complex Geometry] Another attractor definition; this time I’m using a similar principle to the one I applied in the pattern transformation exercise I published some time ago; from a regular array of points I’m applying a rotation using several attractor points, generating this kind of vortex; a really nice effect in my oppinion; if You are familiar with the exercise I mentioned before, or if you plan to give it a try, you’ll find several diferences, given that Grasshopper have had several improvements since the time I developed that excercise; I probably should take some time to revisit my old definitions and update them, maybe some day I will. As usual, you can download the definition from the link bellow, this time I’m not including any example file, since all the geometry you need is internalized in the definition; if You want to change the atractor points, just create your own ones in Rhino and assign them to the geometry inputs Creative Commons Attribution-Share Alike 3.0 Unported License

Space Symmetry Structure TUTORIALS A lot of people have been asking me how I create my renderings. Since I am finished with grad school, I decided to develop some tutorials that explain techniques I used throughout architecture school. Many of the techniques only require Sketchup and Photoshop. Others later on will be a little more advanced and involve rendering programs that can be downloaded for free. . These Designers Are Remaking the Portfolio Into a Client Magnet Secret Weapon For established firms, freelance professionals, and students just starting out, today’s portfolio needs to be more than just the simple presentation of past work. The portfolio has to be a representation of aesthetic, vision, and personality — it has to tell the story of who this person is and all of what they can accomplish. “Creating a great portfolio today requires a very different approach than previous times,” says Gregory Walker, principle at Houser Walker Architecture firm of Atlanta. “We’re always looking to communicate the stories of how a design solution emerged over time,” he says, “how the final solution communicates the designer’s intent and also the client’s needs.” Add To Collection Save this image to a collection A Blurb book by Houser Walker With advances in print-on-demand through companies like Blurb, the portfolio can now be precisely tailored to meet individual needs, while also maintaining an unmatched level of quality. Blurb book by Terry Jackson