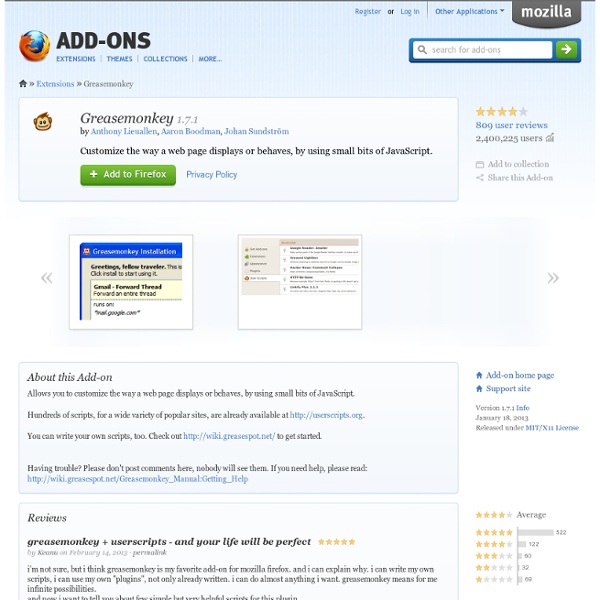 Scribd Userscripts Script Summary: THE MOST ADVANCED AND UPDATED ANTI-SPAM. . . . . . . . . . If there is spam you want blocked the fastest way to alert me is to email at my4chanantispam@yahoo.com Send the entire spam message, and what specific board it's from, and thread link so I can test the script on it. Thank you. License: Copyright (c) 2010 ee The script is 100% free, but if you'd like to make a small donation it would be greatly appreciated. Thank you! Greasemonkey Un article de Wikipédia, l'encyclopédie libre. En mars 2012, près de 75 000 scripts sont mis à disposition au grand public par les internautes qui les ont conçus[6]. Notes et références[modifier | modifier le code] Voir aussi[modifier | modifier le code] Sur les autres projets Wikimedia :

Boîte de réception - philippe.b04 - Gmail Why IE9 is a Web Designer’s Nightmare Web professionals have been getting pretty excited lately, and it’s no surprise why. The latest spawn of Microsoft’s browser, Internet Explorer 9, has just been released. Many people have been talking about the changes and whether the latest version is a solid step forward, or if it’s too little, too late. In a previous article, Jacob Gube (this site’s founder) had a more positive view of IE9. I’m here to play devil’s advocate and present the other side of the coin. My Rocky Relationship with IE9 Greasemonkey Greasemonkey is a Mozilla Firefox extension that allows users to install scripts that make on-the-fly changes to web page content after or before the page is loaded in the browser (also known as augmented browsing). The changes made to the web pages are executed every time the page is viewed, making them effectively permanent for the user running the script. Greasemonkey can be used for customizing page appearance, adding new functions to web pages (for example, embedding price comparisons within shopping sites), fixing rendering bugs, combining data from multiple web pages, and numerous other purposes.

Mozilla cracks down on slow starting Firefox add-ons Firefox's expandability through add-ons is often cited as a key feature of the browser, but it is also known to be a source of sluggish performance and slow startup times, particularly when running several add-ons simultaneously. Things have notably improved with the release of Firefox 4, but there's still work to be done, and as such Mozilla is starting an initiative to get add-on makers to optimize their programs. According to Mozilla's Justin Scott, Product Manager for Add-Ons, the average Firefox extension increases startup time by about 10%.

Greasemonkey Makes Firefox Unbeatable Greasemonkey is an excellent addon which makes Firefox a lot better. Unlike many other addons that let you do one particular thing, possibilities with this one are incredible. Greasemonkey extension lets you add so called ‘user scripts‘ which can add more functionalities or change the behavior of a web page. These scripts let you control any aspect of a web page’s design or interaction. For instance, you can add video download functionality to video sharing site like youtube, OR disable all ads on myspace OR change the appearance of gmail and lots lots more… So, how does it work?

Pixiv Translation Plus for Greasemonkey About This is a new version of Pixiv Translation with a focus on adding usability enhancements in addition to updating and maintaining a list of translations. Changelog Version 20130702 (07/02/13) • Fixed menu not opening on Firefox 22 • Added a better method to export custom translations Version 20130418 (04/18/13) • Stop blocking all iframes as ads • Stop using and delete localStorage if GM_setValue is available

"HTTPS, please!" for Greasemonkey Attention, please! There are some small bugs in the current version 0.1.3 which (hopefully) will be fixed in the next version. But the development of "HTTPS, please!" is currently freezed! BookInfoLine. Compare book prices from various book stores. for Greasemonkey Make sure to use latest version of FireFox: Support American Society for the Prevention of Cruelty to Animals (ASPCA) by ordering gifts from amazon: support us: in the UK: