PING (Partimage Is Not Ghost) 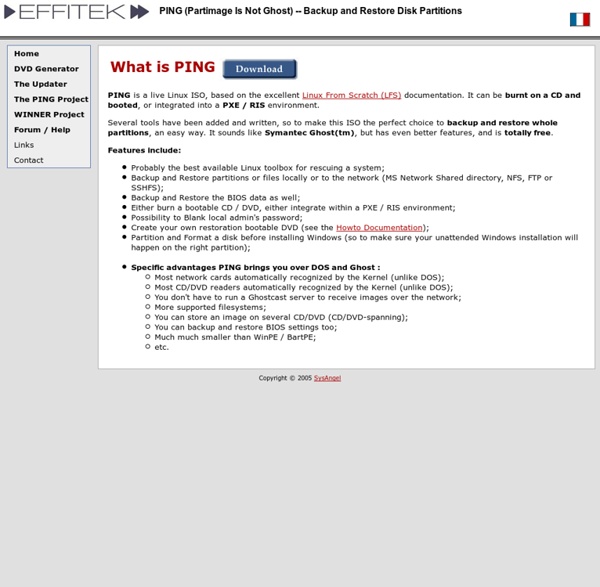 Ultimate Boot CD - Overview Online Storage Services Review 2013 | Best Online File Storage Services | Data Storage - TopTenREVIEWS Web Hosting - Shared cPanel Web Hosting How much disk space and bandwidth will my plan include? There are no set limits on the disk space or data transfer (bandwidth) that we provide in our shared and reseller hosting plans. We want you to have the resources you need to build a great online presence. That being said, we do require all customers to be fully compliant with our Terms of Service and utilize disk space and bandwidth in the normal operation of a personal or small business website. While it is rare, we may need to put constraints on accounts that are using resources that impact other customers on the same server. Typically, customers only run into issues if they use their accounts for storage or file sharing, which is not what our services are intended to support. For Example, customers who are affecting other clients or are using 25% or more of system resources for longer then 90 seconds would be in violation. What happens if I exceed usage?

CHEAP WEB HOSTING SITES • TOP 10 • December 2012 Many websites and blogs will run fine on cheaper web hosting plans. However, when looking for cheap hosting you don't want to find cheap service instead! And of course you still want your obligatory support for PHP & MySQL web scripts. Best web hosting deals for April 20, 2014 Updated daily! Most of the web hosts above will give you a special promo price, either via a coupon or automatically if you sign up through this page. About cheap webhosting... The web hosting plans on this page have been selected for their low cost while still providing good value and service. If you are unsure or just want a shortcut, we recommend you pick InMotion for a business website and iPage for all other situations... If you are already looking into hosting pretty large, complex or multiple sites, your may want to look at the general best hosting list. Hosting offers with details Pages: 1 2 Next» Hosting companies may change their pricing, specs and conditions without notice. Need more?

Free Device Driver Backup and Extraction Utilities The software on this page enable you to copy / backup / extract the device drivers for your Windows system in a form so that you can use them to reinstall your system. This is useful for situations when you have lost your device drivers CD or when you have bought a computer that came with a preloaded system and no device drivers CD. The utilities here allow you to backup your device drivers (particularly the third party drivers, that is, those that did not come from Microsoft) and package them in a form that you can use to load in a Windows system (after, say, you have reinstalled Windows). This page only lists free drivers backup tools. Related Pages Free Device Drivers Backup and Extracting Software Double Driver Double Driver lets you back up and restore your installed Windows device drivers, view a list of all your drivers including details like the version, date, and manufacturer, as well as save or print those driver details. DriverBackup! DriverBackup! DriverMax

Finding Drivers already on hard drive I have a printer that is normally attached to a different computer, running XP, on my home network. My laptop has Windows 7 and has connected to this printer in the past. When I try to add the printer as a network printer, Windows finds it attached to the other computer and tries to find drivers on Windows Update. When it fails, it prompts me to provide the .inf or .in_ files myself. Since I have already used this printer, the appropriate driver must already be on my hard drive somewhere. So here's my question: how can I locate the driver for a Canon ip1600 printer if I know the driver is already on my computer somewhere? There are three reasons I want to do this instead of just find the driver online somewhere. Thanks in advance.

Resolving "Setup did not find any hard disk drives" during Windows XP Installation One of the most popular topics among our readers is installing Windows XP on your new Windows Vista computer – sometimes for compatibility reasons, but also because a lot of people just don’t like Vista very much. The problem that people keep running into left and right is getting to the point where XP starts to install and getting the message “Setup did not find any hard disk drives installed in your computer”. This error happens because your new computer has a storage controller that isn’t supported natively in XP, usually an SATA (Serial ATA) controller. If you don’t have a floppy drive in your computer (who does anymore), then you’ll need to use a process called slip-streaming to integrate the storage drivers into your XP installation CD. It should go without saying that this is an advanced topic, so proceed with caution. Creating a Custom XP Install We’ll use a software called nLite to create a new XP install cd, so you’ll first need to download and install it. Finding Drivers for XP

Free Hard Disk Backup and Restore, Hard Disk Image and Cloning Utilities The hard disk and partition imaging software take a snapshot of your hard disk so that you can restore your system at a later time to the exact same state the system was when you imaged the disk or partition. This is useful for system recovery in case of a hard disk disaster. The term "image" is used because such software often copy the state of the hard disk sector by sector to your image. Hence if your hard disk was (say) defragmented with certain software occupying certain sectors when you backed up, it will be returned to that same state when you restore your backup. The image utilities often do not allow fine control what you backup - you can specify the partitions or hard disks to back up, but you usually will not be able to specify which folders to exclude or include. They are useful for backing up your system drive or partition, that is, the drive that you placed your operating system on. ODIN - Open Disk Imager for Windows Macrium Reflect Free Clone Maxx Dubaron DiskImage NFGDump