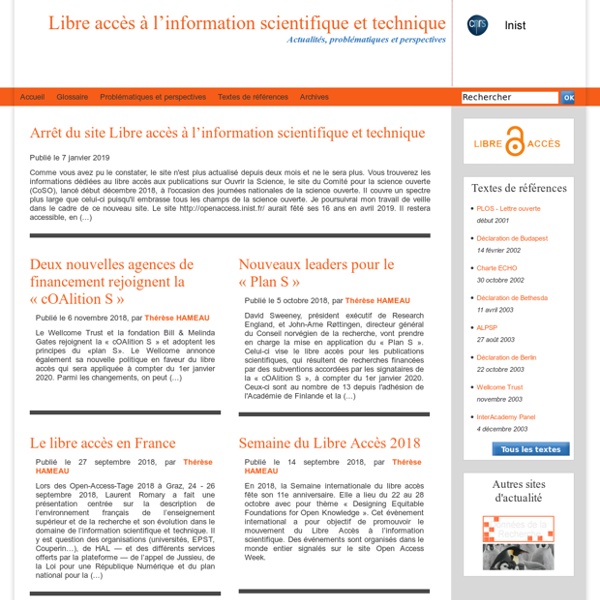 OAIster [OCLC - Digital Collection Services] Access to OAIster A freely-accessible site for searching only OAIster records is available at Additionally, OAIster records are fully accessible through WorldCat.org, and will be included in WorldCat.org search results along with records from thousands of libraries worldwide. They will also continue to be available on the OCLC FirstSearch service to Base Package subscribers, providing another valuable access point for this rich database and a complement to other FirstSearch databases. Contributing to OAIster OAIster continues to grow and expand.

FAQ: DOI display guidelines Frequently asked questions about Crossref's DOI Display Guidelines: Should the new format be used on Crossref DOI response pages? Doing so results in a self-referencing link back to the page the reader is already on. Should we just display the DOI URL without making it a link?

Data Theft: Hackers Attack We are constantly warned to protect our passwords, Social Security numbers and other “personal identifying information” to thwart thieves who may steal laptops or perpetrate online fraud. Although such breaches have soared since 2005 (right) as criminals try to commit identity theft, the truly enormous breaches (bottom) have increasingly been carried out by “hacktivists”—individuals or groups who are angry about an organization’s actions. Hackers, for example, exposed data about 77 million Sony customers after the company pursued legal action against other hackers. “More than 107 million people were affected by hacking during the first half of 2011,” says Jake Kouns, CEO of the Open Security Foundation in Glen Allen, Va., which runs the Data­LossDB project (the data source for graphics on this page). Will you be informed if your data are exposed? Maybe not.

Open access Open access logo, originally designed by Public Library of Science. Whilst no official open access logo exists, organisations are free to select the logo style that best supports their visual language. Other logos are also in use. 9-minute video explaining open access Open access (OA) refers to online research outputs that are free of all restrictions on access (e.g. access tolls) and free of many restrictions on use (e.g. certain copyright and license restrictions).[1] Open access can be applied to all forms of published research output, including peer-reviewed and non peer-reviewed academic journal articles, conference papers, theses,[2] book chapters,[1] and monographs.[3] Definitions[edit]

Implements Policy to Make Research Papers Freely Accessible to Public The UCSF Academic Senate has voted to make electronic versions of current and future scientific articles freely available to the public, helping to reverse decades of practice on the part of medical and scientific journal publishers to restrict access to research results. The unanimous vote of the faculty senate makes UCSF the largest scientific institution in the nation to adopt an open-access policy and among the first public universities to do so. Richard A. Open Data Study – New Technologies Political power, information and rights issues have been energised in the US and UK by the pioneering introduction of open data. Making information about services, education and other data has been made publicly available on the web in both countries to help improve services and contribute to future economic growth. But can this approach be replicated to support progress in middle-income and developing countries?

Digital Science adopts Relative Citation Ratio Digital Science is to adopt the National Institutes of Health (NiH) new article level metric of scientific influence – the Relative Citation Ratio, (RCR). The US biomedical funding agency has introduced the new metric to evaluate funded medical and academic research, to provide an improved indicator on the relative citation strength of a given paper, field-normalised and benchmarked against its peers. ÜberResearch, a portfolio company of Digital Science, has been analysing the use of the newly generated metric and, following an overwhelmingly positive response from client testing, will begin to make these data available to a much larger constituency in the academic research, publishing, and science funding communities via Digital Science’s portfolio companies from July 2016. This adoption will include access to the RCR for users of products from:

The Use of Pastebin Pastebin is a popular website for storing and sharing text. Though it’s mostly used for distributing legitimate data, it seems to be frequently used as a public repository of stolen information, such as network configuration details and authentication records. Various hacker groups and individuals seem to be using Pastebin to distribute their loot; the highest-profile publisher in the recent weeks was LulzSec. What’s Popular on Pastebin To get a taste for the kind of information available on Pastebin, take a look at its Trending Pastes page. The most popular pages at this moment include gems such as: