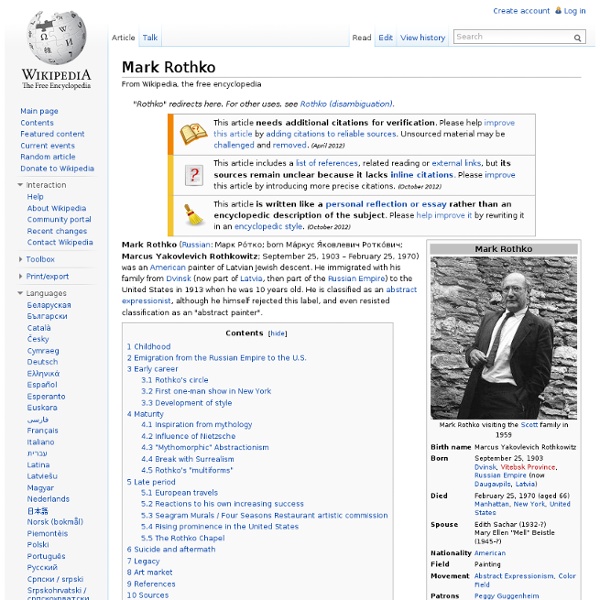 Mark Rothko (Latvian: Markus Rotkovičs, Russian: Марк Ро́тко; born Ма́ркус Я́ковлевич Ротко́вич; Marcus Yakovlevich Rothkowitz; September 25, 1903 – February 25, 1970) was an American painter of Russian Jewish descent. He is generally identified as an Abstract Expressionist, although he himself rejected this label and even resisted classification as an "abstract painter." With Jackson Pollock and Willem de Kooning, he is one of the most famous postwar American artists. Childhood[edit] Mark Rothko was born in Dvinsk, Vitebsk Governorate, in the Russian Empire (today Daugavpils in Latvia). Despite Jacob Rothkowitz's modest income, the family was highly educated ("We were a reading family," Rothko's sister recalled[2]), and Rothko was able to speak Russian, Yiddish, and Hebrew. Emigration from Russia to the U.S. Fearing that his sons were about to be drafted into the Imperial Russian Army, Jacob Rothkowitz emigrated from Russia to the United States. Rothko received a scholarship to Yale. Related:  Artists

Jean Arp Jean Arp / Hans Arp (16 September 1886 – 7 June 1966) was a German-French, or Alsatian, sculptor, painter, poet and abstract artist in other media such as torn and pasted paper. When Arp spoke in German he referred to himself as "Hans", and when he spoke in French he referred to himself as "Jean". Many people believe that he was born Hans and later changed his name to Jean, but this is not the case. Early life[edit] Arp was born in Strasbourg as the son of a French mother and a German father, during the period following the Franco-Prussian War when the area was known as Alsace-Lorraine (Elsass-Lothringen in German) after France had ceded it to Germany in 1871. Following the return of Alsace to France at the end of World War I, French law determined that his name become Jean. In 1904, after leaving the École des Arts et Métiers in Strasbourg, he went to Paris where he published his poetry for the first time. Career[edit] Arp was a founding member of the Dada movement in Zürich in 1916.

Hart Crane Life and work[edit] Hart Crane was born in Garrettsville, Ohio. His father, Clarence, was a successful Ohio businessman who invented the Life Savers candy and held the patent, but sold it for $2,900 before the brand became popular.[4] He made other candy and accumulated a fortune from the candy business with chocolate bars. Crane's mother and father were constantly fighting, and early in April, 1917, they divorced. I am not ready for repentance; Nor to match regrets. Excerpted from "Legend" published in White Buildings (1926)[5] Career[edit] Crane returned to New York in 1928, living with friends and taking temporary jobs as a copywriter or living off unemployment and the charity of friends and his father. Just imagine looking out your window directly on the East River with nothing intervening between your view of the Statue of Liberty, way down the harbour, and the marvelous beauty of Brooklyn Bridge close above you on your right! Death[edit] Poetics[edit] [edit] Difficulty[edit]

Hairy Who Jim Nutt briefly attends college at the University of Kansas, then the University of Pennsylvania, then Washington University in St. Louis. He eventually settles on the School of the Art Institute of Chicago (SAIC), where he meets his future wife, Gladys Nilsson. Magazyn sztuki - Malarstwo i malarze - Nurty w malarstwie - Encyklopedia malarstwa Joan Miró Earning international acclaim, his work has been interpreted as Surrealism, a sandbox for the subconscious mind, a re-creation of the childlike, and a manifestation of Catalan pride. In numerous interviews dating from the 1930s onwards, Miró expressed contempt for conventional painting methods as a way of supporting bourgeois society, and famously declared an "assassination of painting" in favour of upsetting the visual elements of established painting.[1] Biography[edit] Born into the families of a goldsmith and a watch-maker, he grew up in the Barri Gòtic neighborhood of Barcelona.[2] His father was Miquel Miró Adzerias and his mother was Dolors Ferrà.[3] He began drawing classes at the age of seven at a private school at Carrer del Regomir 13, a medieval mansion. Career[edit] Illustration for Cavall Fort, a children's magazine in Catalan Miró initially went to business school as well as art school. In 1924, Miró joined the Surrealist group. Late life and death[edit] Works[edit]

Arshile Gorky Armenian-American painter Arshile Gorky (; born Vostanik Manoug Adoian, Armenian: Ոստանիկ Մանուկ Ատոյեան; April 15, 1904 – July 21, 1948) was an Armenian-American painter who had a seminal influence on Abstract Expressionism. He spent most his life as a national of the United States. Along with Mark Rothko, Jackson Pollock and Willem de Kooning, Gorky has been hailed as one of the most powerful American painters of the 20th century. Early life[edit] Gorky was born in the village of Khorgom (today's Dilkaya), situated on the shores of Lake Van in the Ottoman Empire.[1] His date of birth is often stated as April 15, 1904; however, the year might well be 1902 or 1903.[2] In later years he was vague about his date of birth, changing it from year to year. In 1915, Gorky fled Lake Van during the Armenian Genocide and escaped with his mother and his three sisters into Russian-controlled territory. Career[edit] Arshile Gorky's Portrait of Master Bill, 1929–1936. Personal life[edit] Legacy[edit]

Élisabeth Vigée Le Brun 18th and 19th-century French painter Élisabeth Louise Vigée Le Brun (also spelt Vigée-Lebrun; French pronunciation: ​[elizabɛt lwiz viʒe ləbʁœ̃]; 16 April 1755 – 30 March 1842),[1] also known as Madame Le Brun, was a prominent French portrait painter of the late 18th century. Her artistic style is generally considered part of the aftermath of Rococo with elements of an adopted Neoclassical style.[2] Her subject matter and color palette can be classified as Rococo, but her style is aligned with the emergence of Neoclassicism. Vigée Le Brun created a name for herself in Ancien Régime society by serving as the portrait painter to Marie Antoinette. She enjoyed the patronage of European aristocrats, actors, and writers, and was elected to art academies in ten cities.[3] Biography[edit] Self-Portrait with Her Daughter Julie, 1786 Early life[edit] On 12 February 1780, Vigée-Le Brun gave birth to a daughter, Jeanne Lucie Louise, whom she called Julie and nicknamed "Brunette Marie Antoinette[edit]