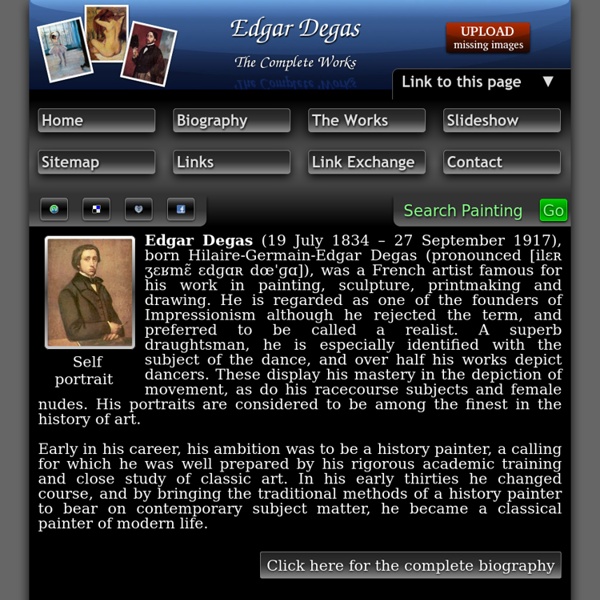 Pierre Auguste Renoir - The complete works The Seven Works of Mercy (Caravaggio) The Seven Works of Mercy (Italian: Sette opere di Misericordia), also known as The Seven Acts of Mercy, is an oil painting by Italian painter Caravaggio, circa 1607. The painting depicts the seven corporal works of mercy in traditional Catholic belief, which are a set of compassionate acts concerning the material welfare of others. The painting was made for, and is still housed in, the church of Pio Monte della Misericordia in Naples. The titular seven works/acts of mercy are represented in the painting as follows: Bury the dead In the background, two men carry a dead man (of whom only the feet are visible). Visit the imprisoned, and feed the hungry On the right, a woman visits an imprisoned man and gives him milk from her breast. Shelter the homeless A pilgrim (third from left, as identified by the shell in his hat) asks an innkeeper (at far left) for shelter. Clothe the naked St. Visit the sick St. Refresh the thirsty Samson (second from the left) drinks water from the jawbone of an ass.

The Slow Movement: Making a Connection Impressionism Movement, Artists and Major Works | The Art Story "Impressionism is only direct sensation. All great painters were less or more impressionists. It is mainly a question of instinct." Impressionism can be considered the first distinctly modern movement in painting. Impressionism was a style of representational art that did not necessarily rely on realistic depictions. The Impressionists loosened their brushwork and lightened their palettes to include pure, intense colors. Impressionism records the effects of the massive mid-nineteenth-century renovation of Paris led by civic planner Georges-Eugène Haussmann, which included the city's newly constructed railway stations; wide, tree-lined boulevards that replaced the formerly narrow, crowded streets; and large, deluxe apartment buildings. Subscribe to Share on Facebook Share on Twitter Welcome to The Art Story! Error occured while saving data... Like The Art Story Foundation on Facebook Impressionism Beginnings Exhibitions in Paris and The Salon des Refusés Salon des Artistes Indépendants

Celebrating Caravaggio: First Of The Bad-Boy Artists The Imagination Factory Renoir Large Bathers - Essays - Marissa4Hill Renoir’s Large Bathers As a student in a suburb of Philadelphia, I have had the opportunity to visit the Philadelphia Museum of Art on multiple occasions over the last two and a half years. On some visits, I spend my time staring at Van Gogh’s Sunflowers while other times I dedicate my time to admiring the Sculpture Garden; but one thing that stays the same through every visit is my shameless staring, dare I say gawking, at Pierre-Auguste Renoir’s Large Bathers. This 1887 oil on canvas is the epitome of late 19th century European art, combining aspects of mid-19th century Impressionism, the frivolity of 18th century Rococo, and Classical nudes. Though I cannot quite place my finger on what draws me to this piece, I do know that the cheerful pastels, sensual lines, and lighthearted subject make Large Bathers one of the top paintings I have had the pleasure of viewing. The paintings of Renoir (1841-1919) are commonly known for their strong lines and bold color palette.

"Dear Mr. Rockwell: You painted one of my sons black." From the Norman Rockwell fan mail archive: “Dear Mr. Rockwell, Let me start this letter by telling you that I am the mother of two of the boys that posed for the 1974 Boy Scout Calendar. “This is a very difficult letter to write as my boys happen to be twins and you painted one of them ‘black.’ Of course, they are both ‘white.’ “The boys have been eagerly awaiting the calendars and so have all our friends. “I realize nothing can be done now but maybe you could write Steve (the one you painted black) a little note of apology so he’ll know it was a mistake. “The twins never even cashed your check as they are saving them as a souvenir of the day they posed for you. “Mr. Yours sincerely, Jennie Negron” For the 1975 calendar, Norman Rockwell cast an African-American young man for the role.

National Gallery of Art | NGAkids home page NGAkids CD ROMs Eight new NGAkids CD-ROMs are available through the Gallery's LEARNING RESOURCES portal. If you are having compatibility issues or if you prefer using our art activities offline, we invite you to register and borrow these free CDs. What's Happening? Download the calendar (PDF, 267k) or visit the Family Activities page on our Web site for more information about upcoming programs. Parents and teachers may wish to sign up for the mailing list or consult the Gallery's online Calendar of Events. For up-to-date information on the current month’s films, please call the Children’s Film Program information line at (202) 789-3030 or read this list of scheduled Children's Film. Here is an up-to-date list of Current Exhibitions. Searching for something? If you're looking for information about specific artists or works of art that are not mentioned in NGAkids, just search the collection. You can learn about the history of the National Gallery of Art. Inside Scoop on Jan Steen (PDF, 347k)