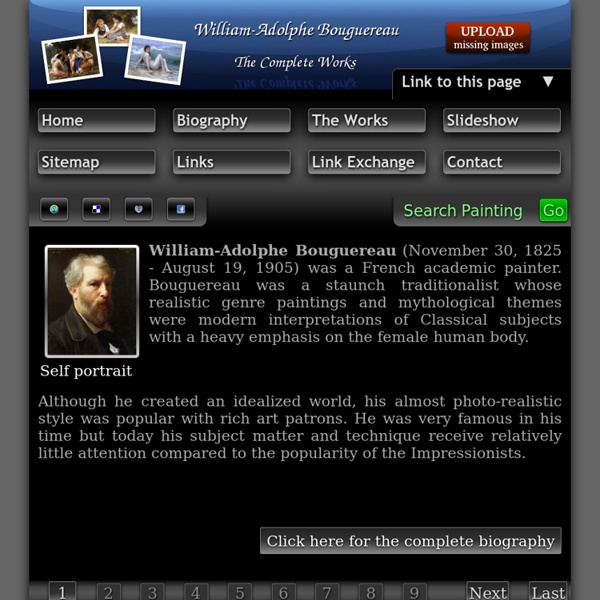 Peter Paul Rubens - The complete works Michelangelo Poems, Poems by Michelangelo | Michelangelo Gallery Michelangelo•Poems Many people don’t realize that beyond being a sculptor and painter Michelangelo was also a poet. Though Michelangelo took great pride in his artwork he had a much more humble view of his poetry calling it, “something foolish”. CELESTIAL LOVE by: Michelangelo Buonarroti (1475-1564) No mortal thing enthralled these longing eyes When perfect peace in thy fair face I found; But far within, where all is holy ground, My soul felt Love, her comrade of the skies: For she was born with God in Paradise; Nor all the shows of beauty shed around This fair false world her wings to earth have bound: Unto the Love of Loves aloft she flies. DANTE by: Michelangelo Buonarroti (1475-1564) What should be said of him cannot be said; By too great splendor is his name attended; To blame is easier than those who him offended, Than reach the faintest glory round him shed.

Jean Fautrier | artnet Biography Jean Fautrier was a French painter and sculptor best known for his involvement in the Art Informel group. Fautrier’s works evolved from brooding yet naturalistic figure paintings to almost wholly abstract gestures and shapes. Born on May 16, 1898 in Paris, France, Fautrier moved to London with his mother. He later attended both the Royal Academy of Arts and the Slade School, but found both stifling and academic. Rackham Fairy and Fairy Tale Art (Arthur Rackham) Michelangelo Sculptures, David, Pieta | Michelangelo Gallery Michelangelo•Sculptures Click here for the Gallery of Michelangelo Sculptures Michelangelo is one of the most famous sculptors in the history of art. He trained as a fresco painter yet most of his early works were sculptural. imprisoned in the stone and reveal it. Michelangelo’s passion for sculpture sent him year after year to the town of Cararra, Italy where stone quarries are known for their pure white blocks of marble. One of his most famous sculptures, the Pieta was carved in Rome between 1497 and 1500 before Michelangelo was 25 years old. Michelangelo’s most famous sculptural work, David, was completed in 1504. Michelangelo’s last major sculpture was Moses, carved for the tomb of Pope Julius II. Read more about some of Michelangelo's Famous Sculptures: David Pieta Moses Michelangelo’s sculptures are still popular today. Visit Michelangelo Share Michelangelo Other Great Masters Michelangelo Prints > Testa Femminile di Profilo Portrait of Andrea Quaratesi Study of a Head Ideal Head of a Warrior

Duane Hanson | artnet Biography Duane Hanson was an American sculptor known for his hyper-realistic depictions of ordinary people. Using polyester resin, Bondo, bronze, or fiberglass, Hanson’s technique involved casting living people and then painstakingly painting the fiberglass figure with all the imperfections and veins of actual skin. “My art is not about fooling people,” the artist explained. “It's the human attitudes I'm after—fatigue, a bit of frustration, rejection. To me, there is a kind of beauty in all this.”

Irish Art Archive - William John Hennessy - Milmo-Penny Fine Art Hennessy spent the summer months in Normandy where he had a residence close to the port of Honfleur. A school of painting, based in Saint Siméon’s Inn, was already well established there. Corot, Isabey and Huet were amongst the first painters of the group. Boudin, who was born there, invited Courbet, Jongkind and Monet to join them. It was at this time that Boudin encouraged Monet to paint in the open air and it was this activity that led to the advent of Impressionism. Hennessy might have had this in mind when he painted An Impressionist at Work; Scene in a Normandy Cider Orchard, which he sent to the Royal Academy in 1881. Scenes set in cider orchards recur many times in Hennessy’s work. The apples are shaken from the tree by a man with a long pole.

Portfolio >> Lord Frederic Leighton Frederic Leighton, 1st Baron Leighton PRA (3 December 1830 – 25 January 1896), known as Sir Frederic Leighton, Bt, between 1886 and 1896, was an English painter and sculptor. His works depicted historical, biblical and classical subject matter. Leighton was bearer of the shortest-lived peerage in history; after only one day his hereditary peerage became extinct. Leighton was born in Scarborough to a family in the import and export business. In 1860, he moved to London, where he associated with the Pre-Raphaelites. Leighton was knighted at Windsor in 1878, and was created a Baronet, of Holland Park Road in the Parish of St Mary Abbots, Kensington, in the County of Middlesex, eight years later. As he was unmarried, after his death his Barony was extinguished after existing for only a day; this is a record in the Peerage.

Kees van Dongen | artnet Biography Kees van Dongen was a Dutch painter known for his distinctive Fauvist portraits characterized by their bold palettes and his subject’s large, almond-shaped eyes. Part of the avant-garde movement that included Henri Matisse, Maurice de Vlaminck, and André Derain, van Dongen employed aggressively clashing colors to paint sensuous and even garish representations of the fashionable French bourgeoisie, and the wealth that permitted their leisurely lifestyle. Born Cornelis Theodorus Maria van Dongen on January 26, 1877 in Rotterdam, the Netherlands, the artist’s flagrant use of color and expressive line became his signature style, and inspiration gained from international travel set him apart from his peers—the French artists he exhibited with while living in Paris during the early part of the 20th century. In 1926, van Dongen was inducted into the French Legion of Honor, and, in 1927, awarded the Order of the Crown of Belgium.

John Bauer Art: Trolls, Fairy Tales and Folk Tales - Swedish (1882 - 1918) Frederic Lord Leighton British, 1830 - 1896 44 pictures Click image to learn more about each picture, or send as a free e-card The acknowledged leader of the Victorian classical school of painting, Frederic Leighton was born in Scarborough, the son of a doctor. His grandfather, Sir James Leighton, was court physician to Czar Alexander I of Russia; and Sir James' son was also a doctor. Unlike most major artists of the nineteenth century Leighton did not study at the Royal Academy Schools, but received his training in Brussels, Paris and Frankfurt. On his return to England in 1855, his historical painting Cimabue's Madonna Carried in Procession through the Streets of Florence was shown at the Royal Academy, where it received a rapturous reception from the critics and was later bought by Queen Victoria. Leighton settled in London in 1860 and was made an RA in 1868, when he turned to painting subjects from mythology. Leighton suddenly found himself the centre of attention, with his paintings the talk of London.

Erró | Icelandic Art Center Guðmundur Guðmundsson (b. 1932), better known as Erró, is without a doubt the best known contemporary artist of Iceland. After studying in Iceland, at the age of 20 he was admitted to the Oslo Academy of Fine Art, Norway. In 1954 he studied at the Florence Academy of Art and later in Ravenna, Italy, where he focussed on mosaic technique. In 1958 he moved to Paris in 1958, where was accepted by the local Surrealists with open arms. In 1989 Erró gave the City of Reykjavík a large collection of his works, a total of about 2,000 items, including paintings, watercolours, graphic art, sculptures, collages and other works spanning the artist’s entire career from his youth. Exhibitions from the Erró collection are a regular fixture at the Hafnarhús site of the Reykjavík Art Museum, with the purpose of giving as clear an image as possible of the diverse character of the artist’s works.