Guesstimate. And Counter-Intuitive Response. "Now think of yourself as a battery. 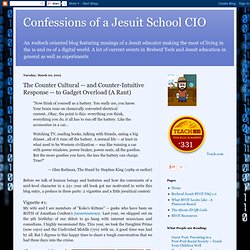 You really are, you know. Your brain runs on chemically converted electrical current...Okay, the point is this: everything you think, everything you do, it all has to run off the battery. Like the accessories in a car... Watching TV, reading books, talking with friends, eating a big dinner...all of it runs off the battery. A normal life -- at least in what used to be Western civilization -- was like running a car with power windows, power brakes, power seats, all the goodies. -- Glen Redman, The Stand by Stephen King (1989 or earlier) EducatorStudio : Wise Words: A weekly dose of... Shall we play a game (part III) - Demographics and Hidden Curriculum. In the first part of the series we explored Game Goals and how they influence the educational impact. today, there is probably about one more post in this series, namely because I am hoping to share feedback that I have received from teachers and gamers about the series so far, but it may take a back seat to my need to rant about PARCC tech requirements soon. 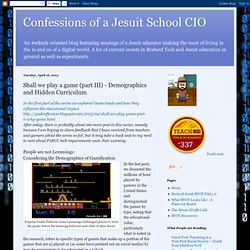 Fair warning. People are not Lemmings: Considering the Demographics of Gamification In the last post, we dissected the millions of hour played by gamers in the United States and distinguished the games by type, noting that the educational value, particularly what is noted in the research, refers to specific types of games that make up a portion of the games that are a) played or (as some have pointed out on social media) b) may be appropriate to be advocated in a school. Additionally, there is a lot of data being collected about how different types of games appeal to different people. Shall we play a game (part III) - Demographics and Hidden Curriculum. YouTube Video Add-in. Shall We Play A Game? part II - Why Game Mechanics Matters. Wow. 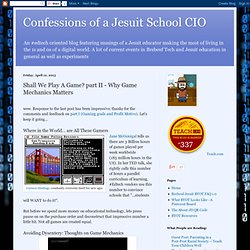 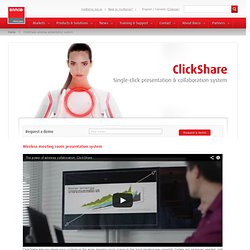 A Gamer's Initial Thoughts on #edtech Gamification. 10 rules for a successful edtech program that have little to do with tech, part 1. Apr 1 Written by: 4/1/2013 7:03 AM By JD Ferries-Rowe, CIO Advisor 1. 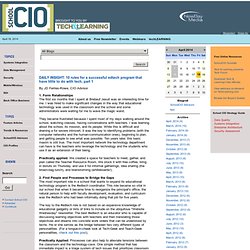 Form Relationships. When it is OK to say "NO" - An Twitter-based #edtech Reflection about IWBs. Today's post comes out of a conversation that happened out of a twitter chat that caused me to do a lot of reflection on whether or not my responses were a) appropriate or b) contradictory to many of the "Rules" that I laid out in my post from a few weeks ago (note: "10 Rules for a Successful #Edtech Department that have Little to do with Technology"is now the 3rd most popular post on this blog all-time -- thx) Context: How Twitter Got me to this Topic The premise put forth by @edtechempowers (Educational Researcher in Canada and great conversationalist), originally posted this comment: Through the course of our conversation, it became apparent, that while he and I agreed about a number of things in the use of technology and the running of an IT department, he had little context for a technology department that is build around student learning, school mission, and teacher support. 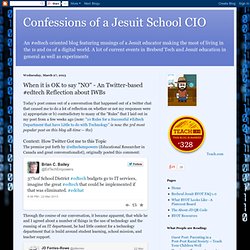 Jdferries : BAT-Monkey is Ready to chalk... Answering "What's Next?" - Classroom Technology Beyond BYOT (with pictures and bullet-points) One of the problems with pulling off an important (if small) Educational Technology revolution is the inevitable questions from excited faculty, students, and trustees: "What's Next? 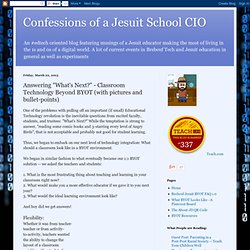 " While the temptation is strong to answer, "reading some comic books and 3-starring every level of Angry Birds", that is not acceptable and probably not good for student learning. SAMR Model - Technology Is Learning. On Security Awareness Training. The focus on training obscures the failures of security design Should companies spend money on security awareness training for their employees? 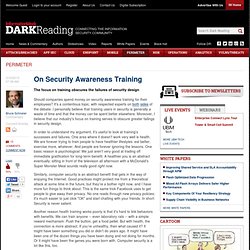 It's a contentious topic, with respected experts on both sides of the debate. I personally believe that training users in security is generally a waste of time and that the money can be spent better elsewhere. Moreover, I believe that our industry's focus on training serves to obscure greater failings in security design. In order to understand my argument, it's useful to look at training's successes and failures. Similarly, computer security is an abstract benefit that gets in the way of enjoying the Internet. Another reason health training works poorly is that it’s hard to link behaviors with benefits.

Training laypeople in pharmacology also isn't very effective. Gadget talk: A Windows 8 Tablet Review - an #edtech perspective. One of the basic things that the IT department has to do at our school is play with toys (yay!). 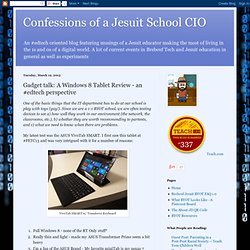 Since we are a 1:1 BYOT school, we are often testing devices to see a) how well they work in our environment (the network, the classrooms, etc.), b) whether they are worth recommending to partents, and c) what we need to know when there are problems. My latest test was the ASUS VivoTab SMART. I first saw this tablet at #FETC13 and was very intrigued with it for a number of reasons: Full Windows 8 - none of the RT Only stuff*Really thin and light - made my ASUS Transformer Prime seem a bit heavyI'm a fan of the ASUS Brand - My favorite miniTab is my nexus 7 (which i carry around regularly despite having a Galaxy Note "phablet") and the aforementioned Transformer Prime (which i dutifully carried around before realizing that I only used it to read comic books).The 64gb version of the tablet comes in under 500 dollars. the Transleeve keyboard and cover add an additional $125. 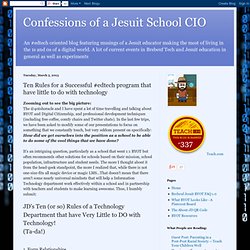 In the last few trips, we have been asked to modify some of our presentations to focus on something that we constantly touch, but very seldom present on specifically: How did we get ourselves into the position as a school to be able to do some of the cool things that we have done? It's an intriguing question, particularly as a school that went 1:1 BYOT but often recommends other solutions for schools based on their mission, school population, infrastructure and student needs.

JD's Ten (or so) Rules of a Technology Department that have Very Little to DO with Technology! (Ta-da!) 1. The six months that I spent at Brebeuf Jesuit was an interesting time for me. 2. 3. 14 février 2013. 40ishoracle: Two tech types sit at an... Jdferries : Anyone else think the Pearson... Jdferries : How many #edtech s does it... Create, edit and present with Google Slides offline.

Consortium Releases Technology Guidelines for Common-Core Tests - Digital Education. What a Difference a Semester Makes. All your BYOTChat are belong to JD. This cheesy Kevin Costner flick that tends to make all humans with a Y-chromosome weep like children has this great line in it: "I believe Lee Harvey Oswald acted alone. I believe there ought to be a constitutional amendment outlawing Astroturf and the designated hitter.

" Whoops. Wrong one. I meant:"If you build it, [they] will come"During the movie, most people focus on the "...He will come" part, what with the ghostly baseball players and unresolved daddy issues. BYOT 101 - A Photo Series. The @40ishoracle and I have been discussing our lack of postings recently. Its not that we don't have a lot to say but that we have been exhausted by two months of traveling. As we recuperate, we have been talking a lot about operating our of a sense of mission instead of a sense of fear (more on that later). but... Sometimes, you just want to confront those fears head-on. Jdferries : BYOT 101: The Photobooth posture... Jdferries : BYOT101 - A Photo Series...

So what's next? Aug 21. The eText Conundrum - A BYOT Fiasco Resolved Over 6 Days, Part I. Let me preface this rant (and oh, there will be ranting) with the following disclaimer: I don't really believe any of the actors in this situation are evil. Developing Critical Thinking Skills...By Being Flexible. Way back, when we started this whole movement toward student choice of Bring Your Own Technology we articulated the program objective:The key to BYOT is choice… allowing students to access tools, evaluate their usage for the learning need and use the tool successfully.Funny thing about choice...

The ChallengeI've been in correspondence with ed tech colleagues throughout the US. 26 Internet safety talking points. The Standard for Influence. BYOT DayByDay 4&5: Vignettes over Two Days. BYOT DayByDay 3: Getting Lost in the Details and an iOS rant. BYOT DayByDay 2: High-Tech, High Teach. BYOT DayByDay 1: Let the games begin! (and knock on some wood) So, I want to gratuitously steal this analogy from @40ishoracle, because it is too perfect for the description.

Introducing Infographics - Make It About Them. Confessions of a Jesuit School CIO. Ed Tech Lingo Bingo 2012. Dear EdTech Entrepreneurs… To the Clouds! - An Educator's Guide to the New G-drive and Associated Apps. Google Plus Hangouts on Air feature now available to all users. An international forum for all schools seeking to make the best use of BYOT. 7 New Educational Startups Founded By Minorities in Tech. Integrating Technology: Avoid Being Derailed by the Details. The Vendor Corollary to Lord-of-the-Flies: an open letter to edtech companies on Twitter. Manual.