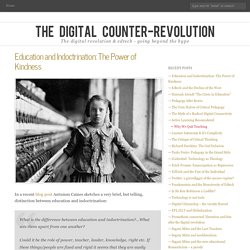 …What sets them apart from one another? Active learning and the passivity of education at its best. 1. 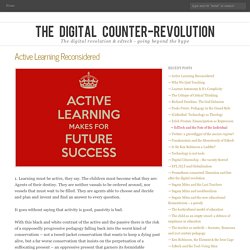 Learning must be active, they say. The children must become what they are: Agents of their destiny. They are neither vassals to be ordered around, nor vessels that must wait to be filled. They are agents able to choose and decide and plan and invent and find an answer to every question. Why We Quit Teaching. The reader who respects the right of the bomb victim not to have the graphic photo of his dismembered body displayed onscreen will forgive us for presenting a very selective account of our reasons for leaving the teaching profession. 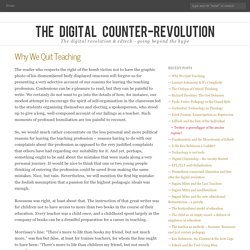 Confessions can be a pleasure to read, but they can be painful to write. We certainly do not want to go into the details of how, for instance, our modest attempt to encourage the spirit of self-organisation in the classroom led to the students organising themselves and electing a spokesperson, who stood up to give a long, well-composed account of our failings as a teacher. Such moments of profound humiliation are too painful to recount. Learner Autonomy & It's Complicity. Tweetable abstract: In its current form, the promotion of freedom in education is, at the same time, the promotion of its opposite. 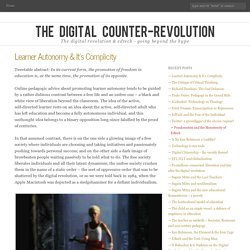 Online pedagogic advice about promoting learner autonomy tends to be guided by a rather dubious contrast between a free life and an unfree one – a black and white view of liberation beyond the classroom. The idea of the active, self-directed learner rests on an idea about the active, self-directed adult who has left education and become a fully autonomous individual, and this unthought idea belongs to a binary opposition long-since falsified by the proof of centuries. In that assumed contrast, there is on the one side a glowing image of a free society where individuals are choosing and taking initiatives and passionately pushing towards personal success; and on the other side a dark image of browbeaten people waiting passively to be told what to do. Freedom and unfreedom: the received ideas The unfreedom of the free. Critical Thinking - a Critique. In promoting the value of critical thinking people too often forget that critical thinking is itself something that needs to be thought about critically. 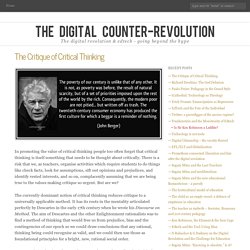 There is a risk that we, as teachers, organise activities which require students to do things like check facts, look for assumptions, sift out opinions and prejudices, and identify vested interests, and so on, complacently assuming that we are being true to the values making critique so urgent. But are we? The currently dominant notion of critical thinking reduces critique to a universally applicable method. It has its roots in the mentality articulated perfectly by Descartes in the early 17th century when he wrote his Discourse on Method. Paulo Freire: Pedagogy of the Oppressed.

Paulo Freire’s Pedagogy of the Oppressed remains an inspiring work. 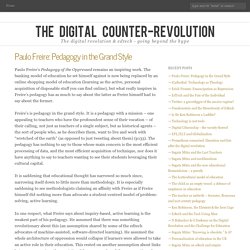 The banking model of education he set himself against is now being replaced by an online shopping model of education (learning as the active, personal acquisition of disposable stuff you can find online), but what really inspires in Freire’s pedagogy has as much to say about the latter as Freire himself had to say about the former. Freire’s is pedagogy in the grand style. It is a pedagogy with a mission – one appealing to teachers who have the profoundest sense of their vocation – of their calling, not just as teachers of a single subject, but as historical agents – the sort of people who, as he describes them, want to live and work with “wretched of the earth” (as opposed to just tweeting about them) (p133).

EdTech and the Fate of the Individual. The EdTech discourse still hasn’t faced up to the demise of the individual. 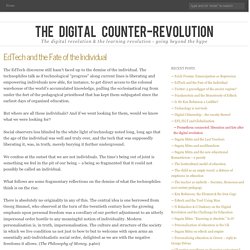 The technophiles talk as if technological “progress” along current lines is liberating and empowering individuals now able, for instance, to get direct access to the colossal warehouse of the world’s accumulated knowledge, pulling the ecclesiastical rug from under the feet of the pedagogical priesthood that has kept them subjugated since the earliest days of organised education. But where are all these individuals? And if we went looking for them, would we know what we were looking for?

Social observers less blinded by the white light of technology noted long, long ago that the age of the individual was well and truly over, and the tech that was supposedly liberating it, was, in truth, merely burying it further underground. ELT Nick. Frankenstein and the Monstrosity of Edtech. The novel Frankenstein by Mary Shelley is a meditation on monstrosity in various forms. 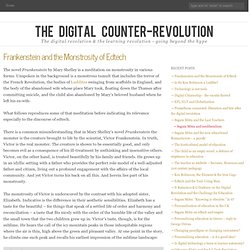 Unspoken in the background is a monstrous tumult that includes the terror of the French Revolution, the bodies of Luddites swinging from scaffolds in England, and the body of the abandoned wife whose place Mary took, floating down the Thames after committing suicide, and the child also abandoned by Mary’s beloved husband when he left his ex-wife. What follows reproduces some of that meditation before indicating its relevance especially to the discourse of edtech. Sir Ken Robinson and the Luddites on industry and factory-model schools. Sir Ken Robinson has something of the Luddite* about him. 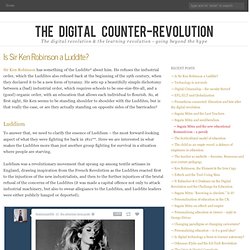 He refuses the industrial order, which the Luddites also refused back at the beginning of the 19th century, when they declared it to be a new form of tyranny. He sets up a beautifully simple dichotomy between a (bad) industrial order, which requires schools to be one-size-fits-all, and a (good) organic order, with an education that allows each individual to flourish. So, at first sight, Sir Ken seems to be standing shoulder to shoulder with the Luddites, but is that really the case, or are they actually standing on opposite sides of the barricades?

Luddism. Toward a Luddite Pedagogy. An especially objectionable feature of the edtech discourse is its use of the word “Luddite” as a term of abuse. 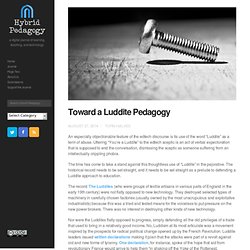 Uttering “You’re a Luddite” to the edtech sceptic is an act of verbal expectoration that is supposed to end the conversation, dismissing the sceptic as someone suffering from an intellectually crippling phobia. The time has come to take a stand against this thoughtless use of “Luddite” in the pejorative. The historical record needs to be set straight, and it needs to be set straight as a prelude to defending a Luddite approach to education. The record: The Luddites (who were groups of textile artisans in various parts of England in the early 19th century) were not flatly opposed to new technology. Technology is not tools. When #edtech sceptics and technophiles start discussing their digital bone of contention the sceptics know that sooner or later someone from the latter camp will come out with: “But tech is just tools – neither bad nor good; what matters is the way we use them.”

And this is supposed to end the debate, pulling the discursive rug entirely from under the sceptic, because there is nothing to make a big fuss over and get dystopian about if the tech is just tools – neutral bits of hardware whose significance rests entirely on how individuals choose to use them. But does the debate end there? Digital citizenship in education - a critique of an edtech myth. Are lessons in digital citizenship a good thing? Surely when it comes to digital citizenship there is something that even Luddite-sympathising, politically-minded #edtech sceptics can affirm. There is something here to be positive about, isn’t there? Well, yes and no.

EFL/ELT and Globalization. Tweet-length abstract: EFL teachers, who love the foreign, find themselves part of a process threatening it with extinction. Question for teachers of English as a foreign language: When we teach English what are we doing? We each have our personal priorities and concerns: paying the bills, ensuring that students/parents get what they are paying for, perhaps encouraging a little learner autonomy along the way and adding a little ethics (no bullying).

But beyond those intentions, are we not part of some larger historical project? What is it? Prometheus connected: liberation and fate after the digital revolution. EFL/ESL/ESOL/TESOL materials & resources for English teachers and students. Ken Robinson, the Element & the Iron Cage. The Element and Finding Your Element are Sir Ken Robinson’s venture into the self-help market, where he delivers a message that is, in one respect, the exact opposite of the message about education heard in his immensely popular TED videos.

In the latter we were told that the entire educational system must be reorganised around a supposedly new understanding of the individual child. In the Element books, which are basically about work and are aimed at people who feel unfulfilled professionally, there is no equivalent message about the workplace needing to be reorganised around a new conception of the individual worker. No, instead, people who are unhappy at work are told to hand in their resignation and find something else to do – something that enables them to be “in their Element” – an occupation in which they can do something they have a talent for and can love doing. Edtech and the Tool-Using Man.

At no time in history have people been so obsessed with their tools. Rubashov & G Dudeney on the digital challenge for education. We have been re-reading Darkness at Noon, by Arthur Koestler, and on page 136 the central character, Rubashov, makes some interesting remarks about the implications of technological development for education. Personalised education in the UK - history and politics of personalisation in public education. What is “personalized education”? Einstein and teaching at its best. Anti-schoolers are very fond of the following quote attributed to Albert Einstein: "Education is what remains after one has forgotten everything he learned in school.

" Perhaps Einstein ought to have said: "Education is what remains after one has forgotten everything one was taught. " The idea (for the anti-schoolers at least) is that teaching is bad. Teachers, despite their best intentions, do harm. Genuine learning occurs without the interference of teachers – teachers who make the ridiculously arrogant assumption that they have some deeper or higher understanding. The quotation prompts a question: Let’s say that you have forgotten all that useless information you were forced by teachers to memorise, what remains from all those years spent in the company of teachers?

Let me recall something positive from my own experience – a memory that has helped me to clarify what teaching at its best might be (assuming there could be such a thing as good teaching). Sugata Mitra TED talk on edtech and empire - a critique.