Did Media Literacy Backfire? – Data & Society: Points. Update: On March 9, 2018, I gave a talk expanding on my ideas in this post after a year of reflection/research. 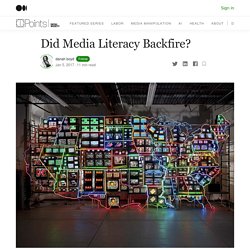 You can read the talk crib and watch the video at here: “You Think You Want Media Literacy…. Do you?” Anxious about the widespread consumption and spread of propaganda and fake news during this year’s election cycle, many progressives are calling for an increased commitment to media literacy programs. Others are clamoring for solutions that focus on expert fact-checking and labeling. The End of Theory: The Data Deluge Makes the Scientific Method Obsolete. But faced with massive data, this approach to science — hypothesize, model, test — is becoming obsolete. 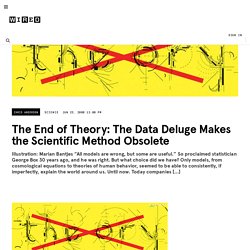 Consider physics: Newtonian models were crude approximations of the truth (wrong at the atomic level, but still useful). A hundred years ago, statistically based quantum mechanics offered a better picture — but quantum mechanics is yet another model, and as such it, too, is flawed, no doubt a caricature of a more complex underlying reality. The reason physics has drifted into theoretical speculation about n-dimensional grand unified models over the past few decades (the "beautiful story" phase of a discipline starved of data) is that we don't know how to run the experiments that would falsify the hypotheses — the energies are too high, the accelerators too expensive, and so on. Automated book-culling software drives librarians to create fake patrons to "check out" endangered titles. Two employees at the East Lake County Library created a fictional patron called Chuck Finley -- entering fake driver's license and address details into the library system -- and then used the account to check out 2,361 books over nine months in 2016, in order to trick the system into believing that the books they loved were being circulated to the library's patrons, thus rescuing the books from automated purges of low-popularity titles.

Advice for faculty members about overcoming resistance to teaching online. At nearly all colleges and universities, online education is almost never mentioned in academic rules that judge faculty members and determine if they advance. 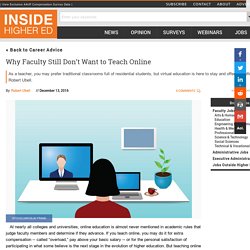 If you teach online, you may do it for extra compensation -- called “overload,” pay above your basic salary -- or for the personal satisfaction of participating in what some believe is the next stage in the evolution of higher education. But teaching online may not be a wise move to further your academic career. Teaching online can even be a dangerous career move, departing from the comfortable respectability of conventional classrooms for the exotic, suspicious digital world. Tilly and the Buttons – online sewing workshops. Module Overviews. #62 Screencastify: Easily record your screen using Google Chrome – #1minuteCPD. I recently stumbled across Screencastify when I was considering whether or not to buy a Chromebook. 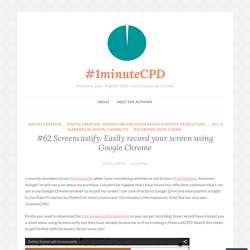 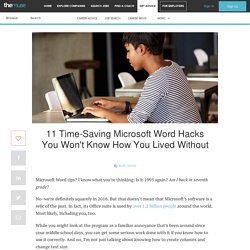 I know what you’re thinking: Is it 1995 again? Am I back in seventh grade? No–we’re definitely squarely in 2016. But that doesn’t mean that Microsoft’s software is a relic of the past. The Victorian MOOC - Hybrid Pedagogy. The death of the digital native: four provocations from Digifest speaker, Donna Lanclos. In these four provocations, anthropologist Donna Lanclos argues that the notion of the "digital native" is bogus and disempowering, that pandering to student expectations can backfire, universities should be open by default, and our attitude to educational technology needs a rethink. 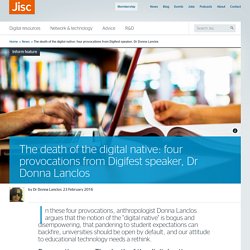 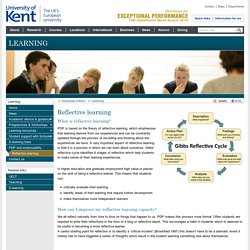 PDP is based on the theory of reflective learning, which emphasises that learning derives from our experiences and can be constantly updated through the process of recording and thinking about the experiences we have. A very important aspect of reflective learning is that it is a process in which we can learn about ourselves. Gibbs’ reflective cycle identifies 6 stages of reflection which help students to make sense of their learning experiences. In higher education and graduate employment high value is placed on the skill of being a reflective learner. This means that students can: critically evaluate their learning identify areas of their learning that require further development make themselves more independent learners. Android Academicals – learning technologies in EAP. I sometimes feel like a second-class citizen being an Android user in education – especially higher education. 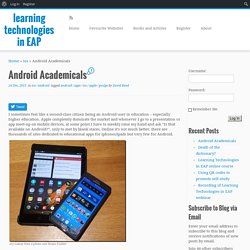 Apple completely dominate the market and whenever I go to a presentation or app meet-up on mobile devices, at some point I have to meekly raise my hand and ask “Is that available on Android?” , only to met by blank stares. Online it’s not much better, there are thousands of sites dedicated to educational apps for iphones/ipads but very few for Android. my Galaxy Note 4 phone and Nexus 9 tablet Ok, I get it, Apple own the education market. But it’s easy to forget that there are more Android users out there than ios users. For that reason, I wanted to explore the current state of Android within higher education: what apps are available for it, what advantages it has as an OS and how it compares both favourably and unfavourably to iOS.