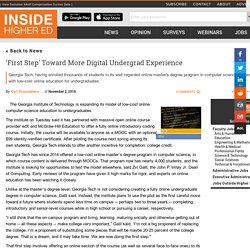 Working paper explores effect of online education growth on higher ed market. A federal rule change that opened the door to more fully online degree programs has not made college tuition more affordable, according to a working paper from the National Bureau of Economic Research, but at some place-based institutions, enrollment has declined and instructional spending has increased as a result. 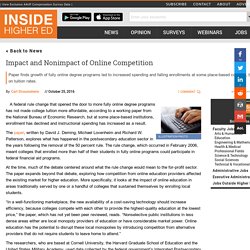 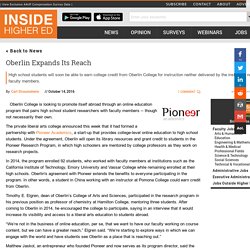 The private liberal arts college announced this week that it had formed a partnership with Pioneer Academics, a start-up that provides college-level online education to high school students. California's Online Education Initiative connects community college classes across institutions. Just a few years ago California's community colleges were dealing with a serious capacity problem. 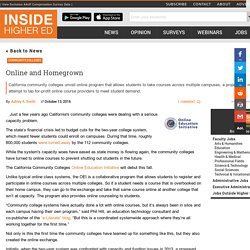 The state’s financial crisis led to budget cuts for the two-year college system, which meant fewer students could enroll on campuses. California's Online Education Initiative connects community college classes across institutions. So You Want to Work in Edtech? Higher Ed Edtech Conferences You Need to Know. Last year our team produced a free K-12 edtech conference map—and received an overwhelmingly positive response, as well as requests for a higher-ed version. 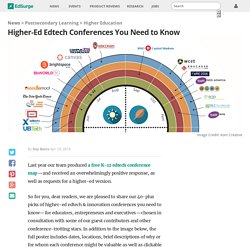 So for you, dear readers, we are pleased to share our 40-plus picks of higher-ed edtech & innovation conferences you need to know—for educators, entrepreneurs and executives—chosen in consultation with some of our guest contributors and other conference-trotting stars. In addition to the image below, the full poster includes dates, locations, brief descriptions of why or for whom each conference might be valuable as well as clickable names linking to a relevant website. And if you want to stay informed about higher-ed tech and innovation, consider subscribing to our free weekly newsletter, EdSurge Next. Click here to download a PDF of the full poster (with clickable links!) Green, red, orange, blue: What do these colors mean? Of course, anyone can attend any conference. Aw, you left out my favorite event! 323 learners eligible for credit from MOOCs at Arizona State U.

Less than 1 percent of the learners in the massive open online course partnership between Arizona State University and edX are eligible to earn credit for their work, according to enrollment numbers from the inaugural courses. 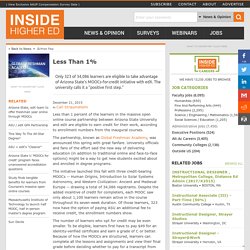 The partnership, known as Global Freshman Academy, was announced this spring with great fanfare. University officials and fans of the effort said the new way of delivering education (in addition to traditional online and face-to-face options) might be a way to get new students excited about and enrolled in degree programs. The initiative launched this fall with three credit-bearing MOOCs -- Human Origins, Introduction to Solar Systems Astronomy, and Western Civilization: Ancient and Medieval Europe -- drawing a total of 34,086 registrants. Despite the added incentive of credit for completers, each MOOC saw only about 1,100 learners remain active in the course throughout its seven-week duration. Confessions of a Community College Dean.

Year in Review: Top LMS Developments of 2015. As has now become a tradition, the Edutechnica team has compiled what we believe are some of the coolest developments and biggest challenges related to LMSs in 2015. New and evolving takes on what a LMS should be and do. EdX Stays Committed to Universities, Offering Credits for MOOCs. Coursera and Udacity appear to have found an answer—for now—to the business model questions that have plagued MOOC providers: partner with companies, such as AT&T and Google, design courses that support much-needed skills, then charge students to take them. 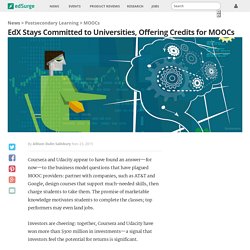 The promise of marketable knowledge motivates students to complete the classes; top performers may even land jobs. Investors are cheering: together, Coursera and Udacity have won more than $300 million in investments—a signal that investors feel the potential for returns is significant. So where does that leave the nonprofit edX, considered one of the “Big Three” MOOC providers?

Principal to N.Y. Gov. Cuomo: Stop spreading a false narrative about public education. Jamaal Bowman is the principal of the Cornerstone Academy for Social Action Middle school in the Bronx. 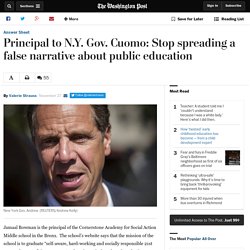 The school’s website says that the mission of the school is to graduate “self-aware, hard-working and socially responsible 21st century learners.” Cornerstone Academy’s curriculum, based on the Common Core State State Standards, focuses on improving the “creative, critical, collaborative and higher-order thinking skills” of students. Implementation of the standards and aligned testing in New York was widely described as a mess, and 20 percent of students across the state refused to take the Core tests this past spring as a protest. Cuomo took notice and in September, he created a task force to review the Common Core in his state. Ashford U's closure and what it says about for-profit higher ed. Ashford University is shutting its physical campus in Iowa, the latest in a series of recent closures of small colleges (many in obscure places) with shrinking enrollments and revenues. 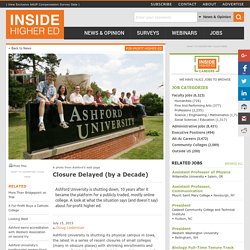 But Ashford, given its history and its owner, is far from just another private college. A Teacher’s Tale of Technology, Trust and the Struggle for Freedom. My students lived right across the street from our school. We could see the projects and apartments of Liberty City from the classroom. The history of the place spoke to the relativity of freedom. The housing projects where most of my students lived were built as a designated space for black families to settle in the 1930’s; a 6-foot wall was built around the area, barricading residents from the surrounding white farmers.

You can still see the rubble from that barrier lying along 12th Avenue. Here, riots over the death of an unarmed black man at the hands of police rocked Martin Luther King Boulevard 35 years ago.